by Heather C Holmes 10 months ago in psychological
Report Story

Careful who you accept a ride with 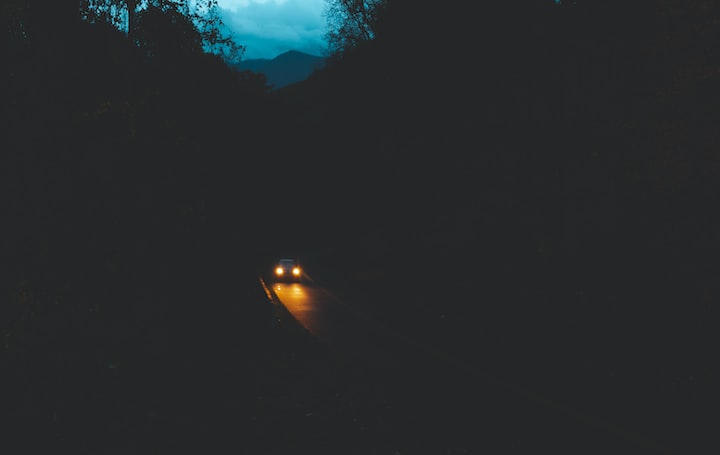 Photo by Joshua Woroniecki on Unsplash

Inky, black, and impenetrable darkness surrounded the compact sedan as it hurtled along the freeway. Stars shone in the cloudless sky. Last quarter of the moon naught but a silver sliver overhead.

Miles fell away behind the blue bullet. Music played at ear-splitting levels, driver popping the beat out on the steering wheel and belting the tunes out at the top of her lungs. Distance between her and the life she'd left behind growing by the minute.

"You're incompetent. There's no way you can survive on your own. Do you really think anyone would want someone like YOU?"

Tears prickled her eyes. Sobs threatened to erupt. She sang louder. To drown out that damn inner critic, in her abusive mother's voice, determined to tear her down.

"Are you listening to me, Peggy? You ungrateful little bitch?"

Marj, she'd not been Peggy to anyone but her mother in years refused to give her mother any more air time.

"No, mother. I don't have to listen to you any longer."

She glanced in the rearview mirror, the shadow of her mother in her mind, and commanded Siri to change the playlist. Her sexy Australian boyfriend confirmed her choice and the first track cued up.

David Bowie's Magic Dance from her favorite movie, Labyrinth, wafted out of the speakers. Her tears fell. She'd spent her childhood lost in the labyrinth, trying to find her own Goblin King. Someone to rescue her from the hellhole of her family.

"Remind me of the babe…" She was back in her room, watching the Goblin King dancing with the goblins. "… power of voodoo…" As the song played around her, wrapping her in the only warmth and love she experienced in her childhood, she whispered the one thing she wished had been true.

"You have no power over me." One long blink and she had herself under control.

Her mother's voice silenced, replaced by the remnants of the Goblin King trying to control Sarah. Marj whispered her truth, 'I ask for so little… fear… love… do as I ask and I'll be your slave.'

The rest of the soundtrack buoyed her spirits as she flew along the blacktop.

One lone street lamp sat at the four corners of a half-horse town. In the middle of nowhere. Marj slowed, just a touch, prepared to zoom by when a dejected soul caught her attention.

Slouched under the street lamp sat a young man. Too young to be on his own. Old enough to be some fun.

As Marj contemplated blowing through and leaving him in her dust, her foot hit the brakes. Her car slowed. The cat stirred in the carrier on the backseat. Bags, boxes, and her keyboard slid, hitting the front seat as the car stopped.

She wasn't sure why she'd stopped. Something about that poor soul called out to her. Marj squashed the self-doubt plaguing her and pulled over to the side of the road. He was her destiny. She could feel the pull between their souls.

He could be the one to help her heal from a lifetime of abuse and mistreatment. A lifeline to her new life. Her deliverance.

Screeching tires jolted the weary traveler awake, his head whipping back. Eyes wide, panicked, he grabbed his backpack and shot to his feet. He swallowed hard. Unsure of who, or what stopped for him. His feet made their way towards the car backing up along the gravel.

The blue sedan came to a stop, and a beautiful young woman stepped out beside the rear bumper. Lip caught between her teeth, she took a long, appraising look of the young runaway in front of her.

Their eyes met. She smiled, open and welcoming. His shoulders dropped. He relaxed, his sense of doom leaving him.

"Get in." She nodded to the passenger side as she opened the driver's door. "Heading a bit further down the road. Anywhere's better than here, right?" He grinned at her and tucked his backpack between his feet.

"I don't care where I'm going, just enjoying the warmth." He held his hands out to the vents on the dash. "Thanks for stopping. I'd seen no one in hours."

Marj waved him off with a gleeful, 'Pshaw,' telling him it was her pleasure.

"Nice to have the company, if I'm honest, she's not very talkative these days." She pointed to the backseat as the cat piped up with a confused 'meow,' sending them both into giggles. "I'm Marj. Do you have somewhere you're going?"

"Good to meet you, Marj." He reached over and took her hand in an awkward shake. "My name's Denny. I can't guarantee to be more talkative than the cat, but I'll try. I can at least be more entertaining, I hope." His grin lit up the dark car.

They chatted for a bit. Marj reached into the backseat, sharing her bag of chips and a soda with him. He found out she was heading to Springfield for a new job, telling her he'd stick with her until then. There was nowhere he needed to be, so they enjoyed not being alone. Together.

Denny settled back into the seat, relishing the comfort and company. He'd been on the run for weeks now. There was no way his luck would keep holding out. They were going to catch up with him, eventually. Dead is what he'll be when they track him down. So was anyone with him.

Memories of what he was fleeing ran through his mind. Thoughts of where he might end up haunted his every moment.

His mind relaxed, his body slack until he'd molded himself to the seat beneath him. One final deep breath and, for the first time in days, he fell into a peaceful sleep, the powerful scent of lavender and lemon wrapping itself around him.

"I know you taught me not to pick up strange men, Mama, but Denny's different," Marj's quiet voice paused while a deeper, raspier one answered her. Their conversation woke Denny not too much later.

"Don't matter, girl. You shouldn't have done it. You'll get yours, now."

"Mama, mama, please. Don't say that. I like Denny. He feels like the one I need right now." Marj's voice wavered in her response, her mother's influence over her clear. "Please like him, Mama. I want you to get along. If I'm lucky, he'll be with me for a long time."

A lick of fear, and a little something extra, ran through her words, stirring Denny's protective side.

Not wanting to highlight his newly woken status, he lay still, letting their voices wash over him. Curious about who she was speaking with, he stirred, turning his head towards her and settling back into a seemingly peaceful state of sleep.

"Mama, be quiet now. Please? He's stirring. Poor thing needs his sleep and strength for later." Marj's words brought dirty, sexy images to Denny's mind. He couldn't wait to see what he needed his strength for, but he was interested and, judging by the tightness of his pants, up for it.

"Oh, he's more important than your mother, is he? I'll just have to let him know who you are, won't I? You ungrateful little bitch."

His gaze landed on the dark screen of the dash and, confused, he wondered where the voice he'd heard came from.

Her phone's plugged in, but she's not talking to anyone?

The older, bitter woman's voice seemed to come from the seat beside him.

"Oh Mama, you know that's not true!" Marj placated the nastiness in her mother's voice. "You're so important to me, you know that. I always want you with me."

"I know that, girl. Sorry that I snapped. I just love you so much I hate the thought of losing you."

Denny watched as Marj smiled into the rearview mirror, the skewed words of love and devotion bringing new light to her face. Brows furrowed, he looked into her lap for her phone, wondering if it was just on speaker and not Bluetooth. He bit back a gasp when he found it.

It was in the cupholder. On the dash. Plugged into the Bluetooth system. There. Was. No. Phone. Call.

He watched her as she continued her conversation, bewildered by her actions, the raspy voice grating on his nerves. Unsure why he couldn't shake the feeling something was wrong.

Baffled, the young man peeped into the backseat, the lavender and lemon scent overpowering him as he turned.

Eager to see why she smiled, Denny's eyebrows flew up in surprise as they drove under another wayward streetlamp, its bright light lighting up the back of the car for a split second.

Behind the driver's seat, strapped in, sat an older woman. Dressed in an old housedress, fuzzy blue slippers, with a housecoat tied loosely at the waist, her dull green eyes stared ahead. Blank. Unseeing.

"Wonderful, you're awake Denny," Marj's cheerful voice and a friendly pat on his knee made him shudder, "And you've met Mama, too."

Denny was at a loss. He couldn't speak. A nod was all he could manage.

He watched a manic look take over her face. Eyes gleaming in the dashboard lights, she grinned and spoke, repulsing him with the madness rolling off of her.

"I'm glad you get along so well, Denny. We'll be together always."

Denny watched in revulsion as Marj spoke in the raspy voice he'd been hearing. No wonder he'd thought she was on the phone. The voice came from her seat. It came from her.

"He seems like a sweetheart, darling girl. You should keep him." A flash of silver, a nasty snarl, then the voice barked out, "He might be good for you after all."

Denny screamed in agony as Marj plunged a knife into his femoral artery. Blood spurted onto the windshield, dripping down the dashboard and glove box to coat his backpack in his life's force.

He pulled his gaze to Marj, her face flickering as he slipped into unconsciousness. The last thing he heard was her sweet voice croon the words that froze his heart.

"Together, forever, Denny." Her bloody hand smoothed his hair from his face. "We'll be together forever."

Prolific & Spirited Storyteller who refuses to be penned in by one genre.

Writes everything from thriller to humour to spiritual to romance and erotica.

More stories from Heather C Holmes and writers in Horror and other communities.