by Jefferey A Ayers 3 months ago in psychological
Report Story 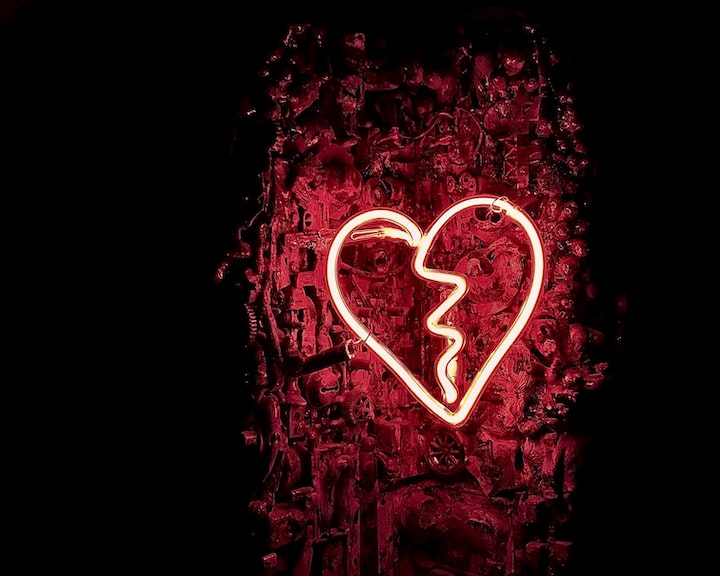 A movie played in the background, and we lay there whispering a million sweet nothings with no words passing between us. That was when I felt her soft touch as she ran the tip of her nose across my cheek. I turned to look at her and the world around us became irrelevant. All that mattered was right there in front of me. She had that “kiss me” look in her eyes, and for a brief moment, I forgot how to respond.

There was an intense vulnerability there as she stared into my soul. I spared a glance for those rose-red, slightly parted lips. It was at that second that I heard her breath give. As I shifted my gaze back into her shining, moon-lit eyes, she sucked the inside of her bottom lip between her teeth.

She leaned in, and everything about this moment screamed for me to kiss her. I felt the kinetic energy building between us, and I couldn’t resist.

Our lips met and every cliché became a reality. Sparks flew… My knees went weak… My heart raced… The world around me stopped… if only for a brief moment. That’s when I felt the brakes hit.

Her lips stopped responding to my touch and I felt her quiver as I pulled away. I opened my eyes and there she was, beautiful as ever, with a crystal tear running down her cheek.

“You still love him?” It was not an accusation, but a true inquiry.

“I do.” She sounded regretful. It was as if she did not understand that love is not chosen. You cannot move past loss by sheer will. “I’m so sorry.”

“Never be sorry for feeling.” It broke me to see such a beautiful creature in such torment. I could tell that she truly did want to love another, but was not quite ready to be unbroken, to let go and move on. So I gave her what her heart desired, but her mind would not allow her to ask for. I gave her a way to express the residual warmth of a love, come and gone. “Tell me about him.”

That night was spent with the head of a gorgeous woman resting on my chest, listening to the sound of my heart drumming a rhythm solely for her to hear, as she told me the story of falling in love, the fight for life, and the battles lost. She explained how the man who made her a widow managed to sweep her off her feet, and the joy she felt when he finally asked for her hand. She relived the fear of the diagnosis of cancer, and the toll it took to fight the disease. She shared the agony that threatened to swallow her when he closed his eyes for the very last time. For the sake of full disclosure, I must admit that it was not easy to listen to, but it was worth it.

When dusk gave way to dawn, I awoke and found her right where we left off. I ran my fingers through her hair, and she stirred. She lifted her gaze, opened those baby-blue eyes, and uttered something too softly for me to hear.

Life has a funny way of placing us in situations for which we are not prepared. How we respond to these moments is what defines us. Kiari was an unexpected gift. We were inseparable in high school, but life came between us. She went off to university and I stayed home. Long distance phone calls minimized the space between us at first, but the sound of your lover’s voice can only warm you so much. In the end, you still go to bed alone and wake up to a half-empty bed.

Eventually the gap became too great. The calls ceased. I didn’t get any more pictures and stopped seeing her in my head. Her voice became a faded memory of some background noise playing in the story of my life. I forgot about her, and I didn’t mind. That is… until I had heard the news.

She was getting married. By the time I found out, I had already fallen in love with another.

The day I got the invitation in the mail, I had a feeling that my life would change forever; I was right. I felt a curse lay over me. Something inside me snapped. Two days later, I had my first run in with one of my many accidents. My girlfriend fell asleep with a heater on, and it set her apartment on fire. The neighbors say that they saw nothing until they heard the screams and saw the smoke coming out from under her door. She suffered. In the end, she died with lungs full of smoke and charred, weeping skin hanging off of her dry corpse. This was the worst death of a woman that I loved, but it wasn’t the last.

My next girlfriend drowned in her bath tub. The police report says that she slipped when she went to get out and cut her head on the edge of the sink. This time it was the mother who found her. I can’t imagine what it would be like to walk in on your child lying face down in a tub over flowing with what could have easily been mistaken for watered-down cherry Kool-Aid.

After her there was the lovely blonde who hit a tree before we really had the chance to get to know one another. Her brakes gave out as she was driving over the mountain. A damn shame that it happened to occur on the same day her seatbelt and airbags malfunctioned. It was probably for the best. She seemed a bit on the bitchy side.

Finally there was the brunette who shot herself cleaning her father’s gun for him. The irony here is that she spent hours polishing the barrel and stock, but left red flecks of flesh littered across the wall and shit stains in her pants. She was a beautiful girl until she took a slug to the face. I wonder if her father still has that 12 gauge.

I never attended the funerals. I don’t like death; it just doesn’t smell right.

Four dead women in nine years. I told you I was cursed. I went through life one strange woman after another, wondering what the looks on each lady’s face would be like as she suffered through her last moments. There weren’t many second dates.

While I was wading through life, collecting corpses, Kiari was making memories. She got five happy years out of her marriage before her husband was diagnosed. The next three were full of doctor’s visits, chemo therapy, and an accumulation of debt. I watched death erase names that I would have forgotten in due time; she watched helplessly as the love of her life withered away. I do not envy her.

“What was that?” I leaned in so that I could hear what she said without forcing her to exert her voice. The scent of her repulsed me. You could smell death hovering over her. It was as if her husband was still there, pleading for her attention.

She leaned forward and kissed me. It lacked passion, a chaste peck on the cheek. She was so innocent, so pure. It is a damn shame that she had to have an accident. This one deserved better.

I gently caressed her cheek knowing that it would be the last soft touch that she would ever get to experience; apparently, she missed that memo. She pushed back against my hand. Turning her head so that my fingers moved towards the hair resting over her ear. I ran my fingers through it, around to the back of her head. I pulled her near and kissed her forehead, letting my other hand creep up towards her throat and getting ready for her to fight. They always fight.

The first one fought so much that I had to gag her and tie her to the bed. I don’t think I would do that again. Accidents happen. That is an important part of life. Shit, love is an accident. But, some accidents are easier to make happen than others.

I was right; she fought. She struggled from side to side clawing at my wrist. The feel of her nails digging into my skin was nearly as exhilarating as the look of terror in her eyes. She knew she was dying, and she knew I was the one taking her life from her. The sad part was that she didn’t realize how necessary this was. She was suffering in life, and I only wanted to set her free. You can’t judge me for enjoying it as much as I did.

When she stopped fighting, I held my grip for a few seconds longer, waiting until I could no longer feel the beat of her heart in her throbbing neck. The stillness of her body and the glazed peace in her eyes filled me with ecstasy. She had never looked as beautiful as she did in that moment.

I let her go and she dropped lifelessly onto my bed. I leaned in and kissed her one last time. I felt the warmth of her skin on my lips and couldn’t help myself. I knew I had to give her what she didn’t know how to ask for. There were no objections when I started to slowly remove her clothes, and that was all the confirmation that I needed. That was when we made love for the first, and the last, time.

When we finished, I didn’t say a word to her, for she knew how I felt; I really did love her. I climbed out of bed and pulled my phone out of my pants pocket, making the call that I have had to make too many times before, a call that I knew I would have to make again the next time I fell in love…

I am an aspiring writer who was born and raised in the Pacific Northwest. I joined vocal out of desire, and curiosity. This will be the first time I have put my writing out in the public, and I look forward to hearing what you all think.

More stories from Jefferey A Ayers and writers in Horror and other communities.