by Melissa Eaves 5 months ago in urban legend
Report Story 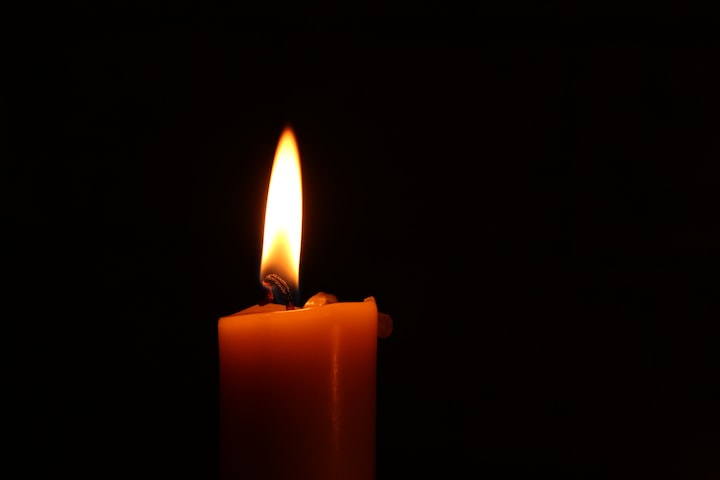 Photo by David Tomaseti on Unsplash

The cabin in the woods had been abandoned for years but one night a candle burned in the window.

They said that the woman that used to live in that cabin could be still heard singing on sunny days and in the dark nights the wolves were said to accompany her.

It was legend that the woman lived in that cabin for 100 years and hardly aged; she was said to have said it was nature.

But one night; a nice looking gentleman stopped by and asked for a glass of water. When the electric went out, in the country power outages were frequent so she thought nothing of it. She lit a candle and invited him to wait on the porch while she retrieved the water. He followed her in and it was said that the screams were heard for miles.

It is often speculated that she haunts the community to this day because impositions of courtesy was the method proceeding her violent and terrible death.

Her name was Clementine and the night she died an earthquake, a string of fires and several other uncanny disturbances were reported by the community. Many folks often wondered why no one who said they heard screams didn't go to help her.

After her death and the eerie events surrounding it, the community began looking into her life and all recalled extraordinary circumstances that they had never thought about before.

Like how she lived alone and always appeared serene and the day that she came walking into town and was seen turning to a pack of wolves that appeared to be following her and shooing them back into the woods. Or the day she came upon the kitty that was said to have died. It was the parade and the kitten had leapt from the wagon and gotten caught under the wheels. She was little girl named Anna's pet and actually a birthday gift. Anna would not be comforted.Well, Clementine picked up its little broken body and although Anna said it was cold, she reassured Anna with a knowing look and picked it up and breathed on it. That kitten, Shadow was its name, sprang back to life and never jumped out of any wagon again.

These and many other instances added to the lure.

No one was ever caught or implicated in the crime but the police that responded said they could never shake the chill they felt about the brutality and senselessness of the crime.

As the years passed weird things began happening in the town. Unexplained fires that people died in. They were always started by candlelight, right after or during a storm and power shortage. And one day they found the mayors son hanging from a tree, and at his feet was an empty glass that they swore came from her house.

It got so that nobody wanted to even walk down the dirt road and to the campsite that was popular near the river by her house. The young people would swear they heard singing and at night; wolves howling and a lady singing.

They would tell the story, and show the goose bumps to prove the strength of its truth. And the people listening would get goosebumps too, just so you know that's how you know when something is true.

The tales got eerier as the years progressed. The local authorities said it was just a case of excitable thinking and young foolishness. Then they laughed and said that the town would soon be organizing witch hunts.

But then it began happening every year, on the day she was murdered. As it went someone would always report a candle burning in the window and then someone would die. A local magistrate, a judges son, the football players wife, or some no account drug addict that was popular with the locals.

But it was usually someone prominent; the town started feeling concerned and began upping church meetings and determined that an increase in physical presences around the cabin might help disspell the ghastly occurrences.

It didn't help. It began being whispered that large groups of people were beginning to disappear. On the last year of the murders anniversary a whole group of campers disappeared; never heard from again and it was rumored that the wolves ate them.

And always there was a candle present.

Years passed uneventfully. Eventually people began frequenting the camp site that passed her house again as it was a popular teenage destination for freedom from prying adults. Once more the story passed into lore. Yet people still avoided the scene when the date of her death was known. As years passed, however, the date was forgotten.

And on this night a young drunk girl stumbled back into the circle of light cast by the fire and her friends and said, "Does anyone live in that cabin back there? There's a candle in the window."

More stories from Melissa Eaves and writers in Horror and other communities.