by Catherine Kenwell 5 months ago in fiction
Report Story 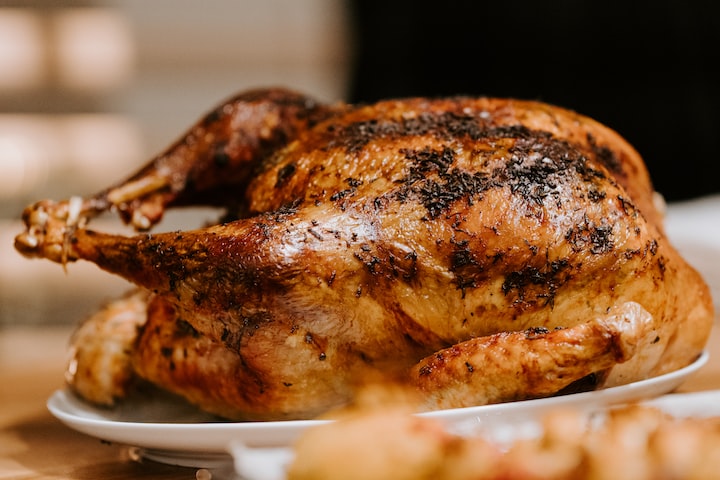 Christmas dinner was finally ready, and Nana called the family to the table.

The presents had been opened; fragments of wrapping paper had already lodged themselves into the sofa cushions and underneath the coffee table. Any initial excitement of the day had long since waned, and the family had retreated to its regular routine. But now it was time to eat and go home.

Nana’s grandkids Ashley and Logan, at nine and eleven years old, sat on the floor playing Lego Jurassic World on their newly acquired Playstation 4. Their and eyes and concentration were glued to the TV screen that was inches in front of them, and the silence between them was accented periodically with a ‘yeah!’ or ‘you suck!’ shouted from one or the other.

Their parents, Nicole and Brian, were at opposite ends of a long green sofa, tapping and thumbing away on their cellphones. Nicole had an almost-empty glass of red wine balanced between her knees. Brian absentmindedly picked up his bottle of Sam Adams, brought it to his lips, tilted the bottle and finding it empty, placed it back on the table at his side.

“Kids! Come on! Go wash your hands and get to the table!” Nana yelled once again as she wiped her hands on her apron. “Dinner’s ready!”

Ashley and Logan ascended to the next level in their game; all of their attention was taken with building and slaughtering their way through the game’s dinosaur world.

Brian was keying away at his phone, responding to a workmate’s meme about some long-ago holiday tradition. Ha, he reflected, how times have changed. ‘Hilarious!’ he posted. Nicole chewed at a hangnail while she watched a video of kittens falling off assorted beds, shelves, windowsills. It was pretty cute, she thought. Adorable kittens! Where did the Internet find this stuff?

Nana walked back into the kitchen, selected an old-fashioned glass from the cupboard, and poured herself two fingers of Scotch, neat. She took a sip, paused, and shot back the remainder. Ahh, she thought to herself. That was what she needed to get through this unappreciated meal with her ungrateful family.

She’d been in the kitchen for what seemed like a dog’s year, roasting the turkey, preparing the stuffing, mashing potatoes, baking Brussels sprouts and green beans and squash. She was exhausted, but for her, dinner was the day’s climax and afterwards, everyone would head home and she’d have her house to herself again.

“OK, that’s it,” she said, again raising her voice. “Get to the table right now!”

“I hate you,” grimaced Ashley through gritted teeth. “You cheat!”

“No, I’m just better than you, like I always am!” squealed Logan. “I’m gonna beat your ass again!”

Nana refilled her glass, this time with three fingers of Scotch. She parked herself on a stool at the side of the kitchen counter, and stared out at the dining room table. It was set with good dishes, real linens, the family silverware…why did she go to the trouble? No one ever used silver anymore. I wonder what it might be worth, she mused, probably nothing these days, just like most things that used to be of value. She could feel her blood pressure on low boil.

Every year, she thought. Every damned holiday dinner, we go through this bloody charade of happy families so why don’t they just stay the hell home if they don’t want to eat Christmas dinner with me. She remembered what it was like when her son Brian was small, when toys were soldiers and tanks and cowboys and guns. Kids were well-behaved back then; they were scared of their parents, and that was a good thing. It was a parent’s job to scare some sense into their kids. Now they don’t even talk to one another. Now they don’t even listen. And neither do their parents. She shook her head. She was quietly furious.

She slammed her empty glass on the counter, and raised her arthritis-achy body to standing. With some difficulty, she marched out to the living room.

“Did you hear me?” she shouted. Her face was flushed. “Dinner’s ready!”

First, she grabbed Brian’s cellphone. Then Nicole’s. It happened so quickly, their jaws dropped in shock. The kids turned from the TV, eyes the size of saucers. “Nana!” cried Ashley. “What are you doing?”

She reached over and grabbed the cords to the console, ripping them away from the stunned kids. With cellphones, cords and consoles cradled in her arms, she walked to the kitchen. Everyone leapt out of their stupors and followed Nana.

Parents and kids all watched as she ceremoniously dumped their toys into the greasy pool of sink water.

“There!” Nana exclaimed, brushing her palms together. “Now, maybe we can finally sit down to dinner!”

“OK, Nana, we’re sorry,” Logan muttered, still stunned and a little frightened by what had transpired.

In otherwise stunned silence, the four headed to the dining room table as Nana pushed them from behind. Each took their appointed seat; Brian at the head, kids on one side, Nicole on the other, and finally Nana at the other end.

“Now,” Nana said. “Brian, dear son, you can carve the turkey. Let’s get these vegetables passed around before they get any colder.”

Brian picked up the carving knife and fork, and began to break the crispy, glistening skin, carving into the juicy meat. His hands jerked back as he stared in horror. Large, wriggling white maggots crawled from the bird’s cavity. They fell from the knife to his plate, and continued their rolling pursuit, from the table to his lap. Before Brian could scream, Ashley dropped the bowl of Brussels sprouts. The little green-brained vegetables were covered in the blue fur of mould. Broken glass and fetid, syrupy sprouts littered the table. Meanwhile, Nicole had removed the lid from the potatoes and gagged, then vomited onto her plate. What were once potatoes were rotten, putrid and black in the serving bowl.

Logan, witnessing the chaos, shrieked in terror, which broke the familial stupor. The kids and grandkids knocked over their chairs and ran for the door, all the while screaming and crying.

Nana remained at the end of the table, a small resigned grin curling her mouth. “Now that, my dear children, will teach you to come when you’re called.”

More stories from Catherine Kenwell and writers in Horror and other communities.