A Silent Call in the Night 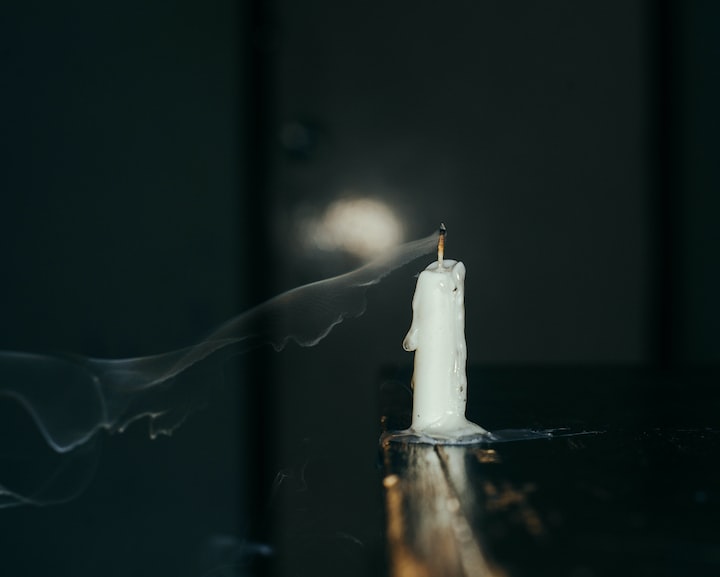 Photo by Mishal Ibrahim on Unsplash

The cabin in the woods had been abandoned for years, but one night, a candle burned in the window. The light of the flame, too weak to clutch the edges of the room, barely registered on the window pane. If the moon had journeyed any further into the sky, its light would have caressed the face of the shack and Bill wouldn’t have noticed the candle at all.

Twenty years, Bill thought, twenty years almost to the day, that eyesore has been rotting there. I should know - it’s on the lot right next to my cottage. Bill wished he could hire a crew to level it so he would never have to gaze upon it again. Funny, he thought, a cabin that has sat unloved for that long was known as the Lover’s Cabin.

The story told of a couple building a retreat in these woods. Building a life together and realising the dream of a humble home by the water where they could raise their little family. Nearing completion of the cabin, the couple celebrated with wine and a midnight swim in the cool waters of their lakeside oasis. Somewhere in the night the dream, and the wife, were swallowed by the waters of the lake. The husband searched tirelessly for his love, but the wife was never found. Grief stricken, the husband’s despair was too great to overcome and the cabin, a constant reminder, was abandoned.

Bill turned and shouted, “Get outta there you kids.” Must be teenagers in there partying or messing around, or both. It wouldn’t be the first time Bill had to set a few teenagers straight. “Leave now, and I won’t tell your parents.”

Bill’s cottage was one of the first built on the lake. Everyone knew old Bill and that he liked his privacy. He didn’t mind kids, as long as he couldn’t see or hear them. He certainly didn’t care for kids partying anywhere near his place, and that included the old cabin next door. Damn kids will probably burn the place down… which wasn’t a bad idea, except the whole forest would probably burn with it.

“Don’t make me come up there” he barked. Bill paused for an answer but the cabin remained silent. The moon cast a glow on the path leading up to the place, a narrow rut the forest couldn’t quite reclaim.

Bill took a step towards the cabin and was overcome with a chill. He clutched his jacket at the neckline, happy he decided to wear it. Bill continued toward the shack on that crisp fall night, the candle light from the window guiding his way. The flame flickered inside, and grew a little stronger with every step he took.

As Bill neared the porch, the stillness made him shiver. He didn’t think it was teenagers responsible for the glow in the window anymore, but he was beginning to wish it was. He squinted to get a better view inside the window but the narrow beam from the candle was still too weak.

“Is there anybody in there?” he called, suddenly aware that he wasn’t sure if he wanted a response or not.

A shadow passed before the candle. Bill jumped, his breath caught in the cool night air, and he cautiously backed off the porch. Missing the last step, he back-peddled over a stump beside the pathway and landed on his backside facing up at the cabin. The commotion on the porch jostled a small wooden sign attached to the railing, which creaked noisily as it rocked back and forth trying to steady itself on its rusty nail.

“Catherine’s Cove” it read. The letters burned into the wooden plaque were only visible as it swung to the left, the moonlight creating the illusion of a flashing sign. Bill got to his knees and propped himself up using the stump that had stumped him. His hand then fell upon the handle of the axe that was buried deep in its centre. Bill got to his feet and pried the axe free.

With the security of the axe in hand, Bill rushed the steps, grabbed the latch of the door and quickly stepped inside before his nerves could talk him out of it. The chill of the room gripped him as he quickly scanned the space for any movement. The open door did little to illuminate the cabin's interior, so it barely registered with Bill as it slowly swung shut. Bill was left with a single flame at the centre of the room, and whatever lurked in the shadowy reaches beyond.

Bill tightened his grip on the axe as he approached the candle. His breath was short and hung in the air. It’s colder in here than it is outside. The outline of a figure came into view and ventured toward the candle, quietly closing in from the far side of the room. Bill was nearly close enough to touch the flame, when it sparked brilliantly and chased the shadows away. The axe slipped slowly from Bill’s fingertips to the floor and his body stiffened, paralysed as the figure’s face came into view.

Catherine smiled but no warmth was added to the room.

Catherine held a second unlit candle in her hand and let it kiss the first. As the second candle began to take hold, a shock of cold cut through Bill and gripped his chest. Bill’s mouth fell open but he couldn’t manage a sound. He saw himself lying by the woodpile, staring up at the sun in the midday sky, a hand clutching at his heart. The other hand was searching aimlessly for the small metal tin that sat ajar on his stomach, its tiny pills scattered in the folds of his shirt and amongst the pine needles lining the forest floor.

Bill refocused on the cabin and Catherine, her smile broadening in the light of the second candle. There was a pounding. Bill thought his heart would explode. The pounding grew louder and a voice called out. The flame of the second candle began to climb. My candle, he realised, panic setting in. As the flame grew stronger, Bill could feel his strength leaving. His eyes were heavy, his body light. The pounding was deafening. The voice would not relent. Why is it so cold?

The door of the cabin thrust open and a scream tore through Bill’s mind. A swirling gust of wind swept across the room and extinguished the flames of both candles at once. Everything went black.

The light was blinding. The sound was muffled and distant. Bill had to close his eyes again. He felt a tickle of warmth on his face. His nose twitched at the faint waft of pine, while his ears began to softly hum a song of cicadas. His body felt tired, but he could feel his strength returning. When Bill next opened his eyes, a shape had pulled in close to block the sunshine. A familiar face started to come into focus, and then everything rushed back all at once.

“Close, it’s your daughter, Casey. Thank god you’re alive… let’s get you out of the sun.”

Casey took Bill’s arm and helped him to the cabin. She sat Bill in the single wooden chair at the dusty table inside and proceeded to light the candle at its centre.

“I thought I lost you dad. Just hang on - the ambulance will be here as soon as it can.” A tear left Casey’s cheek to make room for the next. “Thank god I put that tracker on your phone… and you had the damn thing with you.”

His panicked daughter ranted away as Bill gradually came back to life. He stared at the candle on the table and relaxed. It didn’t hold the same chill. His fingers began to tingle and he could feel the stuffy warmth of a cabin perched in the midday sun.

“… and I can’t believe I made it in time. What were you doing over here anyways, Mom hated this place? She always preferred the main cottage. I’m going to have to put a bell around your neck to…”

Bill managed a weak smile as his daughter carried on. The care and panic in her voice replaced with fear and anger. Fear of losing her father and anger that he would abandon her.

“What’s that Dad?” Casey asked, “You think Mom is lonely?” Casey stopped her pacing and knelt at her father’s side, with renewed concern. Bill was surprised that she heard him at all over her own little tirade. “Are you sure you’re sure you’re -

“Help is on the way. Hang in there.” Casey resumed her frantic pacing. She circled the room, opening cupboards, searching shelves, and doing anything to keep busy. “I can’t even give you a glass of water. It’s not hooked up.”

“I miss her too Dad” Casey called from across the room. “Don’t worry, one day you will see her again… but not for a while OK?”

Bill chuckled to himself as he leaned back in his chair. We can both see her again right now if you just pry loose the floor boards where you’re standing, honey. The colour had returned to his face and he decided to undo a couple of buttons on his shirt. It was going to be a hot one today. All those years searching the lake, but never once did they think to look in the cabin. And as long as this cabin sits here undisturbed, they never will find you my love.

Casey returned from her snooping and set a second candle on the table. She flicked the lighter but no flame caught. A second try resulted in a few sparks but nothing more. “I can never get these things to work.”

Bills eyes widened. “Don’t light that!” he cried out. “One candle is just fine!”

“Don’t be silly Daddy. It’s dark and musty in here” Casey said, as her third try caught. Casey lit the second candle and a chill shot up Bill’s arm and into his chest. He clutched the collar of his shirt and a damp coolness washed over him. The colour drained from his face as he watched the flame of his candle climb high. “Isn’t that better?”

Casey leaned forward to give her father a reassuring smile, but no warmth was added to the room.

I love to tell tall tales. I've determined that I am left with two career choices - a writer or a fisherman. If you like a little humour tucked in with your tale, give my stories a try. If things don't work out, I'm buying a boat.

More stories from Dan Ormerod and writers in Horror and other communities.