by Bazooka Teaches 4 months ago in monster

My experience of having to show no fear against these evil nomads.

Have you ever heard of black-eyed children? I have. Well, these black-eye children are supposed to be tricksters. They supposedly like to trick people into letting them into people’s dwelling. Usually, they approach people in cars at night when the person is all by their lonesome. They claim to need help and want people to open the door to let them inside. Of course, these kids have black eyes and usually spook their intended victims. These black-eye children are believed to be evil demonic nomads.

Again, most people that have seen them say that these black-eyed children have tried to invade their space by asking to come into their house or car. These evil nomads pretend to be children act out the need for help most of the time.

In other words, black-eyed children come knocking on your door or on your car window. Of course, this always happens at night. Additionally, they do not really reveal themselves until the last second. Sounds very cliché of a horror movie, right?

Not much has been said what happens if they do manage to dupe a person into opening their door and letting these kids into their car. Some say that these entities will kill a person once invited into their victim's home or car, and others say that the person or victim will simply go crazy. Who knows?

When I was living in Hollywood, I woke up, as I fell asleep on my lazy boy while watching TV. During those days, I was somewhat lost in despair and was spiritually lost. Anyway, I noticed that the doorknob to the only door seemed to be turning, for I lived in a one bedroom apartment.

I heard someone outside, and I could see a silhouette through the window that was right next to the door. As I got up to go look through the window, I heard footsteps retreating from the door. I quickly moved the blinds to see and saw nothing. Then, as I was going to retreat back to my lazy boy, a movement caught my sight.

Underneath the window, on the outside, sat a boy that looked like he was about nine years of age. He was looking down and trying to hide from my view. I stood there looking down at him. 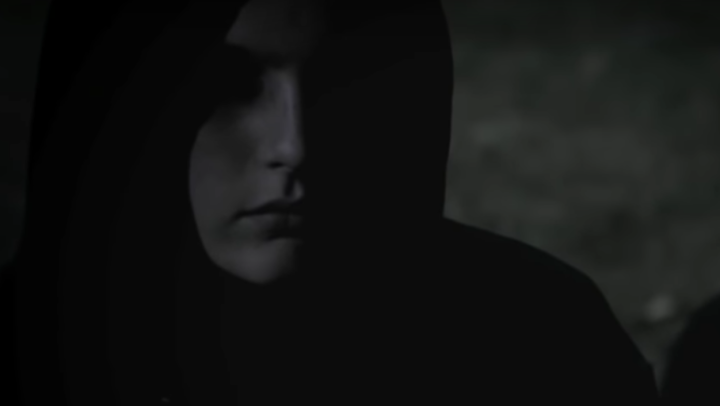 He finally got up quickly and started walking away. As he looked back, his eyes looked black. I kind of got surprised when I took a deep look at his black eyes. I didn’t open the door because I felt something was weird about him. Also, why open the door anyway! It was like three in the morning.

I don’t really get spooked with supernatural happenings, for I have seen spooky things in my life. So, this kid did not quite get me despite the fact that I knew that he was not from our realm. I just stood there and looked at him. He was kind of Asian looking.

When he got about 15 feet away from my window, he turned his head away. His eyes were no longer visible. His face was not fully concealed when he was looking at me as he wore a red hoodie. The light from the hallway gave away eyes though, and that light did when he turned once more with a smile.

He stood there looking as if trying to intimidate me. I just kept staring at him. I was so messed up during those times. I was a suicidal man in many aspects of my life. I did feel fear but instead intrusion. I tried to show him that I didn’t give a damn about him being there. He didn’t scare me.

This little evil boy smiled with his black eyes and went down the hallway. I watched him go down the stairs. See, I lived on the second floor. I didn’t see him continue out into the street though. I didn’t give a shit.

I know that I could never open the door for that little fucker, but I was never going to give him the pleasure of scaring me.