by Ada Zuba 2 months ago in supernatural
Report Story 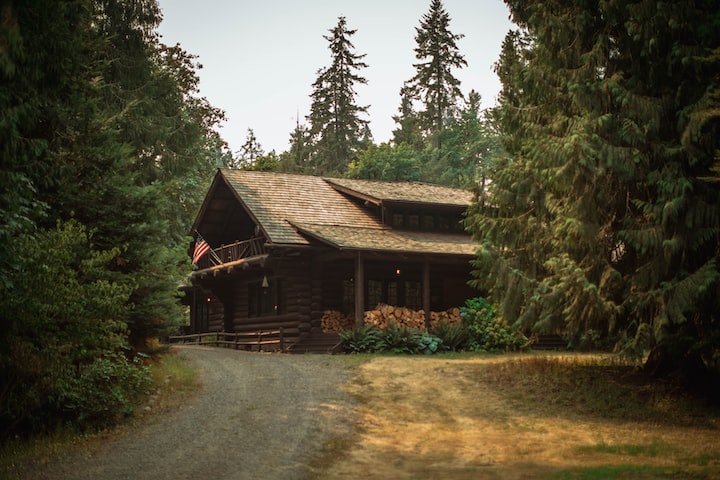 The cabin in the woods has been abandoned for years, but one night, a candle burned in the window. The cabin was isolated from everything and away from wandering hikers, most people avoided it as many bears wandered the area. Tonight, though, tonight was different as the candle meant that someone was there and they were not supposed to be…and terrible things happen to those that do visit. A lone hiker with his german shepherd dog who had got lost off the trail stopped by, he wore a red plaid shirt that was torn on his upper sleeve by a branch earlier and a gray vest with a hood on top. His hair was brown with woven strands of gold and auburn almost fall colored. His eyes were tired and copper hued. The stairs creaked with warning as he took a step towards the door of the cabin. The man walked onwards and with a crumbling thud one of the stairs broke making a hole where his foot stood. He stumbled a bit but caught himself and went for the door. The door was left ajar and it made a soft groan as it slowly swung in the slight wind. His dog followed the man behind him. The dog sniffed the air and let out a whimper of fear. It was odd that a candle would be burning like this though.

“No one is here,” he reassured his dog. He looked up at him with uncertainty. The man crouched down and patted his dog around the neck.

“We’re fine Red, we’re okay,” he said. They walked throughout the cabin to see if any other travelers had been around, but as they walked through the abandoned building dust rose from where their feet fell from years of not being touched. The floorboards creaked and squealed as they walked from room to room.

“We can stay here, I guess and I can look at my map and figure out where we are,” he said. The man took the candle that was burning in the window earlier and he sat down and shone it over his map. “It’s strange that this candle was lit though,” he said and he started to study the map, when a cool breeze swept through the cabin and with a flicker the candle was out. Red let out a whine. The man took off his backpack and found his matches,he lit one, but it went out too fast. He lit another and just as he was bringing it close to the candle it went out.

“I will save them for the fire,” he said. He stood up and placed the matches by the windowsill. The man went out into the forest and grabbed his hatchet that was in his backpack and he chopped up some wood. He carried it back into the house and his dog, Red followed him. The man loaded up the fireplace, it was filled with ash and dust. He placed the firewood in a log cabin set-up and he reached for the matches, but they were no longer on the window sill. He had not moved them, he was sure. He searched his pockets anyway.

“Are you looking for this?” asked a deep, strong scottish accented voice behind him. The man spun around to face a man whose face looked worn and tired, he had pitch black hair that looked like a starless sky, his beard was black with flecks of white starting to come in, he wore a black overcoat with the collar pointed towards his chin, his boots were large and heavy. All his others clothes were blakc underneath and he wore a few chains around his neck.

“Who are you?...wait… I know you,” said the man as he slowly recognized the wanted fugitive that stood in front of him. “You’re the guy that kills supes aren’t you? What’s your name? Butch?”

“Actaully it’s Butcher,” he said. He lit a match and watched it go out.

“Hey, I have only one match left,” complained the plaid jacket man.

“Doesn’t matter now don’t it?” said Butcher and he flashed a grimming smile.

“I am not a supe, I am an ordinary guy! My name is Kirk Douglas, I swear I don’t have any powers,” said Kirk he felt his face get red hot and sweat dripped down his back, the hairs on his arms stood on end.

“Butcher!” yelled a young man, at least he looked young, for a young guy he looked like hell. His eyes were sunken and had dark circles under them, his skin was pale and ghost-like, yet his face still looked baby-like. “What are you doing with this guy? We need to let him go, he’s not a supe,” he said, interjecting between Kirk and Butcher.

“Kirk? Do you have ID on you?” asked the young looking man.

“Yeah,” said Kirk and he knelt down with his backpack and took out his wallet. “Butcher, this guy is telling the truth,” he said and he tossed the ID back at Kirk. Red growled with alert and he strode towards the door still growling.

Then they heard a loud and fast noise coming from outside and a large wolf leaped over Red the german shepherd and it came in growling, it was nearly as tall as Butcher. It teeth were snarling and it snapped at Butcher, but it’s attention was drawn to Kirk, and it was letting out a low growl that made the cabin quake. It faced Kirk and he back up in fear.

“What the hell is that?!” shouted Kirk.

“It’s why were here,” said Butcher and he drew his pistol and shot at the beast, the bullets ricocheted and fell to the floor. The wolf redirected at Butcher and out of nowhere Red came in at the thing and bit the neck, the wolf swatted Red down and left the dog unconscious.

“Hughie!” shouted Butcher and the young man, known as Hughie.

“When I say run, we run!” he instructed. Butcher lit the last match and he let it fall to the ground. The three men ran for the door, Kirk was holding his dog when they burst out of the cabin. The wolf was closely behind, Hughie was quick and locked the door.

“Where is that precious girlfriend of yours?” cursed Butcher.

“She’s not coming,” Hughie said. Kirk was by his dog crying. Butcher rolled his eyes and he grabbed a pocket knife and waited for the wolf to come through the door as the cabin burned, the trees were starting to catch fire.

‘What did you guys do?” said a feminen voice behind them, it was Starlight. “This guy is innocent!” she said. “Can you hold on to me?” she asked Kirk and he nodded as he also picked up his dog. She flew off with Red and Kirk and they floated up until the burning cabin and forest was a dot and all he could see was black smoke from where the cabin stood burning.

More stories from Ada Zuba and writers in Horror and other communities.