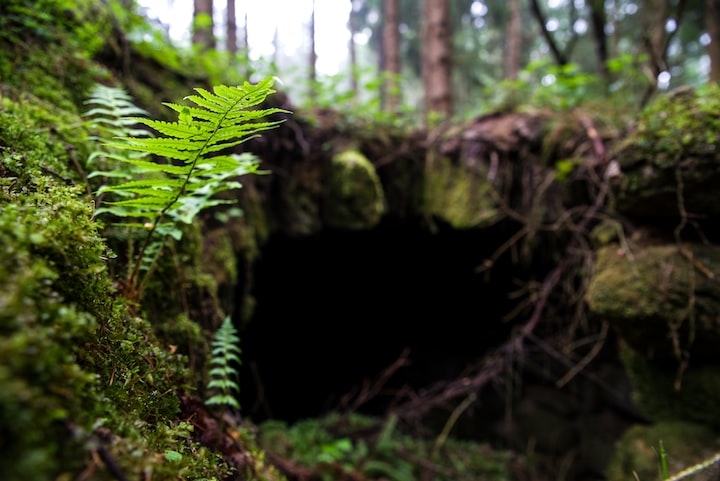 Photo by cubicroot XYZ on Unsplash

Peter was born in the mountains of rural Virginia, where he spent his childhood days exploring the tree-covered hills and grassy valleys surrounding his home. As he reached his pre-teen years, he became fascinated with the multitude of caves tucked away all around the area. Peter’s parents supported his newfound interest, placing only one restriction on his explorations. He must never, under any circumstance, enter Angie’s Cave.

Of course, putting it off-limits only piqued his curiosity. The mystery drew him like steel to a magnet. He asked his mother and father why it was called Angie’s Cave. They just told him it was a dangerous place and offered no further detail. Since his folks were a dead end, he went to friends and neighbors for answers, but the information was sparse. During a family outing at the county fair, Peter came across an elderly gentleman willing to talk about the cave.

“According to legend,” the old man began, “about 100 years ago a young girl came across the cave while picking wildflowers. No one knows why she entered the opening, but the search party found her basket of flowers and her bonnet by the mouth of the cave.

Several volunteers went in after her. Only one survivor returned to the surface. He told the story of an endless shaft winding its way under the mountains. He said they could hear the girl’s voice just ahead in the darkness, but when they approached the location where they thought she was, the light from their torches revealed more tunnels. When they finally gave up the search, the rescuers realized they were hopelessly lost. The group split up, with only one making it out alive. The survivor told anyone who would listen about the echo of her voice following him until he reached the opening. Shortly after his escape, the man went mad and took his own life. No one has been in there since.”

Peter was fascinated by the story, as any young boy would be. He was about to ask the old man where the cave was when his father placed a hand on his shoulder and told Peter it was time to go. Several weeks passed and, try as he might, Peter could not get the story out of his head, so he searched for the cave.

The day had turned to dusk when Peter heard a faint voice drifting from behind a stand of birch trees on the hill just off to his right. Curiosity piqued; Peter went to investigate. On the other side of the trees was the opening to a cave he had never seen before, and coming from the fissure was the faint, unintelligible voice. It was growing dark. Peter hesitated, knowing it would be a mistake to enter any cave without a light source to guide him. He was about to turn away when the opening flickered to life with the phosphorescent light from hundreds of glowworms.

Peter froze in mid-turn. The eerie voice was both terrifying and enticing. His apprehension slowly melted away. Peter took a step towards the mouth of the cave when he heard several distant male voices warning, “Runaway... away... away. Danger... danger... danger., Leave now... now... now.”

When Peter failed to return home for supper, his father and a few neighbors searched through the night. They found him sitting next to a cave opening, catatonic and frozen in place. “The echoes... echoes... echoes,” was all he could mutter.

Peter was brought to the hospital for treatment, but the doctors had no idea how to treat his condition. The next day, the cave entrance was bulldozed closed, never to be opened again.

More stories from Mark Gagnon and writers in Horror and other communities.