by Tom Baker about a year ago in movie review

I first saw Frankenstein, the 1931 classic starring Boris Karloff, Colin Clive, and Edward van Sloan, on a black-and-white tube television in Central America. It was Halloween night, and I had settled in with popcorn and treats. Delivered, I was, from the hot and sticky boredom of my life for a little over an hour, as the opening credits gave me a primitive cinematic experience that first hypnotized with a swirling circle of mysterious eyes. Superimposed over this was a featureless face. And the music was ominous, orchestral, and beautiful, pouring forth from the tiny speaker.

It began with the tolling of a funeral bell, amid a Universal backlot masquerading as a boneyard in some land that is neither England or Germany, but is somehow both. Stark and grey, with claw-like tree branches reaching up toward a streaked, joyless sky, it isn't until you watch these old films on an actual theater screen (I have), that you realize the set designers of the period really did manage to create a world that is a sort of alternate universe. These films were NOT made for small television screens.

Henry Frankenstein (Colin Clive) and his weird, dwarfish assistant Fritz (Dwight Frye) are lurking in the churchyard, waiting to rob the grave recently filled. Afterward, they depart to a crossroads; the body of a condemned man still hangs from a gallows. Medieval, to be sure.

Fritz doesn't wish to shimmy up the gallows and cut the noose, but does so anyway. Henry assures us these bodies are, "Just resting, waiting for new life to come." Here we have the first stirrings of his mad dream.

Brains (both Henry's and the Monster's) play a significant part in this version of Frankenstein, so when one brain is rendered unusable, Henry realizes he must have another. The luckless Fritz is sent out to retrieve said brain from the Ingolstadt Academy, where a Dr. Waldman (Edward van Sloan) holds forth for students fresh from the belly of the Roaring Twenties.

Fritz sneaks into the dissecting lab, drops one damn brain, and absconds with one labeled "abnormal." What the hell? It's all the same to illiterate horror movie hunchbacks.

Meanwhile, in faraway House Frankenstein, Elizabeth (Mae Clark) and Victor (John Boles) are worried by ominous suggestions in Henry's letters, all about forestalling a romantic reunion between himself and Elizabeth until he can "complete his experiments." Taking their concerns to Dr. Waldman (Edward van Sloan), they find out that not only is the subject of Henry's obsession to restore life not to animal but HUMAN subjects, but that he, at one point, asked Waldman to procure for him bodies... fresh specimens. The three of them pay an impromptu visit to the old, tottering medieval tower wherein Henry has his lab.

They pick a good time to come calling. The weather is wild and wicked, and Henry is flying kites in order to harness the natural current needed to power his hulking flesh golem, the "Monster" (Boris Karloff). Just when he thought it was safe to try and bring to dreadful animation the stitched-together body he has made from stolen corpses, here comes friend, professor, and blushing bride-to-be. 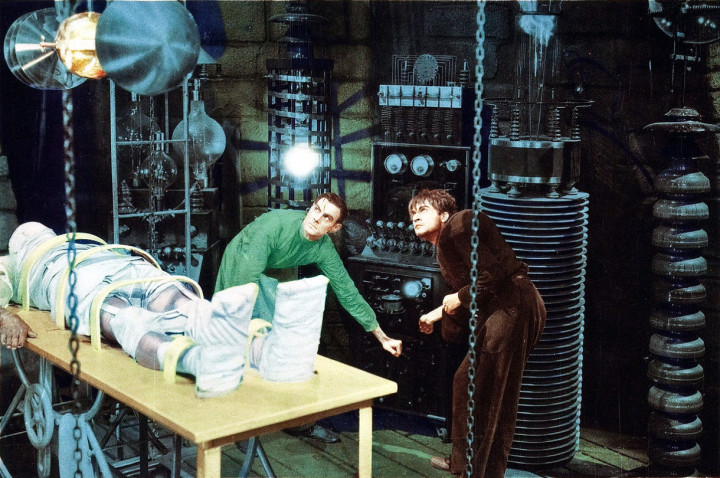 "Now I know what it feels like to be God!"

Henry proceeds with the project despite the unexpected interference. His kites conduct the lightning down to dynamos, sparking gadgetry, Tesla coils, and other such bizarre apparatus, and the bandaged body is lifted to the opening in the ceiling via chains hooked to a dissecting table. Brought back down after the fireworks, the huge, scarred hand begins to move slightly, sending Henry into some pseudo-religious, apoplectic fit of blasphemy. Declaring famously, "It's alive!" in a near-pathetic nasal screech, he furthermore intones, "Now I know what it feels like to be God!"

Foreshadowing of future doom, we take it. Never spit in the eye of the Divine.

The creature is revealed slowly. Apparently, women at the time of the film's release were so shocked by the hideous makeup of monster artist Jack Pierce, they ran from the theater screaming. But, the modern viewer has seen the iconic Karloff as the Monster so many times, it will not really phase him or her; except for a certain cadaverous, dead-eyed close-up that suggests the pathos of the mentally deficient or physically malformed.

Henry and Waldman confab, Henry quite pleased with himself and his success. Waldman informs him that, indeed, the brain inside THAT particular horror was a brain of a criminal, an "abnormal" brain. The Monster is brought in for examination. Fritz comes in, scares the holy hell out of him with his torch. Remember this plot point for later, as Fritz is an undeniably sadistic and bitter little troll who seems to take delight in torturing poor Boris with the one thing the hulking brute really fears... fire. (A fear of the natural element, the "God forces." From a creature unnatural to the birth cycle of creation, this is a certain metaphor. The fire is the "divine spark," after all.) 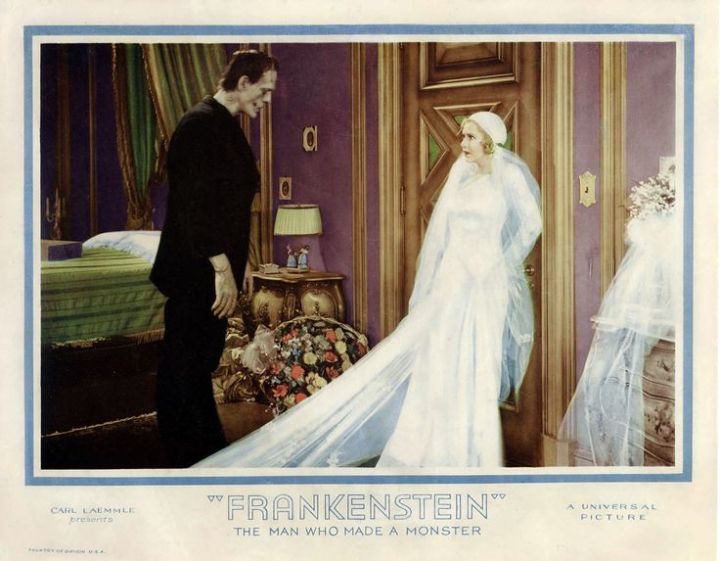 "I will be with you on your wedding night!" Elizabeth (Mae Clark) is confronted by the hulking menace of the Monster (Boris Karloff) in the 1931 adaptation of Mary Shelley's Frankenstein.

"I will be with you on your wedding night!"

"I will be with you on your wedding night!" is a promise made by the Monster in Mary Shelley's original 1818 novel, Frankenstein. That novel is a saga of incalculable historical importance, one of the all-time classics of Western literature. In that novel, the Monster ("Adam") is an articulate, reasoned yet hate-poisoned victim, only seeking the love he feels a father has denied him. An autodidact, of sorts, he is Shelley's stand-in or approximation of Milton's Mephistopheles, contemplating the exile of himself in Hell, amid the pleasure and pain of a fallen world.

In James Whale's Frankenstein film, made over a century later, in a medium that Mary Shelley could never have dreamed would ever one day exist, the Monster is an inarticulate caveman, a hulking brute afraid of fire: Confused, rejected, miserable, and tragically despised and discarded by his own creator.

Fritz gets himself killed, tormenting the chained horror with his torch. The Monster is rendered incapacitated, but, before Professor Waldman can dissect him and put an end to the nightmare, the creature comes back to life, silencing the doctor permanently and escaping into the surrounding countryside.

Meanwhile, Henry has gone back home with Victor, his father, Baron Frankenstein (a doddering, harrumphing old caricature of a curmudgeonly Victorian Englishman, played by Frederick Kerr), and Elizabeth. The plan is for Henry and Elizabeth to finally marry. The Monster, who famously intoned in Shelley's novel that he would be with Frankenstein "on his wedding night," makes good his promise here, too, and Elizabeth is startled after a confrontation with the creature, who has somehow found his way to her bridal boudoir.

While the woman convalesces, Henry is drafted into finding his creation by angry villagers wielding torches, pitchforks—the whole mad, medieval lynching scene. The Monster, you see, has killed a small child. 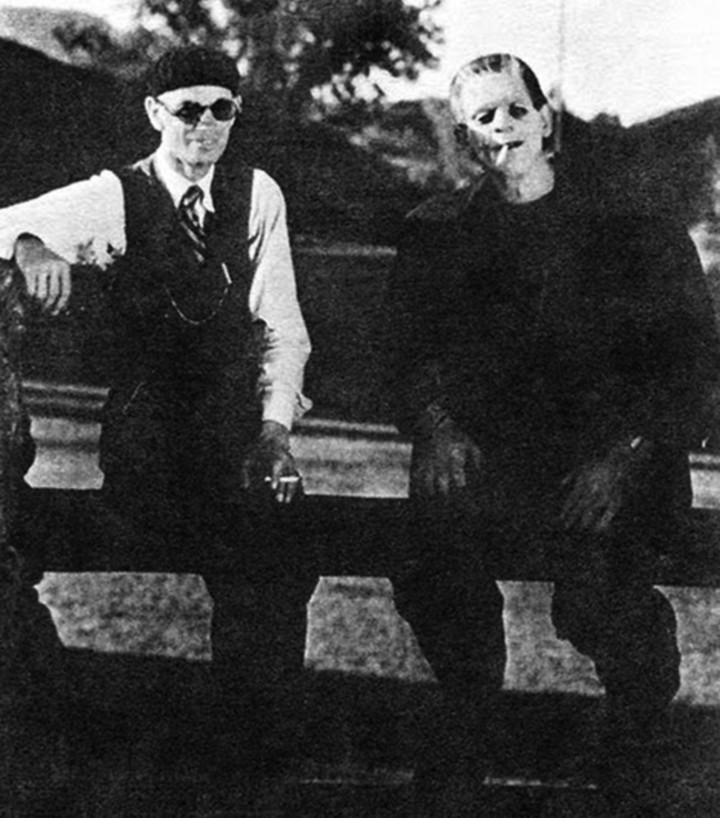 Director James Whale and actor Boris Karloff, relaxing between takes on the set of the original Frankenstein (1931).

Floating is one thing the little girl, Maria, most certainly does NOT do, after the confused Monster, having had fun playing with the child, throwing pretty wildflowers into the lake, then throws HER in after the flowers are all gone. He didn't, of course, mean to actually harm her. He's just a giant, monstrous child himself. No matter, though.

Her stricken father, finding the body, carries it back to the village in his arms, whereby the burgomaster organizes a posse joined by none other than Henry Frankenstein himself. All of this is cinematic classic stuff, the origins of the weariest tropes in the world.

Henry follows the villagers and their hounds to the rocky countryside, where he meets his lost, abandoned and forlorn creation at the Borgo Pass. (Well, nothing specifically marks it as being the "Borgo Pass," but we suppose, all things considered, that name is as good as any.)

The Monster absconds with his creator to a windmill. This is a nice, subtle metaphor, suggesting the Holy Cross, the power of an artificial construct moved by the natural (read: Godly) forces of creation and destruction. The central part of the mill inside is a sort of turning wooden gear or fulcrum, an artificial heart, something constructed that is inert—moved by the invisible force of the wind, the Breath of God, from beyond.

Also, Don Quixote "tilted at windmills," imagining vast ogres. The analogy being: Don Quixote was as involved in a "Quixotic endeavor" as much as Frankenstein, who felt he could supplant God by creating a man, and saw his entire world crumble around him because of it.

The enraged, murderous villagers surround the mill, setting fire to it. Fire: The element of destruction the Monster most fears, engulfs him—in rage and desperation, he tosses Henry Frankenstein's body over the side of the mill, to the earth below, as he screams in vengeful frustration, confined to his own fiery doom.

Although we do not see him, it is suggested Henry survives, and his curmudgeonly English Victorian caricature of a fez-wearing old gentleman father comes out, shares a toast with tittering servant girls, and declares health to the "House of Frankenstein." The end.

On the whole, an antique film, a message from another age; fueled, though, by similar concerns with our own mad, technological hell scape. The lynchpin here is the defiance of God, Nature... call it what you will. The artificial versus the very real force of power inherent in all our lives. Our attempts to probe beyond, to forestall our own, inevitable mortal ending, will ALWAYS end in fire and death, in the abandonment of our mad, Quixotic dream, to the rage of the multitude, and the fury of an inscrutable Providence.

It is the same message Mary Shelley was trying to convey in 1812. It is the message essentially conveyed by James Whale's brilliant, timeless film. It resonates, even more strongly perhaps, in the deadly, disastrous new century.

See all posts by Tom Baker →