A haunting and unsettling short story 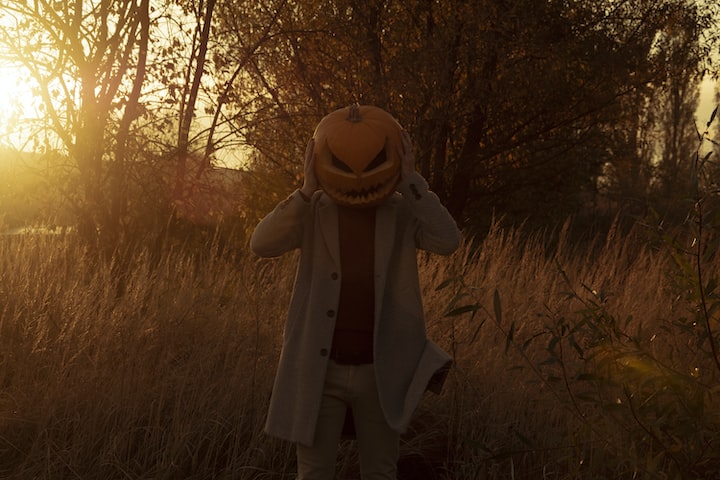 Photo by Ivan Serediuk on Unsplash

When I first read Joyce Carol Oates’ short story “Pumpkin Head,” I was so frightened that I didn’t want to be in my apartment alone afterward. Her stories have scared me before, but this experience was quite unsettling. As with most horror stories, the shock wore off with time, yet her characters continued to haunt me long after meeting them on the page. Perhaps it was her female protagonist — Hadley — whom I identified with so much that I could not forget her vulnerability as a woman living alone. As I sit here in my candle-lit apartment listening to the roll of distant thunder, I remember Oates’ story a decade later as we approach Halloween — the season of pumpkins and stories that make our skin crawl.

Oates’ story opens with Hadley, a recently widowed woman who lives alone. She is startled in front of her house by “a tall male scarecrow figure with a misshapen Halloween pumpkin for a head.” Although the initial image of this man, Anton, is frightening, the story reveals much more. Hadley and Anton have many layers the reader can peel back as the tension mounts. The further I read, the more engrossed I became with both characters, each an outsider in their own way. Although Anton eventually becomes a threat to Hadley, this story is about how she deals with her new life alone and the ghost of grief.

When I first read “Pumpkin Head” years ago, I was months away from my wedding. It scared me then, but not how it scares me today. As a woman recently divorced with no children, the isolation and uncertainty Hadley experiences is a part of life that is quite relatable and, at times, unsettling. Her encounter with Anton made me question: What happens to someone when their life abruptly changes? What is at stake letting someone unknown into our lives? How far will an individual with little power go to obtain a sense of control? These questions continue to circle my mind.

The History of the Jack-O-Lantern

Looking at Oates’ character Anton and the image of the pumpkin head made me think of the jack-o-lantern and its origin. According to history.com, the face of the jack-o-lantern derives from an Irish myth about a man named “Stingy Jack.” As the legend is told, Jack played a trick on the devil by inviting him to have a drink, then turned him into a coin to avoid paying. Aptly nicknamed “stingy,” Jack decided to keep the coin beside a silver cross so the devil couldn’t return. Later, he tricked the devil again into climbing up a tree and held him captive by carving the sign of the cross. His behavior upset the devil and God; therefore, he was never welcomed into heaven or hell. As a result, he roamed the earth with only a turnip to light his path. People began placing jack-o-lanterns in front of their homes to keep Stingy Jack and other evil spirits away.

There are some striking similarities between the Irish myth and the role reversal in Oates’ story that develops. In “Pumpkin Head,” Anton gives a jack-o-lantern to Hadley, later joining her for a drink. Like the devil, Hadley is deceived and finds herself in a situation that is not only hard to walk away from but quite dangerous. It is, of course, ironic that — a jack-o-lantern — believed to ward off evil is given to her by someone who represents it himself.

In the midst of all of this, I also thought of Hadley as a native-born resident. As an American woman, her character may hold some power and advantages in society that Anton, a European immigrant, desires. Looking back at the origins of the jack-o-lantern story, Jack seemed to be seeking some power which can be seen in Anton’s behavior too.

“Pumpkin Head” appeared in The New Yorker in 2009 and is also included in Oates’ book Sourland. If you’ve read her stories, you know they are quite dark and often violent. Take a look at “Where Are You Going? Where Have You Been?” and you might see some similarities here — one being a female protagonist isolated and victimized in her own home. They are two very different stories but do share some likenesses. Nevertheless, we read her work in anticipation that something very unpleasant and twisted will happen. This story delivers, and although it did leave me feeling quite uneasy, I would read it again. I have heard people say they didn’t like this story, particularly for its violence and the message they thought it communicated. It depends on how you read it, I suppose. But any piece of literature that elicits that much emotion — whether good or bad — is a powerful story.

In her writing, Oates communicates universal themes of loss, death, and vulnerability, which may be more frightening than some of the images we associate with Halloween. Hadley could be any woman struggling to accept the death of her husband and the strange, new life she has found herself in. Oates’ story is incredibly haunting, weaving traditions of folklore and terror with an ending that cannot be forgotten.

Hey there! Thanks for reading! If you enjoyed this story, please let me know by sending a like or comment below. You can also subscribe to read future stories. I’d love to hear your thoughts!

More stories from Jennifer M. Ward and writers in Horror and other communities.