You're in your thirties, you wish you could go back in time, and you need some cheering up.

by Lisa Angelini about a month ago in tv

If PEN15 taught you to reconcile with the past, then Palm Springs will remind you to enjoy each moment 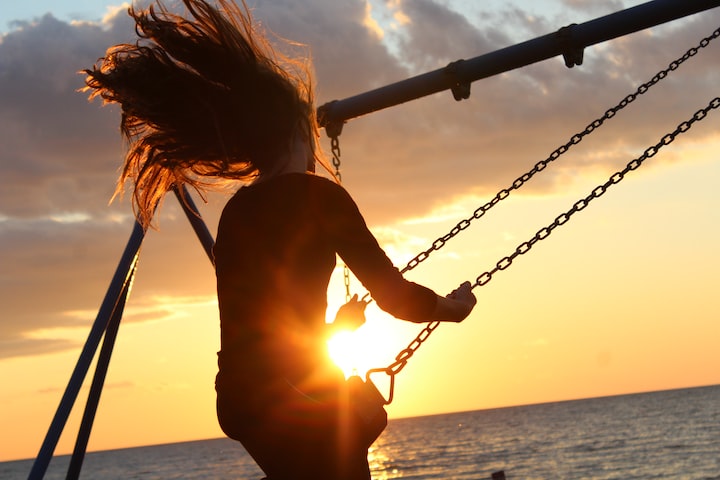 If you're anything like me, you tend to spiral down into the dark places of your mind once in a while. One negative thought entrains another, and before you realize it, you're making the list of everything that's wrong in your life and in the world at large without being able to stop yourself.

The wonderful thing about film and TV is that it has the power to jar us out of those melancholy moments, sometimes quicker and more efficiently than anything else could. Perhaps I'm only saying this because as an actor myself, I get VERY emotionally invested in whatever I'm watching, but I'm pretty sure it applies to mostly everyone, otherwise television entertainment wouldn't be such a huge pillar of our culture. Why is that? Because storytelling is at the heart of human life, and it takes countless forms; film and TV is only one of them. We love a good story, and there is something inherently comforting about being able to relate or empathize with fictional characters. Each one of us can cite at least one character that had a positive impact on our life at one point or another, whether it be a superhero, and antihero or even a villain. The experience of seeing ourselves and our experiences reflected is nothing short of cathartic.

Sometimes, I get stuck in a loop like a broken record on a turntable. Being a rather emotive and highly imaginative person, I have an incredible propensity for nostalgia. I can get nostalgic at any time of the day, just looking around and thinking, "this moment is going to be gone forever and I can never get it back." Since I turned 30 back in January, I've been having a bit of a hard time adjusting to society's expectations of women my age, and especially, to my own. I'm not quite where I thought—or hoped—I would be when I hit the "thriving thirties," and that feeling of failure is sadly amplified whenever I find myself scrolling mindlessly on the Instagram accounts of all the amazing women I admire. There is a dangerously fine line between feeling inspired by someone, and being painfully envious of their lifestyle or success.

One particular day, I was knee-deep in the murky waters of self-loathing.

I kept telling myself that I had wasted my twenties and that I would never get them back, that all was lost and that I would never, ever achieve everything I wanted in life, because it was just too late. I wished so badly for a time-traveling machine. I just wanted to be able to manipulate the continuum and go back to those lost moments, reliving the good ones at will and making different choices so I wouldn't have to suffer the consequences of the bad ones. That's probably why my interest was piqued when I saw a commercial promoting PEN15, a comedy show starring Anna Konkle and Maya Erskine. Two thirty-something actresses playing thirteen-year olds? Sounds weird. I love it already. Give it to me!

The premise is simple: "middle school as it really happened." PEN15 is not only hilarious, but also clever and in many ways, purgative. In a sea of teen shows released in the past two years—Sex Education, Euphoria and Atypical to name only a few—it stands out especially because of its leading duo and their mind-blowing chemistry, but also because it focuses on those ugly, awkward pre-teen years, often left behind in the TV world in favor of the "more exciting" second half of teenage years. While most teen shows feature characters between sixteen and nineteen years old, PEN15 opens with Anna and Maya, aged thirteen as they are about to start seventh grade. If you were a teenager in the early naughties, oh-my-God you are in for a treat! PEN15 explores all the themes you've always been too embarrassed to revisit: masturbating for the first time, crushing on some random person you've never met via AOL Instant Messager, feeling rejected because you're different... Indeed, the show may be ridiculously funny, but it doesn't shy away from portraying the angst attached to those eventful early teen years: bullying is a recurrent theme, as well as family drama, and... well, self-loathing.

I can't count the number of times where I thought: "OMG I remember this!" or "I've definitely experienced that" while watching the show. Somehow, by the magic of mirroring, it enabled me to reconnect with my inner middle-schooler—as weird as that may sound. In the days that followed my binge-watching the two seasons available on Hulu, I found myself feeling... freer. I was more truthful to my spontaneous reactions, bursting out laughing and being silly way more often than I normally would have.

See, because teens are half-way between childhood and adulthood, they are in touch with their emotions in a way that a lot of us aren't anymore, so when something makes them laugh or cry, it's very hard for them to hold back. They haven't yet learned to suppress their genuine reactions in order to seem more "mature." Their brain won't actually let them, as it is still mainly ruled by the amygdala, which is associated with impulses and instinctive behavior.

As adults, we take ourselves way.too.seriously.

As the years go by, responsibilities and pressure get in the way, and we cut ourselves off from this amazing ability that kids and teens have to find glee in the smallest things and respond to situations authentically. We start focusing too much on the end goal, and consider ourselves failures every time we miss a self-imposed deadline. This brings me to my next recommendation, which, if you loved PEN15 for the laughter and sense of freedom it gave you, you will surely enjoy as well.

Palm Springs is a comedy, as you can probably tell from the gif. I'm a sucker for those "stuck in a time loop" stories—most probably because of my time-traveling fantasy—even though I'll admit it's a bit of a tired concept. I'm always curious to find out if and how the time loop will end. In Palm Springs, Cristin Milioti plays Sarah, the rebellious, good-for-nothing daughter of the Wilder family. After following a mysterious guy called Nyles into a cave in the desert, she ends up reliving the same day over and over again. Only she, Nyles and another guy called Roy are stuck in the loop, and Sarah embarks on a series of attempts to get out of it, despite being warned by Nyles that it is simply impossible.

On top of being extremely entertaining, the movie is also a great reminder of something we keep forgetting: there is beauty in the passing of time, and wanting to stop it, rewind it or control it in any way is not only impossible—duh—but detrimental to our mental health. Yes, I'm saying this especially now that we've gone through the worst year of the last decade. Who hasn't wished they could go back to simpler times? (Whoever is virtually raising their hand right now is a liar!) In one of the scenes, Nyles visits Roy, played by the brilliant J.K Simmons. Roy is stuck in a rather pleasant day: the sun's shining and he's at home with his wife and kids, but it's a gilded cage. He'll never see his kids grow up. He'll never get to walk his daughter down the aisle. His life may be good, but it's stale. On Pause forever. We all know that anything that does not evolve, dies. It loses its meaning, as well as its purpose. The Universe is in constant expansion, which means that we are too. Think about it. What's so satisfying about movies, or stories in general? They have a beginning, a middle, and an end—unless we're talking about Lost in Translation—and they take us on a journey. So, that's when it hit me:

Life is a succession of moments between the beginning and the end.

I know what you're thinking:

Of course, I already knew that "it's about the journey, not the destination." Like you, I've heard it hundreds of times and read it on many a millennial's T-shirt. The fact is, I felt better after watching Palm Springs. It allowed me to step out of the dark tunnel I was trudging along and to see things from a broader perspective. I regarded my life with a fresh eye and saw a list of achievements instead of an endless to-do list. I was able to reconcile with the Gods of Time and acknowledge their almighty purpose, therefore letting go of my need for control. I'm not saying I'm "cured forever," because I doubt that any movie has the power to do that, but it's just what I needed to watch... at the right time.