by Q-ell Betton 10 months ago in review

I watch so as you may not have to.

Tyler Hanson (Taylor John Smith) is in love with Alison Hewitt (Halston Sage) a girl he has met after she moves to Los Angeles from San Francisco. Their relationship is going really well until they both go to an end of summer party. At the party, one of Alison’s exes from San Francisco, Chase (Rhys Wakefield), is also at the party. Chase tells Tyler what a party animal Alison was in San Francisco. Tyler drinks too much and meets Holly Viola (Bella Thorne) whilst going to the bathroom.

It turns out that they are both having a pretty bad night. Holly tells Tyler that she had been dumped, whilst he confesses that he is bummed over his girlfriend’s ex. A drunk Tyler confronts Alison and she ends up dumping him. Tyler leaves the party and goes out with Holly. They end up spending the weekend together, seemingly, bonding. Holly tells him that she is not from Los Angeles and that she moves around.

Tyler returns home and gets a text from Alison. He gets back together with her. The next day, when Tyler is back with Alison, he sees Holly at school. She comes into the same class as him. Tyler tries to tell her that he is back with Alison. Holly is initially cool, but when Tyler tries to tell her that he does not want to see her anymore, she freaks out.

Holly befriends Alison and her close friend, Lydia (Anna Akana). She also makes advances at Gil (Nash Grier), Tyler’s best friend. She gets closer to Alison, and even goes and stays over at her house. Tyler is, understandably, worried about Alison finding out. He meets her stepmother, Corinne (Brigid Brannagh), by chance at the school. He finds out she is not where she says she is from.

Lydia is suspicious of her as well and voices her concerns to Alison. The fact that Holly has no internet presence concerns her. Moments later she has an allergic reaction to a smoothie Holly gives her, putting her in the hospital. Holly’s relationship with Corinne is strained as her late father left everything to Corinne. Corinne tells her that she knows that she missed a couple of therapy sessions. Corinne is a little frightened of Holly.

Holly tells Alison she is pregnant and the father does not want to know. Holly finds out that Alison has never met Tyler’s family. She goes over to his house and meets his sister. Tyler is furious. Holly tells him that they should be together and they are in love. Tyler tells her to leave and never come back, pushing her to the ground. She goes to Alison’s house.

Tyler goes to see Lydia and tells her about his indiscretion with Holly. He tells her he is going to tell Alison. When he goes to tell her, the next day, Alison already knows and dumps him again. Holly believes, with Alison now out of the picture, they can be together. Tyler tries to ignore her.

Holly gets Tyler suspended for assault. Tyler tries to warn Alison that Holly is dangerous after he finds out her first name is Elizabeth and finds her online. He finds out that she has a history of mental problems. Holly kidnaps Alison and texts a picture of her prone body to Tyler. He races over to Holly's house.

Holly is expecting him and has Alison tied to a chair. When a car pulls up, Holly disappears. Corinne comes in and sees Alison tied up. As she tries to free her, Holly suffocates her. Tyler arrives at the house. Holly is waiting for him. She wants to replay their weekend. Tyler just wants to find Alison. Holly has her suspended above them. Tyler frees Alison, but Holly locks them in the house. They escape to the pool area. 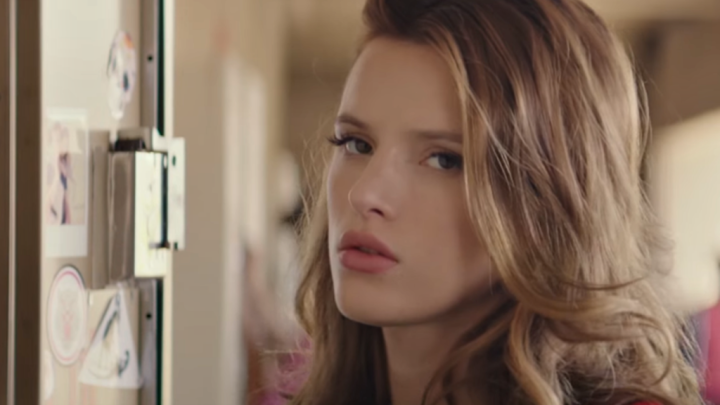 Don't I look sane to you?

Holly catches up with them and holds a gun on them. She cannot decide who to kill first. Gil, who had been called by Tyler earlier, comes in and distracts Holly. She shoots Tyler in the shoulder and then tries to shoot Gil and misses. Alison takes the opportunity of Gil’s entrance to stab Holly with a poker. She falls into the swimming pool. The police turn up and she is arrested. Tyler realises he got lucky. The end.

You Get Me, another Netflix film, is a teen version of Play Misty For Me or Fatal Attraction, a couple of classic films about deranged women getting obsessed with a man after a carnal encounter. Not likely to be recalled with the same respect as those two films, You Get Me is, nevertheless, not a terrible film.

The opening, with the dreaded voiceover, is not promising, with Taylor John Smith’s Tyler telling us what we are watching as we’re watching it. After that slightly awkward starting point, the film settles down nicely, quickly getting into the main story and introducing the scarily excellent Bella Thorne’s Holly. Her dark eyes and slight smirk hint at an underlying madness from the outset.

Though it is a relatively straightforward thriller, madwoman-on-the-rampage, by numbers film, the acting, and chemistry between the leads elevate the film to a watchable and enjoyable level.

The acting is good across the board in the film, but it is Bella Thorne’s performance that drives the film. She is dangerous and sexy, coy and crazy, friendly and psychotic. Thorne projects all of these emotions perfectly, never overselling, letting her eyes do most of the work.

Do you love me now?

Halston Sage as Alison has the most difficult role. Being the unknowing party, and then a victim is an unforgiving role. She is required to be nice and trusting, whilst not being so dull that you hope she gets killed. Sage manages to get the balance just right, making Alison likable without her being irritating.

The script by Ben Epstein is clever. It allows Tyler to be indiscreet with a license. The fact that Tyler, at an age of testosterone overload, is denied sex by Alison because she wants it to be real and then finds out she was a wild thing in San Francisco, is cute. That he succumbs so easily to Holly might be frowned upon by the overly prudish, but it works perfectly well within the framework of the film.

The film is well paced, with no unnecessary scenes shoehorned in for show. Directed by Brent Bonacorso, it looks impressive, with the camera allowing the story to be told by the actors rather than trying to impress with camera work.

Even though it is only given four point seven on IMDB, You Get Me is a far better film than the score would have you believe. By no means a classic, it is entertaining and good enough to take an easy 90 minutes out of your day for. A solid seven out of 10.