by Amy Branson 4 days ago in review

What is Toy Story 3 Really Trying to Say...? 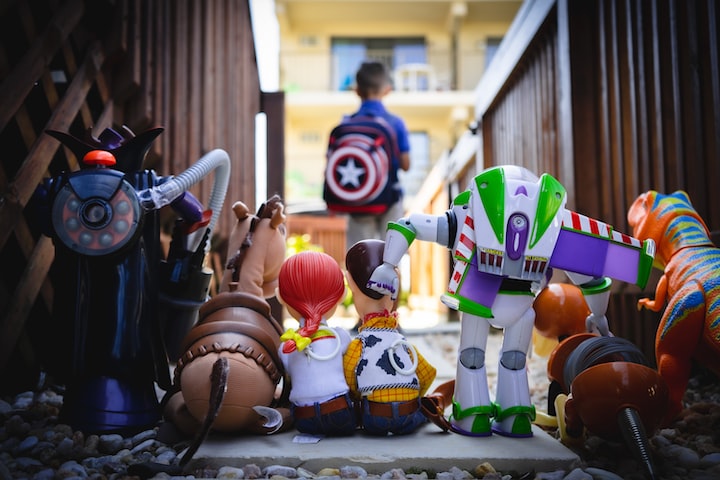 Photo by Chris Hardy on Unsplash

Toy Story 3 is a children’s movie with adult ideas by thematically portraying self-worth, inter-personal relationships, and ultimately the progression of life. In this article, I will discuss these ideas as they are portrayed in the film beginning with the toy’s desire for self-worth, how that translates to their inter-personal relationships and finally their response to the inevitable.

In the opening scene the toys are at the epitome of happiness. They are part of story that is derived from Andy’s imagination involving cowboys, runaway trains, aliens in sports cars, explosions and an evil flying pig dropping barrels of monkeys. In this scenario anything is possible. Each toy is being utilized to their fullest extent opening a window to how they value their self-worth, highlighting that the toys' self-worth is embedded in the imagination and entertainment of children. The joy of this scene is shattered by the darkness of the toy chest from which they are desperately trying regain the affection of a now grown Andy.

Andy has been “the boy” of the toys since he was very young and he is the one who gave them purpose for so many years. As Andy becomes a man he has little use for these toys and since he is now leaving for college his mother requests that he pack up the toys and store them in the attic or he donate them to a local daycare, Sunnyside. Andy responds to this with “Nobody will want those toys. They’re junk!” The toys, in wounded shock, realize that their worth has diminished to near nothing. This is the driving factor behind the toys sudden desire to find a new home at Sunnyside, the daycare Andy’s mother suggested.

Peter Bradshaw finds an interesting parallel in this story. He suggests that parents and adults are the toys, metaphorically speaking, and that one day children will grow out of us and things will never be the same. While this may stand true to a certain degree the fact remains that children will grow into adults themselves and, hopefully, will regain their desire to spend time with the adults they so fondly looked up to as children.

The toys measure their self-worth by how important they are to Andy and they all knew that the day would come when Andy grew up and he wouldn’t need them anymore. This fact doesn’t take away the pain that these deeply humanized toys feel. The relationship between Andy and the toys has become obsolete making the importance of the relationships between the toys themselves much more apparent. Something the toys say several times throughout the story is that they have to stick together, emphasizing that the toys have become a family. When they reach the daycare they are elated to find a group of young, wonderful children lovingly playing with the washed up toys already there. They find new hope that they will live out their years with worth and purpose once again. The “old” toys they encounter at Sunnyside, led by an old teddy bear named Lotso, greet them with kindness and acceptance and show them to their new room. Andy’s toys are so excited for the children to play with them! But when they finally do, the toys are thrown, bitten, crushed, painted, sat on; they are essentially destroyed by the wild spirit of the very young children of the room.

Once again, the joy and worth of these poor toys is immediately cut down to nothing. Needless to say, the “old” toys of the daycare knew that this would happen. In fact, they purposely placed "Andy’s" toys in the room they did to prevent themselves from meeting the same fate. After an escape effort by Andy’s toys they are caught and imprisoned by Lotso and his clan and it doesn’t take long at all for the toys to realize that they have stumbled into a hierarchy of sorts. One of Andy’s favorite toys, Woody, escapes in an effort to find Andy once again and along the way he comes across the home of a sweet little girl named Bonnie who loves her toys and takes wonderful care of them. The toys which Woody encounters there are quite the opposite as those running Sunnyside. Ironically, the evil toys which run Sunnyside are all dilapidated, with the exception of the Ken doll who symbolizes the same evil only with a pretty face.

The fact is, the toys at Sunnyside share the common factor of being thrown out by those who don’t want them anymore; they are outcasts. They are vengeful, mean and unwanted and not only are these things apparent in their actions but also in their appearance. Lotso is tattered and walks with a limp while many of the others are scuffed and have pieces missing. There is even a shabby baby doll that is missing an eye and adds an element of creepy horror to the story. On the contrary, the toys which Woody encounters during his escape are greatly loved by their little girl and are accordingly loving in return. They are all kind and well taken care of and they are all in great physical shape. The condition of all of these toys directly relate to and are a symbol of their internal selves and the roles they play in the story. The evil toys are falling apart on the inside and outside while the nice toys are flourishing inside while clean and put together on the outside, accentuating the symbolism.

The ideas of everlasting life and the progression of life also seem to be underlying themes in Toy Story 3. It begins in early scenes of the film when the toys decide to voluntarily move on to Sunnyside, virtually rendering it a retirement home. They decide that it is not yet time for their end so they find a way to continue on. After being imprisoned at Sunnyside and escaping together, they overcome several hurdles only to find themselves at the dump where they meet their potential end, being burnt in the dumps incinerator. They toys finally succumb to the fact that they are all about to die when they are suddenly rescued by their little green alien friends who pull them all up with a giant claw. The irony here is that earlier on in the trilogy it is expressed that these aliens from “Pizza Planet” worship the claw form and see it as their leader. Therefore, the toys are rescued from a dismal fate by the “god” of the aliens. This adds to the mystical nature of the story and the idea of infinite life.

This story ends with the toys finding their way back to Andy who, by the unseen suggestion of Woody, gives all of his toys to Bonnie, the loving little girl who Woody encountered earlier on in the film. The audience watches as Andy and Bonnie play with the now fulfilled toys and we see the implication of Andy saying good-bye not only to his toys, but to his childhood. Here we also see the story of Toy Story come full circle. The new home with Bonnie is wonderful, but it too will end, just as it did with Andy. Bonnie will grow up and have no need for the toys anymore and if they are lucky they will go on to another loving child, thus giving way to the idea of infinite life. The Toy Story trilogy ends where it begins: with the toys being part of the imagination of a loving child.

This children’s story, as seen through adult eyes, is one which sends many deep and important life lessons. Some may argue that these are life lessons which are too morbid and complicated for a child to experience or even understand. In fact, they are complicated and somewhat morbid. However, growing up; understanding the importance of self-worth and personal relationships; and accepting death as a part of life are all very relevant lessons for children and adults alike. Perhaps the reason which these seem so morbid is because some of us have not yet accepted death as a part of life nor let go of childhood. Or, on the other hand completely, some of us have let go of childhood too much and completely forgotten the careless freedom with which children are filled with. There is also the possibility that some of us have been able to let go of childhood and have accepted the inevitability of death, and understanding this is part of understanding the heartbreak and beauty of life.

The themes presented in Toy Story 3 are themes which all human beings can carry into their own lives. It’s about finding that delicate balance between not accepting these things enough and accepting them too much. It doesn’t seem like such a farfetched idea that we all want to have infinite life. In one way or another, people often do want to live forever whether it is in heaven or through the memories of their loved ones. As Buzz Lightyear says, “To infinity and beyond!”

A few passions of mine:

-Hanging with my kids, our dog, and my bestie(aka, the love of my life)

-Playing my guitar(I'm still a newbie!)