Loved WandaVision? Then You'll Get Hooked On The Umbrella Academy.

by Amber Fierce about a month ago in tv 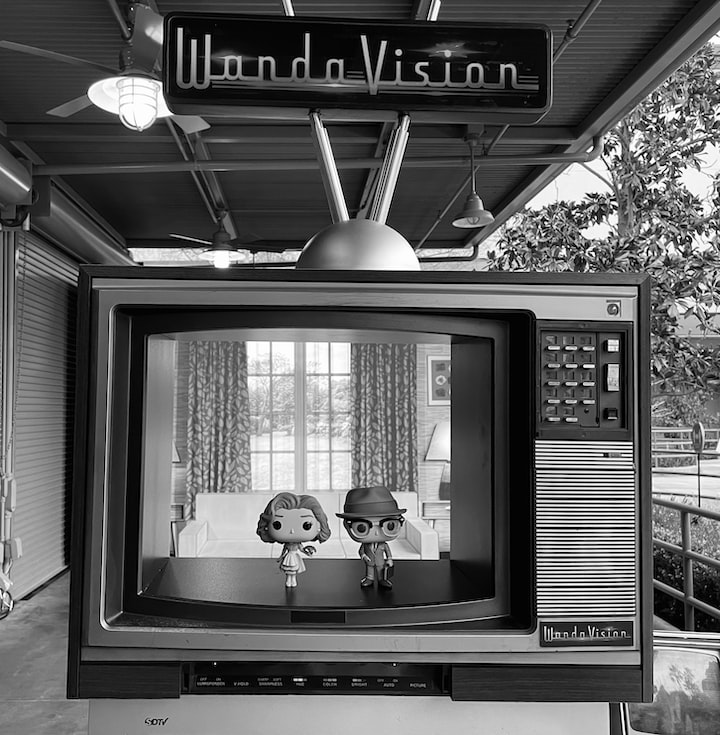 Photo by Ashlee Brown on Unsplash

WARNING: This article may contain spoilers.

Wanda Vision is a lovable MCU series set up as multiple sitcoms. The Umbrella Academy is a eye catching original Netflix series. Both series are classified as dark comedy, drama, science fiction, superhero, fantasies. These shows have their differences making them their own stories. Their similarities are why I recommend watching both. Two of their biggest parallels are coming to terms with their pasts, and unfathomable power.

Elizabeth Olsen is an incredible actress and is doing amazing things with the character Wanda Maximoff. The character doesn't yet know that she is The Scarlett Witch. (I don't know about anyone else, but I thought she knew that, when she was first introduced in Age Of Ultron).

Wanda states in the series that all she could feel before "this" happened was complete nothingness. The character as we've known her, has only experienced intense love and loss in her life. Her parents were killed by one of Tony Starks missiles in Age of Ultron.

Then Wanda and Pietro Maximoff her twin brother joined Ultron thinking they were on the good side. They then became avengers at the end of the movie.

That being said Pietro got shot multiple times trying to save Hawk Eye and a little boy. Pietro was successful in saving them but could not save himself. When that happened, Wanda had a surge of Chaos magic pulse from her body, destroying Ultron's minions that were flying around her. (It's a twin thing).

We don't see a lot of Wanda's and Vision's relationship. They met in Age Of Ultron, and we can see the kindling starting to light in Civil War. Then they were just together in Infinity war. Fans of the ship, didn't get any ground leading up to their official unity. (Unless that was just me).

Anyway... Most of us know what happened in Infinity war. Vision asks Wanda to remove the mind stone from his head and in doing so it would end up killing him. She obliged. Not without a bit of push back but eventually she agreed to removing the mind stone herself. Then there was an emotional moment between the two and Vision said before dying "I love you." (I'm not crying, you're crying).

Unfortunately Thanos got the time stone and turned back time, removing the stone from Visions head himself. Killing Vision for a second time in front of Wanda.

Wanda lost her parents, her twin brother, and the love of her life.

After she was snapped back to life, she went to find vision wanting to give him a proper funeral. (As a synthetic being, he is not viewed as a person though). In an attempt to get closure, Wanda states that Vision deserves a funeral. That she deserved it.

Wanda was shown Vision in pieces. She went to feel him like she had in Infinity War when he thought the stone was speaking to him. However she couldn't feel him anymore.

Wanda found a note in her car and she drove to the spot where her and vision were going to build a house to live the rest of their lives in. The note read "with love, V." With a sketch of a heart underneath.

Once Wanda got to the coordinates that she was given, all she found was the beginning foundation of a house. Upon seeing this, she buckled over, and it's clear that she could only feel pain and sadness in that moment. Then a surge of intense chaos magic exploded from her body. When this happened she recreated Vision and trapped Westview and it's residents inside a hexagonal dome. Many theorists claim that this happened because she couldn't accept that Vision is dead.

While she recreated Vision she also has twin boys in the world she created. One had telepathic powers, and the other got super speed like her brother. At the end of the series she has to say goodbye to them as well, and says to them, "boys... Thanks for choosing me to be your mom."

Vision during the series asks her what he is, and Wanda finally has an answer for him at the end of the series. When she has to say goodbye to him for the third time, she affectionately says, "you are my sadness, and my hope. But mostly you are my love."

That's why there are so many fans of the show though. Wanda Vision tugs at everyone's heart strings. The Umbrella Academy does the same, but a bit differently.

In The Umbrella Academy, the main characters are adopted siblings. There are seven. The adoptive father named them numbers. The children gave themselves real names.

Each of the children have special abilities. Luther has super strength. Allison can say "I heard a rumor" and make a person do what ever she wants. Diego can control knives when he throws them. Klaus can conjure the dead and have them fight for him. Five can jump through space and time. Ben has tentacles that come out of his back and rip things apart. Vanya can use sound waves to destroy/move things. (She knew that, but doesn't know that anymore. Don't worry I'll bring that back up).

In the beginning of the series you learn that their adoptive father Reginald Hargreeves is a hard ass. He puts the children through intense training to get their powers under control. Saying that they are the future, and that they are going to save the world.

In the series, the children grow apart. Luther lives on the moon, Klaus is in rehab, Vanya thinks that she's ordinary, Allison is a movie star, Diego is still trying to be a hero, Ben is dead, and Five ends up in the future where the world is destroyed.

All of them then come back together for their fathers funeral. Luther thinks that their synthetic mother killed their father. Their mom has built in programming to save and or protect someone from immediate danger but it was disabled.

(I know there is already a lot going on here. I'm just trying to summarize things so I can actually reach my point without boring anyone! Stay with me!)

The now Adults of The Umbrella Academy have to come to terms with their pasts, their future and how their father treated them.

Number One, Luther, stayed loyal to his father for one final mission and it ended in tragedy. Luther almost died but Reginald gave him a serum that turned him half ape. After becoming like this, Reginald sent Luther to the moon. Reginald told him he needed him to send back his findings. You learn that Luther's father didn't care about his research at all.

Number Two, Allison, there isn't a lot about the way Reginald treated her. However, she's used her powers to get most of the things she's wanted in life. She has also regretfully used the rumor power on her daughter to try and calm her down, and kept making excuses about why she was using it on her daughter.

Number Three, Diego, had a really hard time learning how to talk when he was a child. His synthetic mother helped him learn how to pronounce words. He felt loved by her and loved her as his mom. Thus he doesn't want to admit that she has to be shut down.

Number Four, Klaus, had been locked inside a dark shed in a cemetery. Reginald was trying to desensitize him from the ghosts he was able to see. Klaus also has not been able to accept Bens death since he passed away. So, Ben is always there in the background attached to Klaus.

Number Five, cannot accept that the world ended and his family was dead. He broke a contract he had agreed to, in order to warn his family about their impending doom. He tried getting them to help him prevent it from happening.

Number Six, Ben, is dead but also could not come to terms with his own death.

Number Seven, Vanya. She thinks she is ordinary and has never been able to accept that, because of how amazing she thinks her siblings are. She learns that she actually does have a crazy awesome power, but now can't accept that she has one. Reginald tried helping her control it. He was failing, so he kept her in a fail safe where sound couldn't reach her. Then he got Allison to use her rumor power on Vanya saying "I heard a rumor, you think you're just ordinary."

All of these characters were brought back together because their father died, the end of the world is coming, and possibly having to shut down their mom.

In the end ( not the real end). Diego was the one who shut down their mom. Finding her in a glitching state. Diego chose to shut her down without consulting his brothers and sisters like they had agreed to do before any action was taken. In this moment you can see the grief in Diego's face when he is faced with this decision.

Luther finds all of his research he sent from the moon under floor boards of the mansion they lived in. Luther was incredibly hurt.

Klaus tried to conjure his father but failed each time he tried.

Vanya was in denial of the power she has saying that she is just ordinary but her emotions are part of how the power works. After Vanya hurt Allison, her family locked her back down stairs in the same bunker that Reginald did. Vanya then split into two personalities. One making her angry and vengeful, and the other trying to reason that they were going to let her out.

Ben, saves Vanya, and in doing so he can no longer stay away from the light that had always been there waiting for him. Ben possessed Vanya and found her hiding n her "mind palace" which happened to ne a violin. He told Vanya, she was allowed to be angry, and hurt. If any of them were treated like she was they would've felt the same. He asks Vanya to hug his as he goes.

Both Wanda Vision and The Umbrella Academy bring fourth uncomfortable topics surrounding losing loved ones. Helping those around you who are in uncomfortable situations (including if you've cause them). And discipline over ones powers. The greatest parallels when it comes to power is Wanda controlling everyone in Westview, as Allison controls people with her rumor power. And Wanda officially becoming The Scarlett Witch as Vanya unlocking her power to its greatest level.

I of course, have not said everything that happens in this article. If I had there would be no point in watching the shows.

I hope you enjoy them!

I am a Canadian writer. I didn't know what kind of stories I wanted to create until I found a story that was serious but lighthearted, funny, and silly. Those are the kind of stories I am going to bring into fruition. Happy reading!

See all posts by Amber Fierce →