I Didn't Like 'The Umbrella Academy' - Yes, I Said It.

by Thaddeus Howze 5 months ago in tv

Yes, it got a second season. But I won't be there.

There are thousands of articles out there singing the praises of The Umbrella Academy, an award-winning comic and superhero science fiction series, which appeared on Netflix in 2019. The television series was based on a Dark Horse comic, which first appeared in 2007 and won an Eisner Award (the Academy Award of comics) in 2008 for Best Finite Series/Limited Series.

I have not read the comics. I won't cast judgement upon them. YET.

But this article isn't going to be one of those glowing love-fests you can find anywhere on the internet. I did not like this series, and the reasons were things I just thought, as a writer, we didn't do anymore. I am a lover of the superhero genre and when you can get on my bad side, you are doing something seriously wrong.

In an effort to not spoil too much, I have left out a lot of details, but I suspect if you are a woman or person of color who watched this series, and found yourself wincing, you will understand what I am talking about. Watch it again with this in your mind, and you will see the series differently.

The story was of a superhero team without any of the filial bonding, or responsible interaction one would expect from heroes who risked their lives to save each on a regular basis. They hadn't just met each other either. They had been doing this since they were kids.

There were so many missed opportunities. Yes, I know they are working from an already existing comic series, but it is my firm belief not every comic translates into different media successfully. The Umbrella Academy might have been a winner on the page, but the televised series kept missing the mark.

I was annoyed with the undertone of the series because the characters of color (or any role having any degree of diversity) were relegated to secondary roles. They got less screen time, they never seemed as prominent and often acted as little more than props on the screen.

This sets up a host of expectations for me as a long-term viewer of science fiction on American television. If I had been playing "negative expectation" bingo, I would have certainly scored.

Once you establish all this, you realize the day will be predictably saved at the last moment, by a White man with a plan. And it was. But it wasn't. Which is the only thing which redeems this story.

The most problematic nature of this series is no one noticed how the minority characters were treated. They were denied good or positive story options, they were denied the option to be seen as good parents, they didn't even get to consider having natural hair that wasn't dyed unattractively blonde. Yes, I said it. I hated Emmy Raver-Lampman's hair.

THE GOOD, THE BAD AND THE UGLY

The Good: The cinematography is lovely. The special effects sumptuous, well integrated, and quite effective. I enjoy almost every scene, even while I raged at the things I hated in them.

The Bad: This series has very predictable moments. So predictable, I found myself able to count down from five as the latest problem presented itself. Worse, it almost always revolved around the constant infighting of the family members.

Whenever a critical plot point presents itself, they would break down and argue, thus perpetuating whatever the problem being presented past a point of good sense.

The Ugly: I have not read the comic. I will, when I stop being annoyed, just to see how much of what I am seeing is a product of adaptation or of television production.

I have been told that in the original work, all the characters were White and in this screen adaptation, minorities were folded into the story. With that said, there were a few things which annoyed me more than anything:

Spoiler-Lite: If you feel I am being intentionally vague, it's because if you haven't seen it, you probably will before Season Two starts, and I don't want to spoil too much for you. But when you watch it again or for the first time, imagine you are a person of color, or a woman, and ask yourself, why so much of the series problems seems to revolve around failed minority cast members making poor or questionable decisions? What kind of messages were they sending at the subliminal level?

Could it have been better, more inclusive, more well rounded as a series? Yes. If it had, I would have loved it the way I did DC's streaming service's tribute to off-beat, left-of-center superheroes, The Doom Patrol (2019), which also came out this year and was better in every way, except their strange attraction and overuse of the word, FUCK. I guess every series has their one thing. 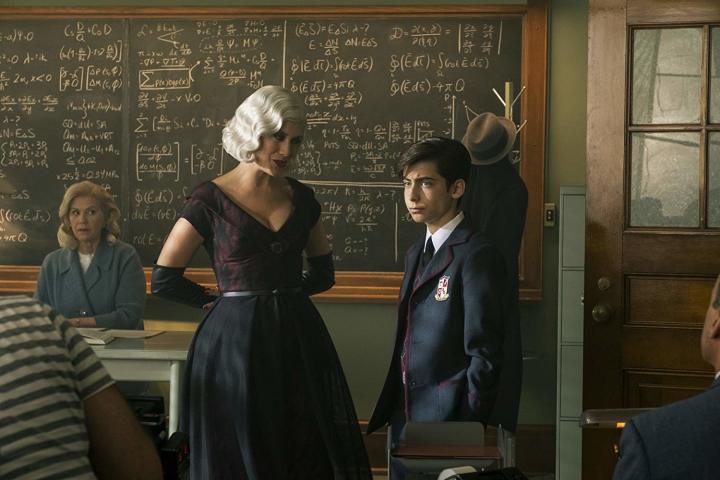 Kate Walsh and Aidan Gallagher in The Umbrella Academy (2019)

The Umbrella Academy gets two ratings from me: One for its overall production value, and the second for its knowing or unknowing cultural bias in light of a world where we should know better by now. Maybe next season it will get better, but I won't find out on the front lines. I will let my friends take the bullet this time.

7.5 - Overall: The show's production values were clean, the special effects were effective and the series cinematography was spot on, with the pacing being my only complaint in terms of production.

4.0 - Cultural Blindness: Minority characters had lesser roles, flawed depictions, and were under-developed during the series run in comparison to the White Characters who appeared to have better stories, better powers and more agency, narratively speaking.

Thaddeus Howze is a prolific writer of speculative fiction in Hayward, CA. His work has appeared in a host of anthologies and journals. He has two books, 'Hayward's Reach' (2011) and 'Broken Glass' (2013).

See all posts by Thaddeus Howze →