How dystopian YA shaped Gen Z

by Vanessa Lewis 20 days ago in pop culture

From The Hunger Games to real-life atrocities, Generation Z would not be what it is without the dystopian YA genre. 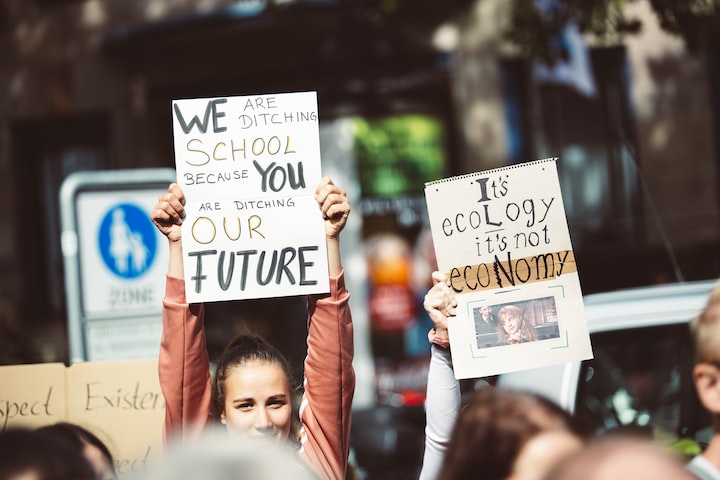 From roughly 2010-2014, dystopian YA was all the rage. Rising political tensions, war and a recession from the previous decade had curdled into the rise of the dystopian genre: where horrifyingly oppressive governments committed grave atrocities against the people they were supposed to protect, leaving it to teenagers (who were usually cisgender, white and heterosexual) to save the world.

I was 11 when I first read The Hunger Games. My horror and anger at the oppressive structure of Panem and the titular Games were echoed among all those who read the books and watched the movies, as was my relief when the insurgent main characters prevailed at taking the Capitol down. I went through the same thing with the Divergent series, The Maze Runner, Matched, Uglies, Legend...I devoured the same narrative over and over again: that in an unjust world, youth stood up to fight for justice and peace. And it stuck with me.

For most people who read those books, the idea that these scenarios could ever unfold seemed unrealistic. Impossible. After all, how could a world as civilized as ours ever turn into a dystopian hellscape?

But in my eyes, and in the eyes of my generation, we have seen this happen. Generation Z encompasses those who were born between 1997-2012, and we grew up in a world post-9/11, where division and fear were increasing at alarming rates. Where climate change loomed over the horizon, threatening to destroy the fabric of our world. Where the adults in charge, who were supposed to protect us, largely did nothing.

Of course, Gen Z isn't unique in rebelling against its predecessors; nearly every generation has battled with its parents. But what is highlighted in Gen Z is the fight for justice in an increasingly unjust world, just as we witnessed in the dystopian novels we consumed in our formative years. Generation Z has observed numerous unconscious similarities between these narratives and the injustices present in our world, and we consider ourselves to be the main characters who must fight to end them.

1. The Big, Bad Adults who create complicated problems in our society.

Climate change. Mass shootings. Socioeconomic disparities. Racism, sexism, homophobia, transphobia (and all other forms of discrimination). I could go on and on in listing all the problems in our society. Of course, none of them can be directly tied to a singular person to be held responsible, as is often done in dystopian YA novels (see Presidents Snow & Coin, Jeanine Matthews, etc.) but they are present in our society due to the apathy of the Adults In Charge.

Gen Z knows this. Social and societal change don't come easy. That's why we've taken the fight to mitigate (and hopefully end) these issues through many means, such as speaking out, political action, spreading information, and most notably, using the Internet, particularly social media.

And it's been working. Through leaders such as Greta Thunberg, Autumn Peletier, Emma Gonzalez, David Hogg, and many more, Generation Z has made waves in the world. The Adults In Charge are listening, and are grudgingly being forced to make positive change happen.

2. We want the world to become more accepting and fair to everyone.

Again, this isn’t a sentiment that’s unique to Gen Z. People across all generations want the world to become a more accepting place.

However, Gen Z is notably one of the most passionate and diverse generations out there. We are a mix of genders, ethnicities, sexualities, and many other things that make us unique and shape us as people. It’s the recognition and celebration of our differences that make Gen Z such an accepting and radical generation. Because in our eyes, people shouldn’t be divided because of how the world sees them. If that’s the case (and it is) then it’s the world that needs to change.

3. We are willing to actually fight for change.

In dystopian YA, there’s usually some sort of physical fight scene where the main character literally fights the oppressive government, or the main adult villain.

Real life is a bit more complicated than that. Though there are many pervasive issues in our society that we’d like to fix, there’s no way to fix them in a singular physical fight. Systemic and societal issues are fueled by passivity and performative action. They are large, looming, and have deep roots in our society. And unfortunately, most of Generation Z is young and inexperienced; our oldest members are only 24. Many of us still have some growing up to do – but that doesn’t mean we’re going to stand idly by while the Adults In Charge continue to divide and hurt people.

Having grown up in a world connected by the internet, Gen Z possesses a unique weapon: the power of social media. At recent rallies for former US-President Trump, Gen Z quietly plotted to reserve tickets to the event in masses, leading to empty stadiums and a fraction of the expected attendees filling the stands. Public figures who spew hateful rhetoric get ‘cancelled’ and trolled on Twitter and TikTok, including politicians and celebrities. And most notably, Gen Z uses the internet to spread awareness about the issues that matter to them, with social media platforms being utilized not just for leisure, but to spread information.

Of course, Gen Z isn’t perfect. Neither is dystopian YA. The world isn’t divided into Big, Bad, Adults and spunky teenaged main characters, despite what some members of Gen Z might think. But that doesn’t mean that we can’t take inspiration from these stories.

After all, dystopian YA is set in future, but modelled on our current society (if certain issues were to prevail). And for all of our sakes, Gen Z is set on making sure that those dystopian futures never come true.

I'm 20, Canadian, and I have a lot of thoughts. I write about pop culture, books, TV shows, and what I think about the world.

See all posts by Vanessa Lewis →