When the first day of filming is halted amidst the latest threat, the cast makes a list of their potential enemies and sets their eyes on a former co-star who may be holding a vendetta against them. Jason's insensitivity while directing causes the ladies to become frustrated and Tori stresses over an upcoming sex scene with Brian. Meanwhile, both Gabby and Brian share some personal news with the cast.

The previous episode ended with the set on fire. With the set being set on fire, the original Beverly Hills 90210 cast really does have a stalker. Consequently, because the cast has an active threat against it, Christine Elise is finding it difficult to find a company prepared to cover the insurance the production.

The Peach Pit is the only part of the set that didn't burn in the fire. Were there any other areas of the set? So far, we only saw the Peach Pit. 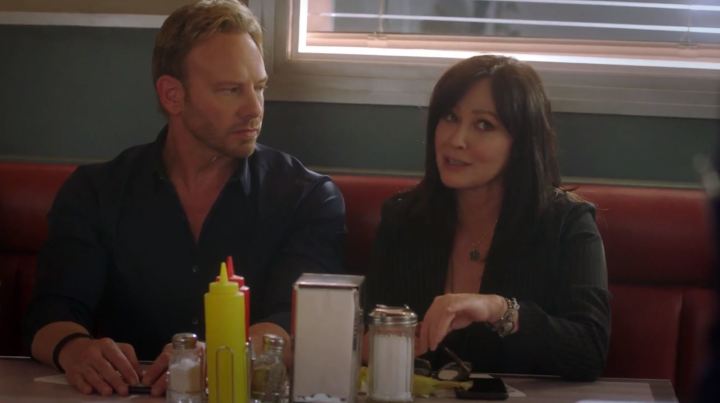 The gang lists off numerous people that might have a beef with the Beverly Hills 90210 cast. After accidentally falling down a flight of stairs, Tori Spelling begins to think Jamie Walters is the stalker because of the graffiti on the studio door.

It's funny how Shannen doesn't remember Jamie or his character. It was the sixth season. Was Shannen in the sixth season? While I hardly ever watched Beverly Hills 90210, I am seriously hooked on BH90210. I was never really into the original series because I didn't find the characters relatable. This isn't the case with BH90210. I very much relate to the fictionalised characters each of the cast members play in this quasi-reboot. It has a modicum of comedy mixed in with a hearty helping of drama. It's a fun romp, there is no doubt.

Did you see how Jennie Garth is pretending to like golf just so she can be with Wyatt Jackson (Brendan Penny)? Jennie doesn't like golf because it reminds her of her ex-husband.

As the cast investigates, the real investigators uncover the true stalker. Do you remember the dress Tori stole in the series premiere? The stalker was apparently the p*ssed off dress owner. 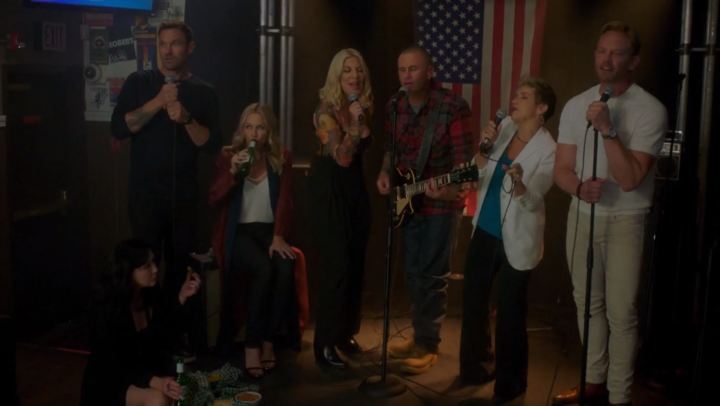 To make it up to Jamie for blaming him for everything that's happened, the cast agrees to sing with him on stage. It was a fun scene with the cast on stage singing. Despite how fun it was, it doesn't look like the audience was all that impressed with the gang's vocal talents.

Wyatt, for anyone that hasn't been paying attention to the series, is Jennie's bodyguard. She's apparently the only actor on the reboot that has taken advantage of the studio's offer of having extra security. Jennie was all over Wyatt like horseradish on a beef cold cut sandwich.

Jason Priestley reschedules the sex scene first thing the next morning, but Tori isn't completely happy. When the scene is finally shot, it gets a little too hot for Brian because he apparently gets a woody. Even though we don't see any sign of it, the intimation is crystal clear. Tori slips back into her character like it was only yesterday. She plays 'Donna voice' perfectly. Could this be the reason Brian got a stiffy?

The sudden revolution Brian has a son he didn't know about must be jarring for him. Zach (Ty Wood) only applied to be Brian's assistant because he wanted to get close to his father. Naturally, because Brian now knows Zach is his son, it feels uncomfortable for the actor to have him as his assistant. Brian pulls strings at the studio to get Zach hired as a personal assistant on the show.

Brian has a great connection with Shannen. This is obvious because of the way he converses with her about personal issues he wouldn't dare broach with any of the other cast members. 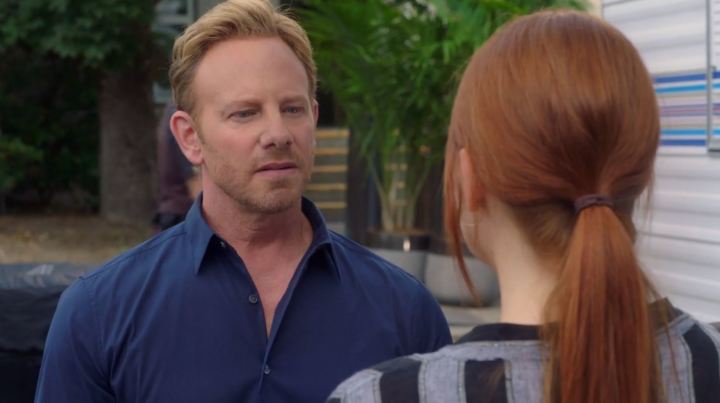 Screen Capture: Ian Ziering as a fictionalised version of himself in the Beverly Hills 90210 quasi-reboot miniseries BH90210. Facing away from the camera, playing Anna, is Natalie Sharp.

Ian Ziering's interest in Anna (Natalie Sharp) is really apparent to anyone with a pulse. They seem to be playing up the generation gap a lot because, when Anna uses the phrase "Netflix and Chill," Ian doesn't seem to know what the head writer is talking about.

Christine is really into being with Gabrielle Carteris. Because it's the age of MeToo Movement, Christine is nervous about getting sexually involved with someone that works for her. Christine wants Gabby to sign a consent form for a sexual relationship, but the actor isn't sure she can do that yet.

Later, because of a developing sexual relationship, Anna wants Ian to sign a consent form. It's the same form that Christine wanted Gabby to sign early in the episode.

Signing a consent form is a thing, Gabby confirmed to the rest of the cast. People must get with the times. Gabby comes out as being undeclared. This bravery inspires Brian to introduce to the entire cast Zach as his son.

The first scene of the reboot is in the can. Only another 46 scenes to go and they will have an episode wrapped. 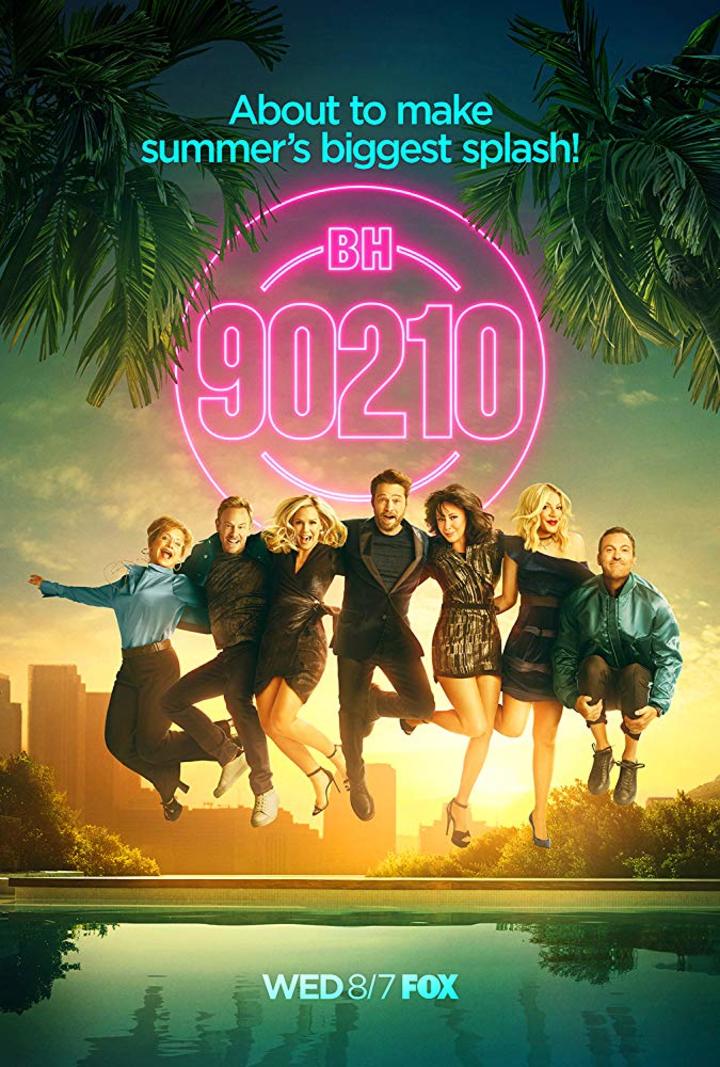 Next up is the season finale. What are your thoughts on the series thus far? Do you think there should be a second season? Even if fans want a second season, there is no guarantee Fox will order one.