by Q-ell Betton 11 months ago in review

I watch them, so you don't have to. You're welcome.

It was calling me; when a film registers two point four on IMDB, it is begging to be reviewed. Begging I tell ya! The opening credits, which looked like they were knocked up on a budget PC, are woeful. They are, mercifully, short. Unfortunately, the film begins. Whoa, it’s terrible. I am writing this as I watch the film and it’s painful.

Make no mistake, I am doing you a service by telling you–no–warning you, not to watch this film. This film is a car wreck. Netflix obviously does not watch everything they output. The script is woeful, the acting–ha!–is nonexistent, the story bollocks, camera work is… in focus?

Chris is leading the mission, though it is his brother Mike who has always been the leader. We are shown, in an opening sequence, that in an earlier mission to rescue a world leader, Mike’s decision gets the leader killed. That becomes an issue when running the present mission.

When they get to the research facility, they find it completely vacant except for one lone survivor, Isabella (Larissa Andrade), a scientist who survived a blast that incinerated everybody else on the base.

There is an alien artifact in the base that caused the annihilation of everyone on the base when attacked. This information is relayed to the Seals by Isabella. Aliens attack the base. Mike works out, because he is obviously a genius, that the aliens want to invade earth. 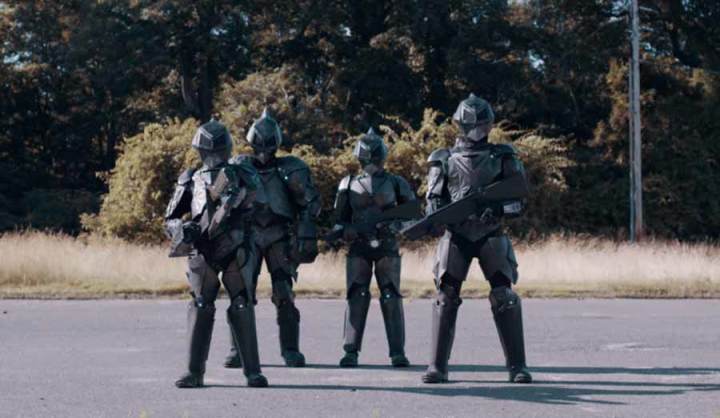 "No one will know we were here, thank god!"

In every encounter with the aliens, the guns prove no use whatsoever. These Seals, knuckleheads that they are, unload unholy amounts of ammo at them whenever they encounter them.

Of course, it is a complete waste of time. They find out, by accident, that the aliens are affected by electrical signals, and hatch a plan to lure them all into one place to kill them.

When that plan goes awry and one of the team, Chris, is taken, Jonesy, who had been taken by one of the aliens earlier, and saw their home planet–yes he did–tells them about a spiral pattern.

Photographers and mathematicians will understand, for the rest of us it’s like "what?" Isabella and Thorpe, who both have a love of language and communication, work out how to open the artifact.

The aliens, it turns out, are not trying to invade the planet, but trying to retrieve one of their own, who happens to be inside of the artifact that is in the research base.

Mike, now leading the team and desperate to get his brother back, confronts the aliens with their brethren. Initially, he threatens to kill the being unless he gets his brother back. He quickly relents, and they swap his brother for the alien.

The groups acknowledge a peaceful truce and the aliens beam up to their spaceship and fly off. Chris and Mike wonder what they are going to tell the top brass. The end.

Guns and science are a thing...

Oh god, Jesus wept, my eyes! This film is staggeringly awful. In times past, when there was such a thing as shame and fame, or notoriety at any cost was not craved, a right-minded person on watching this wretched mess, would replace their name in credits with Alan Smithee, directors would anyway, a pseudonym used to avow credit of particularly bad work. What a writer would do is anybody’s guess.

All concerned with this project should have adopted a pseudonym. The directing–step forward Jeremiah Jones–is atrocious, the writing–Ben Bailey, Dave Baker, and Nathan Zoebl–is the kind of thing a fourteen-year-old sci-fi geek might come up with, and he would still get a ‘D’ minus.

The film is ninety minutes long and feels like it lasted five hours. You could not get high enough to enjoy this film. I am almost angry reviewing it; it’s so terrible. There must be a fund that Netflix has that's just giving away money for people to create content, that could be the only reason they did not pass on this film.

This is, hands down, the worst film I have watched on Netflix. I’m confident that I will not see a worse film this year. I may see a more disappointing film, but I will not see a more inept, badly executed, miserable excuse for a film than Alien Warfare in the rest of 2019. Avoid; you have been warned.