by AJ Birt 2 months ago in movie
Report Story

There's so many adventures the little wooden boy has been on... 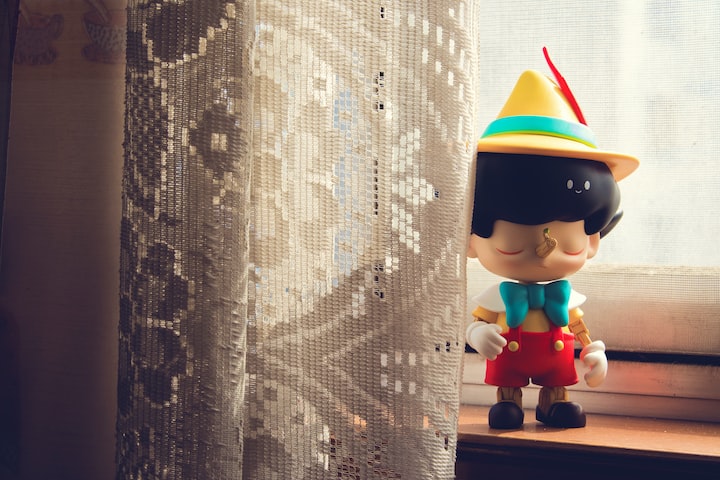 Photo by Milk Chan on Unsplash

2022 has seen two unusual reimaginings of the classic children’s tale. Disney has tried its hand again, whilst Netflix has produced a stop-motion creation (more on that later). However, not one rendition of Pinocchio stays true to the 1883 novel. Here is a compilation and comparison of all the bizarre different ways that Pinocchio has been warped over the past century.

We’re starting off strong with a horror-fuelled adaptation of the classic childrens’ fairytale. Lies of P is an upcoming videogame in which the main character must choose lies and navigate the world. Featuring visuals similar to Bloodborne, one cannot help but wonder what the innocent wooden boy is being put through.

When asked how such a game was inspired by Pinocchio, director Choi Ji-Won cited inspiration from the original story of Pinocchio - no, not the Disney film. The original tale of Pinocchio, The Adventures of Pinocchio by Carlo Collodi is a lot darker, and so the developers leaned into the gruesome nature that all classic fairytales seem to have.

Ji-Won also said they chose Pinocchio because they ‘wanted to have a fanbase first’ to base the game off. We can only hope that their adaptation of the source material proves stronger than a desire for a fandom upon the immediate release of the game.

9: A. I Artificial Intelligence

Don’t let the sci-fi name deceive you; the story of A. I. Artificial Intelligence is strongly linked to the classic tale. Originally based off the 1969 short story Supertoys Last All Summer Long by Brian Aldiss, Steven Spielberg’s screenplay of a mechanical boy who gains a conscience is one all too familiar to audiences. Even within the film The Adventures of Pinocchio is read aloud from (in English rather than the original Italian).

As well as being the story of a toy longing to become real, A. I. Artificial Intelligence touches on many of the same themes that classic Pinnochio tales do. The robot boy, David, must grow as a being in order to achieve humanity and be really loved; Pinocchio had tasks from the Blue Fairy to accomplish before he could be a real boy. David himself makes these connections in the film, turning the little wooden puppet into an unlikely role model.

However, in another dark turn of events, David’s motivations for humanity are vastly different to Pinnochio’s. David longs to be loved by his mother, who rejects him after her biological son returns home. Pinnochio was a curious child who simply wanted adventure and life. Consequently, in A. I. Artificial Intelligence we see yet another heartbreaking (or just disturbing) reimagining of the tale from our childhoods.

In this Belgian-American 1960s film, the Pinocchio from Carlo Collodi’s short stories is sent into the vacuum of space. There are a few changes from the original, however - and not just the sudden introduction of the cosmos.

Pinocchio has been turned back into a puppet due to bad behaviour. He is also introduced to the concept of hypnotism, which he immediately decides to use to stop an evil space whale from destroying the galaxy, all of which includes a brief visit to Mars. Within the context of the Cold War ‘space race’, this film might be a little bit redeemable. However, with Pinocchio sporting a strangely designed jetpack, it’s evident that this chaotic mess cannot even be called propaganda.

Like many early twentieth century childrens’ films, Pinocchio in Outer Space endeavours to teach youngsters how to be nice to one another. However, its cringe-worthy script and some poor animation make it one of the biggest horror shows of this list.

Contrary to the last list entry, this is a purposeful horror film. Pinocchio’s Revenge is a 1996 psychological slasher film, because naturally, puppets are horrifying (as shown by the dead-eyed stare of the Pinocchio doll in the film). The supposedly possessed puppet bonds with the little girl in the film, and the friction between her and her worried mother present an interesting contrast to the wholesome father-son relationship we see in the original Pinocchio.

Additionally, this Pinocchio doll becomes more and more lifelike as the film progresses, in a horrifying take on the ‘real boy’ storyline. He only ever moves whilst the little girl is around, and as the film goes on his movements become more real: his lips move articulately, he goes from simply sliding his eyes in his freakish wooden head to being able to emote. Ultimately, the film suffers when it gets an actor to play Pinocchio instead of using the puppet. It loses its strong tropes of being a psychological thriller and instead becomes almost laughable. Regardless, it is certainly a bizarre take on a normally enchanting film.

Spinnolio is a 1977 parody of the classic children’s tale. A cynical undertaking that kills the magic, Spinnolio is a reflection of modern work environments, reflecting the fears that man would be replaced by machine. With this film being released only twenty years after Disney’s Pinocchio, the story would be clear in the public consciousness, including the belovedness of Jiminy Cricket… who is promptly eaten at the start of the film.

The purposeful lifelessness of Pinocchio is what drives the film and its plot, making it a bizarre and contrary retelling of the original tale.

Critics are divided as to whether this Japanese film is inspired by Pinocchio or not. Following a young puppet named Palme, who is sent on a journey by a magical woman to discover what it means to be human (sound familiar?) the prominent theme of this film is actually grief. Palme’s mistress dies shortly into the film, and his journey of self-discovery can be argued to be the story of a child mourning the loss of his mother.

Unlike other animated retellings of Pinocchio, this one is actually good. With half of the film being based in a magical realm called ‘Below’, the visuals are stunning, and transport the viewer into a fantasy adventure. Perhaps this is an improvement on the original tale?

This Italian remake of The Adventures of Pinocchio is one of the few adaptations that remain, at its core, a faithful retelling. The creator seems to have had an obsession with Pinocchio since being a small child and so it’s clear that his own journey into manhood is somewhat reflected in his cinematic retelling.

This live action remake of Pinocchio realises one thing: Pinocchio, in reality, is horrifying. The bizarrely human eyes beneath the CGI skin is enough to put this Pinocchio design on par with Pinocchio’s Revenge. Whilst billed as a wholesome family film one cannot help but wonder how many children had nightmares of their dolls coming alive.

This one might take the cake for being the worst and weirdest retelling of Pinocchio. With subpar voice acting (why is there a forty year old playing Pinocchio?) and low-budget animation, Pinocchio: A True Story certainly didn’t charm audiences. It was originally released in Russian, so the voice acting can be somewhat excused; regardless, its flat textures and anthropomorphised animals turn what was a gentle fairy tale into trashy children’s television.

Plus, for a movie that calls itself ‘a true story’, they certainly take liberties with the plot of Pinocchio. The child gets shot by a cat, and comes across as strangely queer-coded despite chasing after an obvious love interest, ‘Bella’. Furthermore, it contains a reference to Teenage Mutant Ninja Turtles, who certainly weren’t around when The Adventures of Pinocchio was first published.

Overall as both a retelling and “a true story”, this one feels like a fever dream.

A horror director making a Pinocchio adaptation. I wonder where this is going…

This stop-motion film, set to release soon, boasts a cast of famous voice actors as its main draw including Ewan McGregor and Finn Wolfhard. The animation itself is more resplendent of Coraline than of a fairytale.

The aims for this film were a different take on a classic tale, with a focus on artistry and the fact that Pinocchio is something that is hand-carved. The intricacy is clear, and the medium of stop-motion shows off the craftmanship of the design team perfectly. However, coming out in 2022 means that it is competing with Robert Zemeckis’ Pinocchio. Whilst that doesn’t make this list, due to just being a live action remake of the 1940s film, it is clear that del Toro’s creative vision makes his Pinocchio stand out. It certainly qualifies as a bizarre retelling.

As the iconic film of our childhoods, why would one consider this a ‘bizarre retelling?’ The reason for its inclusion on this list is due to the terrifying children-into-donkeys scene.

This scene was included in the original novel, and was meant as a morality tale. In Adventures of Pinocchio, the island is called ‘Land of Toys’. Disney modernises it to become ‘Pleasure Island’, a hellish amusement park. By making it more applicable to a 1940s American audience - full of teenagers who had lived through a Depression and children who were witnessing the birth of fascism - Disney ensured that the “morals” of the tale came home. Be good little boys and girls, do as you are told and do not be materialistic.

As a stepping-stone on Pinocchio’s journey, ‘Pleasure Island’ is a recipe for trauma. Pinocchio’s indifference to the brutal screams of his friends as they become donkeys further consolidates his nature as a soulless puppet boy. The image of Candlewick/Lampwick clawing at Pinocchio for help as he is turned into an ass is the stuff of nightmares, not like a delightful scene from a children’s film.

Through the animation and voice acting, Disney turned what is a charming and delightful film into a petrifying tale. Whilst they got across Carlo Collodi’s intent for the ‘Island of Toys’, they also succeeded in tarnishing the memories of youngsters for generations.

After all the renditions Pinocchio has gone through, one cannot help but wonder where the oaken fella will be taken next. Hopefully it's back to his more charming roots, bringing a sense of nostalgia for the 1940s film rather than embedding the puppet into popular memory as an object of morality and horror.

More stories from AJ Birt and writers in Geeks and other communities.