So You Want a Space Dog?

by TheOnlyStreetlamp :3 6 months ago in how to

The Basics to Breeding a Kubrow in 'Warframe.'

So it turns out being an intergalactic space ninja is a lonely gig. But one day you're running missions with other tennos and you catch sight of a four-legged fluffy boi trotting along side them.

Hey, where can I get me one of those?

Just like a real pet, they ain't cheap! But if you think you're ready to build a best friend, then lemme throw you the basics. In your codex (found on the left hand side at the front of your ship) there's a quest called Howl of the Kubrow. Start that badboy up and that's where you'll find the Incubator Segment.After that you need two things, a power core (which you can find the blueprints to in the store for credsss) and a kubrow egg.

Only the coolest pups are hatched on Earth. So find some easy missions (exterminate or capture are good ones) and bust open every kubrow den you find! It might take a few mission runs if you're unlucky, but when you get one, it'll show a pretty picture at the bottom of your screen and you're good to head back to your spaceship with your capsule-puppy in tow.

(Keep in mind you can't stock up on eggs as you can only have one in your inventory at a time!)

Now you gotta build all that nonsense. Like an IKEA shelf without any of the required screws and bolts, the power core will send you across the galaxy in search of...

I'm sure you've seen the beautiful spots and adorable hound socks of your friend's kubrows, however, your first kubrow is randomized; a Heinz 57 if you will. Now that's not a bad thing, as maybe it'll have other traits used to breed new kubrows. You might even get hella lucky and end up with a lotus patterned kubrow (the highly sought after fur marking) as your first one (I always found the randomized eggs pretty exciting to be honest :3 )!

After an eternity of waiting for that egg to hatch, you will have your pupper (You've only get one chance to get its new name perfect so get creative ;D )! However, the little sucker isn't ready for battle just yet. Kubrow puppies make adorable additions to your ship as they follow you around and snooze on your navigation floor. But in two login days, your fuzzball can be activated into a beastly fighting machine ready to face the dangers of the Tenno world with you.

Last but not least you've got one more mission, to get your puppy a nice collar (follow that quest to Earth and get fashionable).

Congrats, you own a kubrow! But what kind? They are all great fighters so dontcha worry! There are currently six breeds and they go (very) roughly like this:

Sahasa: They like shiny things. When their mouth isn't full of Grineer armour, they'll dig them up for you.

Chesa: Also like shiny things but prefer the ones your enemies are carrying. They'll take the bad guys out and retrieve their handbags.

Sunika: Have you ever seen an angry police Shepard? That's a Sunika, lunging at the end of her leash and ready to tear something to shreds. Unfortunately for the Corpus, leashes aren't the Tenno way.

Huras: Sneaky little boi. Shhhh, you'll never see him coming ,and his stalk ability means he'll throw an invisible shield on you too.

Raska: Your personal body guard. A Raska has a tanky shield that'll look after you when your stats are feeling down.

Helminth Charger: (A personal favourite of mine) This is not your starting puppy. This sinewy beast is part kubrow, part infected virus. It's got a lasso of a tongue that'll drag enemies to their doom (I'll be making a separate article on how to breed these adorable monsters later on).

Important! Kubrows have unstable DNA, this means they will deteriorate unless you grab them some DNA stabilizers (bought in packs of six from the store for 75,000 creds). Use one every time your pup gets around 60 health.

When you're not logged in, your kubrow's DNA doesn't take a break, so if you're going to be gone a while, throw him into the kennel (a.k.a. Stasis) so he'll stay in good shape while you're gone!

I think that's the basics covered, good luck out there space ninjas. 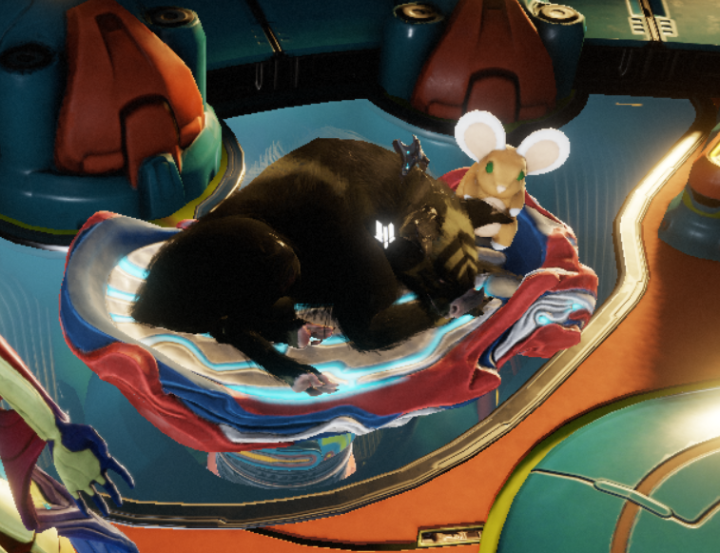 Having a snooze after a long day of galactic exploring