Hippos and Hyksos: How Loud Hippos Caused a Civil War in Ancient Egypt

by Alexa Baczak 7 months ago in Historical

A tale as old as time. 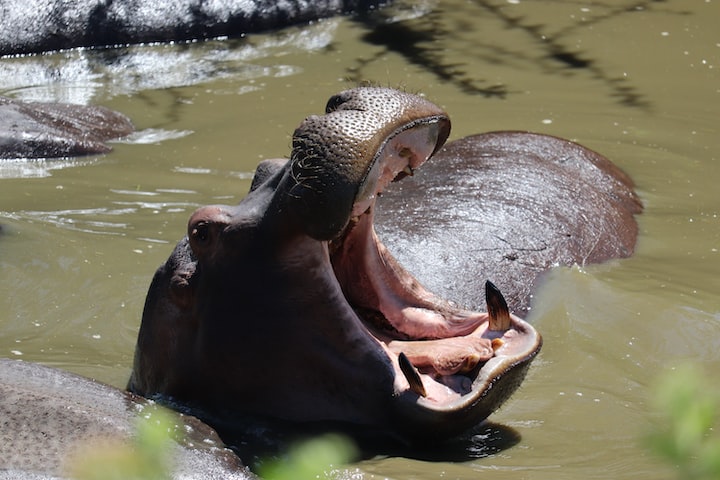 Photo by Sofia Zubiria on Unsplash

Nothing piques my interest like a good conversation about the Tudors. I know literally everything there is to know about them, but mmm, that drama though.

But drama doesn't start or end with the Tudors.

But this story isn't like any Egyptian story you've heard. This story is, if nothing else, evidence that humans have always been ridiculously petty. This particular time involved chaos and, out of everything, pet hippos.

So without further ado, meet:

To fully appreciate this story, you need some background.

A mistake is to think civilization was linear from Mesopotamia to Egypt to Greece to Rome (like what 6th grade history taught me). No civilization existed within a vacuum. There were always several cultures and civilizations interacting and impacting each other in various ways. I know. I'll get to the fun stuff in a minute, but I think this context is very important with this story.

It is also a mistake to lump the Great Pyramid, Sphinx, and King Tut together as what Egypt was always like. To put this into perspective: 1000 years ago, there were Vikings and England was barely England yet. Castles had just started being built. Egypt lasted three. They did not stay the same for 3000 years.

However, it is true that Egypt dominated the stage for thousands of years. And that makes this story even funnier.

Let me start with saying we don't know how much of this story is true because it was only recorded in the Nineteenth Egyptian Dynasty when it occurred in the Seventeenth. But honestly, this shit is too ridiculous to not have some truth to it. It actually sparked the war that eventually led to the New Kingdom of Egypt.

In the Second Intermediate Period of Egypt, you basically had two rulers. You had the Egyptian pharaoh of Upper Egypt (which is actually the lower part because fuck you) and the pharaoh ruling Lower Egypt, who was a Hyksos ruler.

The Hyksos Period is notable because it is the first time a foreign power ruled Egypt. Trying to conquer Egypt was every new civilization's rite of passage, and the Hyksos were absolutely not one of them! But they started it!

They were people who probably emigrated from Canaan and just took over Egypt one day. In truth, there's no consensus on where they came from or why. What we do know is there was an uptick in Caananite immigration to Egypt in the Twelfth Dynasty, and many of them lived in what would eventually become the Hyksos capital of Egypt: Avaris.

Side note: What distinguishes one Egyptian Dynasty from the other is based on literally nothing. The Thirteenth and Fourteenth Dynasty were occurring at the same time in different parts of Egypt!

"Hyksos" actually only refers to the kings of the Second Intermediate Period, but for convenience's sake, let's just call them Hyksos because no one really knows what else to call them. Some Egyptian scribes say they came from nowhere and took over violently, but that wasn't really the case. The end of the Thirteenth/Fourteenth Dynasty broke up power in Egypt because of various stressors, and the Hyksos were like, "Oh, is no one going to take this spot? Guess it's ours now." (Recent evidence also suggests Hyksos women married into Egyptian elite families. I have sources at the end of the article for your research rabbit hole pleasure!)

Once people realized what happened, yeah, there were some disputes. Much of what Egyptian scribes wrote around this time was anti-Hyksos propaganda. But it wasn't the bloodbath they whine about. There's very little archaeological evidence to suggest the Hyksos were fierce invaders.

I get it, dudes, it's a little embarrassing to get conquered without a fight. But that's what happened.

And the Hyksos rubbed it in.

After the Hyksos started ruling, they realized what they had done, which was take over part of what was the strongest civilization in the world. They had a few blips here and there, but the Egyptian civilization was pretty powerful from the get-go in ~3100 BC. Remember, the Great Pyramid had been around for a thousand years at this point.

Don't view this as me saying Hyksos bad Egypt good. Far from it. Tbh, I'd rub it in too. It's hilarious!

And the Hyksos didn't take over for the lolz. Egypt was a disorganized mess, and the areas where most Hyksos lived were left behind in all the bickering. They needed organization and to come up with their own plan, so they did.

The Hyksos put their names all over Egyptian architecture and art. They redesigned Sphinxes of earlier Egyptian pharaohs. And the Egyptians reacted by writing that they took over through bloodshed, confusing Egyptologists for several years.

And that is why we can't assume Apepi's story is 100% true. However, given that the Hyksos made Egypt something of a joke, it is likely something of this nature did happen.

In ~1580 BC, there were two Egyptian rulers. Seqenenre Tao who ruled in Thebes, Egypt and of course, Apepi, who ruled in Avaris. Up to this point, Egypt mostly grumbled about the Hyksos, but tolerated them. The Hyksos likely viewed Egyptians as disorganized traditionalists who were full of themselves.

The Hyksos, particularly Apepi, even adopted Seth, the Egyptian god of chaos, as their patron god. There are several arguments as to why, including that Seth was the closest Egyptian god to their main god, Hadad, and Seth being the Egyptian god of foreigners. And remember that the Hyksos rule rose out of Egyptian chaos.

One day, Apepi woke up and decided to send a messenger to Seqenenre Tao to complain that his pet hippos were too loud and keeping him up at night. (What I would give to hear the messenger's thoughts on the whole thing…)

Except for the fact that Seqenenre Tao lived over 700 kilometers away.

According to the story, Seqenenre Tao was speechless when receiving the message and didn't know how to proceed. Which is fair. That's a hard burn to respond to. And unfortunately, we don't know what Seqenenre Tao came back with. (Probably because it wasn't nearly as funny)

The most interesting interpretation of this I've seen is that Apepi was complaining about Egyptian disorder being difficult to ignore. Which I personally think is pretty likely given how Hyksos rulers viewed the Egyptians.

Whatever happened afterward, this message ended up being the final straw for Egyptian pharaohs. Seqenenre Tao and Apepi went to war, and Seqenenre died on the battlefield. There's actually not much archaeological evidence about the war, and one of the only clues we have is that it started over loud hippos.

His son, Ahmose I, took over and expelled the Hyksos, reuniting Upper and Lower Egypt once again, starting the 18th dynasty - the first dynasty of Egypt's New Kingdom, which would last about 500 years and characters like Nefertiti, Hatshepsut, and, of course, Tutankhamun, would enter from stage left.

Basically: A message about hippos being too loud started the war that led Ancient Egypt into the New Kingdom.

After the Hyksos were expelled, anti-foreigner rhetoric was rampant in Egyptian texts. The Hyksos were painted as barbaric invaders the Egyptians had no chance against.

We know enough to know Apepi did something to taunt Seqenenre. Maybe it was just existing. Seqenenre may have been waiting for an excuse to declare war. We don't know. All we have is a hilarious story.

Want to research more? I learned this story in my Ancient Egypt archaeology class in college, but I did some fact checks to make sure my memory was correct. Here are a few sources I used!

Seqenenre Tao's Wikipedia Page (I used several Wikipedia pages as starts, but I found Seqenenre's page had the most relevant background and links)

Ongoing Hyksos Research Source 2 These are fun because they discuss ongoing archaeological research. So if you're like me and you like reading about isotopes and science, you'll love these.

Thank you for reading! If you want to read more of my writing, check out my newsletter.

Receive stories by Alexa Baczak in your feed
Alexa Baczak
Read next: The truth about Dragons