Baseballs Were Originally Made From the Foreskins of Horses

by Connor Brighton about a year ago in Historical
Report Story 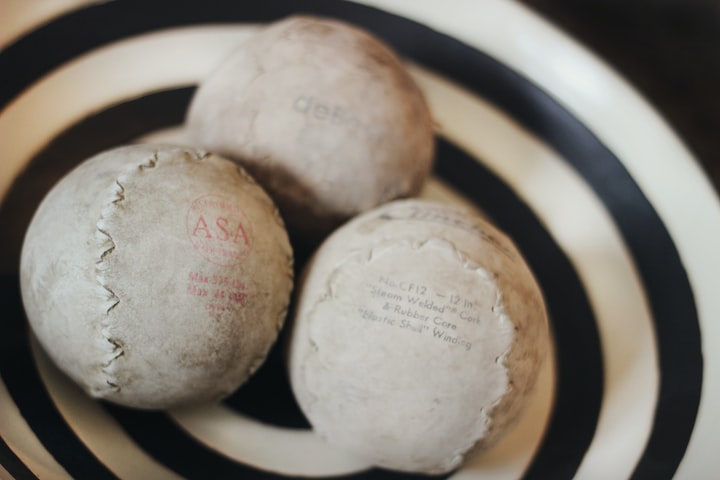 In modern times, we’re used to calling the Great American Pastime — “Baseball.” But it wasn’t always named that! Baseball used to be known as “Rounders.” It was first played in England in the 1500’s until the rule book was created in the 1880’s.

The creation of sports ball manufacturing has been evolving for decades. Since the 1970’s, baseballs haven’t been made from the conventional material that they’re made from today. Well, what were they made from?

Everyone knows that the colloquialism “pigskin” isn’t just figurative when it comes to football! Some people believe that they were actually created with a pig’s skin. This endearing term came about because footballs used to be sewn together with pig bladders. Pig bladders were believed to be supple enough to play with and were easy enough to inflate!

For centuries, before the paint tube was invented, painters used to store their paint in pig bladders. The paint was then tied off and distributed. When the artist was ready, they would puncture the bottom of the bladder and release the desired amount. This process was complicated because they would then need to seal the pig bladder paint for future use.

Soccer balls were another piece of sporting equipment that was made from pig bladders. Soccer balls didn’t have a regulated size because it depended on the variable size of the pigs bladder.

Like the paint tube, once rubber began to be mass produced, the football began to be manufactured with rubber. Soccer balls were also created with vulcanized rubber. However, the ball was more slippery in inclement weather.

Eventually the football found its final skin — cowhide! This material may seem ironic. But the evolution of a cowhide football allows players to have a better grip while playing the game. Cowhide is just a fancy term for leather.

What is CTE? CTE describes how the brain declines from repeated head trauma. This is seen from bean ball hits to the temple and when players are knocked out during football from a particularly aggressive hit.

One of the first batting helmets in 1908 was made from leather in an attempt to protect a players head. We didn’t know much about CTE back then, but head injuries were a common practice in football and in baseball.

Baseball players wore equipment that didn’t adequately protect their body. Originally they didn’t wear any protective equipment, which is how the term “bean ball” came about. A beaner is when a player is trying to strike an opposing player in the head. If a pitcher is known to do this often, they are known as a “headhunter.”

Headhunters don’t face any repercussions for this outdated and harmful practice.

Baseball games have had fatalities since its inception. A baseball is capable of traveling over 110 miles per hour! Why was it so dangerous to play? Helmets weren’t commonly used in the game until the 1970’s. They evolved relentlessly over the decades, but it wasn’t until the 1960’s when helmets began to be designed with metal and hard plastic to protect a players head and temporal lobe. Who died?

On a grim day in August 1920, Cleveland Indians player Ray Chapman was hit in the head with a bean ball and lost his life 12 hours later.

Back in the day, pitchers tried to make the ball difficult to see. Like camouflage, pitchers would scuff, scrape, put dirt, tobacco, spit, licorice, and many other things on the ball in the hopes that it would be more difficult to see and hit. It was believed that Chapman never even saw the ball that struck him in his temple on that fateful day in 1920.

Upon hearing the news, Chapman’s pregnant wife fainted. Thousands of devastated people attended his funeral. He was only 29. Despite his untimely death, baseball helmet reforms didn’t begin for over 30 years.

The game of Golf originated in Scotland. Some believe that the etymology of golf means “Gentleman Only, Lady’s Forbidden” as an acronym for its name. This is a myth! However, golf did originate as a discriminatory game for men only, which is how this well-worn phrase came about. What were golf balls made out of originally?

Golf balls used to be created from cow hide and stuffed with goose feathers to help it travel more quickly.

You may have wondered how baseballs are manufactured. Are they made from horse foreskin or was that a myth? You may be surprised to learn that baseballs are actually sewn by hand. The company tried for decades to invent a machine that could mass sew the balls, but they weren’t able to.

Baseballs are made of a durable rubber coated cork. But that’s not all! They are then covered with three layers of wool yarn and cotton yarn. According to Sports Rec.com, they are then “coated in latex adhesive or rubber cement and covered with cowhide. Stitching is then done with red cotton thread to yield 216 raised cotton stitches.”

These days, horses are a beloved farm animal. They are treated like pets and presented at horse shows and ridden in races. However, they weren’t always prized as they are now. Horses used to be used for transportation and power. Their skin was used to make luggage, purses, and rugs. Similar to how cowhide is now produced to make shoes, footballs, and gloves.

Cowhide is seen as a more human product because we eat the meat and use the hide. For many people, horse meat may seem repulsive to eat.

Love sports and travel! Fan of almost every major sport and a soon to be world-renowned traveler (mostly interested in the food and drink of other cultures!)

More stories from Connor Brighton and writers in FYI and other communities.