A Surfeit of F*cks 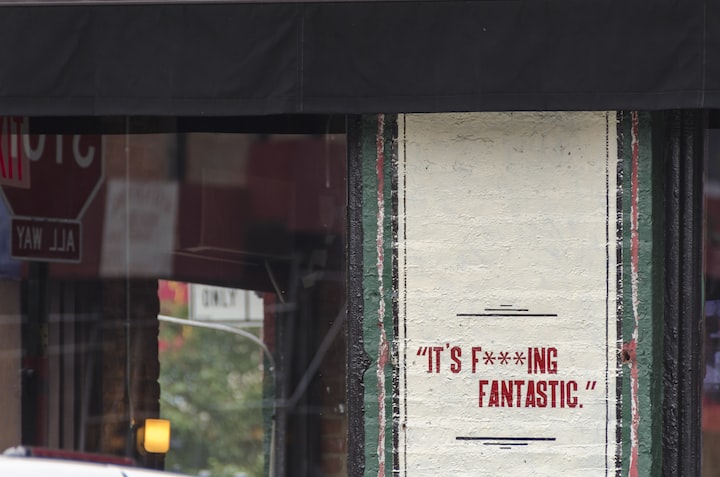 Photo by Etienne Girardet on Unsplash

A Surfeit of F*cks

One bright morning in April 2021, I had just exited a ramp and was merging with traffic. It seemed one of the other drivers was going to sideswipe me and so I laid hard on my horn and simultaneously yelled, “F*UCK YOU!!” They couldn’t have heard me, both our windows were up, the expressway thundered with the noise of dozens of cars. Still, it felt good to say that out loud. That wasn’t the first time I hurled that expletive in the 6 years I’ve been in the United States. It’s been a surfeit of f*ucks in God’s own country.

Once upon a time, I found curse words completely abhorrent and taboo. I could count on the fingers of one hand the number of times I’ve used the word before emigrating to the US. Now, I have lost count. Now, it’s f*cking COVID, f*cking truck, f*cking winter, etcetera, etcetera.

After a recent outburst against a video on my phone, this ‌hit me-I was using swear words with increasing frequency. I realized why. America has been a rollercoaster since year one. Things I’d never experienced coming here pelted me left, right, and center. Physical pain, emotional pain, illness, homesickness, culture shock, you know. Life happens. Oh, but hold your horses. I’m loving every moment, f*cks and all. No regrets.

I had lived a somewhat sheltered life in Nigeria. Also, the infamous feeling of isolation that is somewhat prevalent in America is not a thing in Nigeria. I had friends and relatives in every nook and cranny. I have made awesome friends here in the United States as well, within a few months of stepping off that British Airways flight on that chilly February day back in 2016.

However, America, land of the free and home of the brave, has shown me its beauty and its pain. I learned quickly to take punches and keep moving. No time to cower in a corner and cry for mommy. No time to ask, “Why?!” It’s happened, swallow your tears, and continue to live on a prayer. Move on. Take deep breaths and seize the day!

Science says cursing is good for you!

Cursing is rough, vulgar, and can quickly go from mild to risque. But it has its perks. I think it’s an outlet for pent up emotion- I suppose it’s better than punching a hole in a wall or someone.

Curious to see what science had to say about cursing, I went digging and found studies that say cursing can help you power through physical pain, help you cope with intense emotional situations or stress and build bonds with people.

In this interview with Healthline, Dr. Raffaello Antonino says, “Swearing can have a truly liberating effect when we’re feeling bottled up with frustration.” I find this to be true because I get some relief when I yell out expletives to no one in particular. Ain’t that something?!

Catholic guilt. I consider myself deeply religious and so I sometimes grapple with daily coping mechanisms (swear language, for example) and the expectations of my Faith. I say a quick prayer before heading out to work, and then somewhere along my route, I ‌ let out an expletive. Wow! Not very Catholic, are we? Guilt is a powerful emotion. It can lead to monumental decisions, or it could lead to crippling limbo.

Nigerian Roots. My roots are hard to ignore- it doesn’t matter that I am thousands of miles from my birth country. I was taught to respect elders, to choose words wisely, to be a lady, to set an example for my younger ones and bring honor to my family and community. These are values I hold dear and try to keep alive.

Life throws lemons at EVERYONE. Circumstance exposes our true nature, our true grit. So what if my lemonades are a little laced with f*cks, I'm not seeing the bottom of bottles or sharp ends of needles. That’s what I tell myself when things get turbulent-emotionally, physically or mentally. That’s what you should tell yourself too. I think.

Born in Nigeria, made for the world!

More stories from Funke Konrad and writers in FYI and other communities.