by Stephanie Hoogstad 23 days ago in book review
Report Story 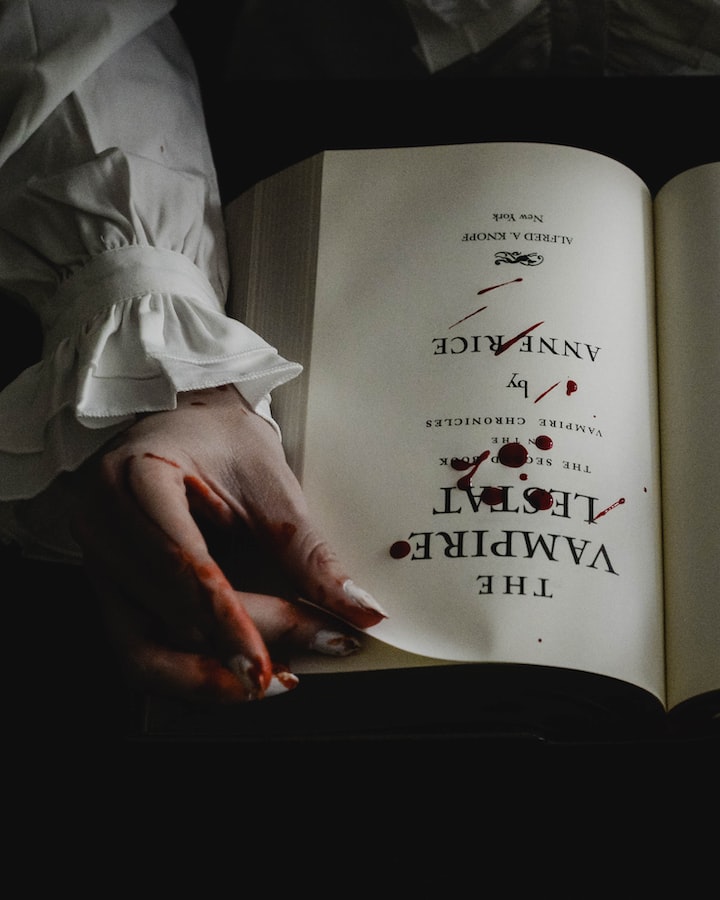 Photo by Loren Cutler on Unsplash

On December 11, 2021, the world lost a truly great author and human being: Anne Rice.

For those who don’t know, Anne Rice is a popular author best known for The Vampire Chronicles and the iconic Lestat, known lovingly by fans as the “Brat Prince.” She also wrote The Witching Hour and other books about the Mayfair Witches, The Wolf Gift Chronicles, the Sleeping Beauty erotica series, and Christ the Lord: Out of Egypt, on which the 2016 film The Young Messiah is based. She is also the mother of another author, Christopher Rice.

Today, I want to honor this Gothic legend--and arguably my mother's favorite author--by taking a look at some of the advice she left for aspiring writers before she departed this Earth.

I hate to admit this, but I have yet to read any of Rice’s books. I know, I know, how can I be a fan of the supernatural/paranormal and Gothic genres in this day and age if I haven’t read The Vampire Chronicles? I could defend myself by saying that I’ve seen both Interview with a Vampire and The Queen of the Damned, but I know as well as every other reader or writer that the movies can never hold a candle to the books. I plan to someday--hopefully soon--read Memnoch the Devil, but that day has not yet arrived.

I do, however, follow Rice on social media for the interesting news articles she posts and her invaluable advice on writing and succeeding in the publishing industry. (After her death, those accounts were taken over by her son and others.)

I decided to focus on the following quote, advice which she posted many times:

In your writing, go where the pain is; go where the excitement is. Believe in your own original approach, voice, characters, story. Ignore the critics. Have nerve. Be stubborn.

We all know that, at its core, writing is an act of courage. Writers dig deep into their psyche, their emotions, and harness that raw power to create something that, if they're lucky, someone will want to read. All writers put a chunk of their souls into their work, no matter the subject matter or genre. That’s how all creative types do, whether they’re writers, painters, architects, or even scientists. That’s why we take negative feedback so personally.

It takes courage to experiment in writing and to continue writing what you love. Step too far outside the box and the work will be pushed aside, sometimes ridiculed. Stay too far inside the box and the work will be ignored and labelled “cliché,” maybe even "boring." If readers have become accustomed to you writing in one genre, stepping outside of it may alienate them (which is why some writers opt to use pen names). If you stick with your preferred genre too long, you’ll be called a one-trick pony and forever associated with that genre, for better or for worse.

People will judge you so long as you’re brave enough to put your work out there.

That’s why Rice’s words are so potent. Writers must dig deep and go where they have the most passion, whether that passion be pain or pleasure. I know from personal experience that it’s hard–I often freeze up at the thought of going into the more…passionate areas of my psyche–but the effort pays off.

More importantly, writers have to let themselves use that passion without worrying what others will think. That first draft is for you alone. Tap into the pain, pleasure, depression, anger, and excitement and let it lead you where it may. After that, rewrite it into something you would want to read. You will want to keep an audience in mind, but don’t censor yourself because you’re worried that some critics will throw their two cents in. Remember, some of the biggest literary classics started as failures during their first run.

Thank you, Anne Rice, for reminding writers of what we seem to forget too easily: write for ourselves first. The rest will fall into place.

This article is a revised version of the post "Writers on Writing: Anne Rice" from my blog, The Writer's Scrap Bin. You can read the original piece here.

With a BA in English and MSc in Creative Writing, writing is my life. I have edited and beta read as a freelancer for a few years with only a couple published stories of my own.

You can learn more about me at thewritersscrapbin.com.

More stories from Stephanie Hoogstad and writers in Futurism and other communities.