NR
by Ninaka Randall 14 days ago in future 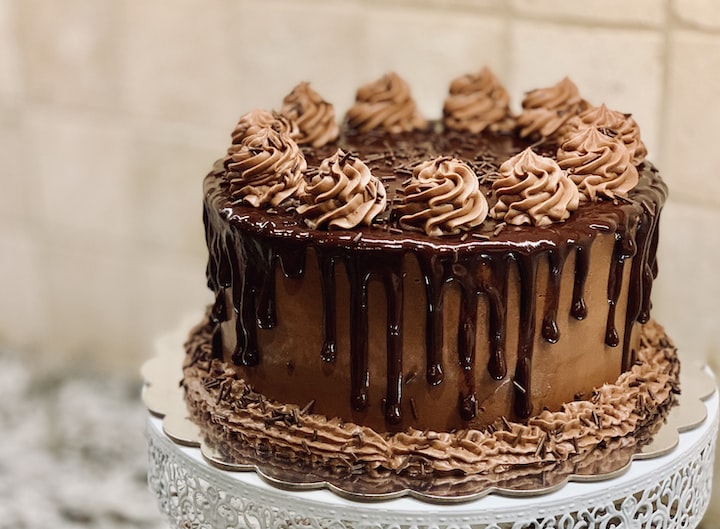 As I stepped into the bakery, the bell jingled behind me. I was suddenly surrounded by the amazing aroma of fresh baked goods, and the warm chatter of people enjoying their food. I sighed — I was at my happy place.

When I was little, I used to be obsessed with cake. I feel like that fact isn’t very surprising because what kid didn’t love sweets? However, cake wasn't just my comfort food, it was the beginning of a great mission. I remember dragging my parents out of bed, to take me downtown to our local bakery, just as it opened up. The bakery owner, Maggie, came to love me and let me try out all the cakes. Soon, when I was old enough, and much to my parent’s relief, I was able to bike there on my own.

Nothing has changed. My love for cake nor this cute little bakery I have come to love so dearly. Or even sweet Maggie, who always had a bright smile on her face and talked about her creations with excitement. The sparkle in her eye could be seen from across town and her love for what she did was so inspiring. I have never seen someone so committed and passionate about her craft as she was. Maggie became more than the owner of my favorite bakery, she was a mentor and a friend.

“Hayden!” Maggie called out when she saw me. I offered her my biggest smile and a quick wave as I approached the bakery counter.

“Smells great like always. What do you got for me today?” She wrapped a cookie in tissue paper and handed it to the man in the front of the line. He murmured thanks and left five cents in the tip jar, walking to a table in the back before lugging out a massive computer.

“Something fun,” she smirked. “I have something special for you today,” and placed a chocolate cake on the countertop, my eyebrows scrunched up in confusion.

“No. This,” she handed me a piece of paper along with the box. Two addresses were written across the page in her neat cursive writing. “Bring the cake, but don't eat it. Go to that first location.” I wanted to ask her more questions but she went back to taking over the orders.

The address brought me to a place far too familiar, the town park. It's funny because none of us use the actual address, we just say park, so I've never seen it written in writing before. Knowing Maggie and how well she knew me I went to my favorite place, a small hidden sanctuary I have made for myself. It was where the plants had overgrown, but I made a secret doorway and cut my way through it to make a little nature hideout. As I pushed my way past the leaves I was met with another plate of cake. A note was left underneath and I lifted the box to take it out. Dear Hayden, it read, my name is Leo and I am too a loyal customer to Maggie’s bakery. Maggie has left me pretty much in the dark, but I’m pretty sure she wants us to be friends because we both have a mutual love for cake

Leo explained to me what was going to happen. We’re like cake-loving pen pals for right now, or at least that's what I think. I would, too, write him a note, telling him about myself, and then write down the second location that Maggie had given me. I would bring the chocolate cake, and eat the one left for me, which seemed like it was also chocolate.

The following week I arrived at the bakery with the same task. I took the cake Maggie gave me, this time it was vanilla and biked to one of my favorite cafes. Maddie, my favorite worker, was there that day and I asked her if there was anything for me. Her eyes lit up as she handed me another cake box and a letter. I gave her mine and took a seat at a free table to read what it said. Leo told me a little about his home life, he was my age, but lived in the city! Although the city was a bit of a drive, Maggie’s bakery has been his favorite since he was little, and loved taking the drive to support Maggie and eat cake. He had a few siblings and made a lot of jokes that I thought were hilarious. It was crazy how I had never met him and I felt like I knew him.

Weeks went by where we would do this back and forth, Maggie would take us to all these different places, whether in town, the neighboring towns, or even the city! One night, I was reflecting on how big of an impact Leo has made on my life. I know he didn't complete me in a way where my life was empty before, but I couldn't help but notice how full my life felt like now. Even my parents were commenting how I seemed happier to them.

With Leo quickly becoming my best friend, I was dying to finally meet him in person. I entered the bakery as it was about to close, and asked Maggie if we could meet. She smiled but gave me a very taunting and assertive no. Leo and I could've done it behind her back, however, our loyalty to Maggie outweighed everything else, so we gave in and patiently waited. We realized as much as we wanted to meet, staying within the safety of our letters, was comforting. It felt comfortable and safe — most importantly, it was ours. We would talk about what we would do together, and soon enough, Leo’s letters became the highlight of my day.

The next day, I arrived at the bakery, rushing to the front to Maggie. She was busy packaging one of her popular sweets to a little girl and her mom, the girl's eyes wide with excitement. I smiled down at her and then at her mom and reached in my wallet for the five dollars for the treat.

“On me,” I gave it to her, and at first she resisted but I reassured her it was okay.

“There's nothing better than dessert,” I said. I watched the mom leave with her daughter. I have always been someone who cared about others, but talking with Leo made me more so. He told me about his amazing story of growing up in a poor neighborhood but being the best student in his class. He was the first member of his family to go to college and told me how his community held him together. Without them, he said, I wouldn't be where I am today. Maggie broke into my thoughts, grinning ear to ear.

“You’re thinking of him aren’t you?” She asked and I blushed but didn't answer. I knew she knew. Of course, she did, she knew how this was going to go. Maggie handed me the note but there was no box.

When I arrived, I felt like my heart was going to jump out of my body and do summersaults. The whole world stopped as I looked at him and he looked back at me. He was here. This almost fantasy that I thought I dreamt up was now concrete and tangible.

“Hi,” I said, a big smile spread across my face.