by Patrick Juhl 8 months ago in fantasy 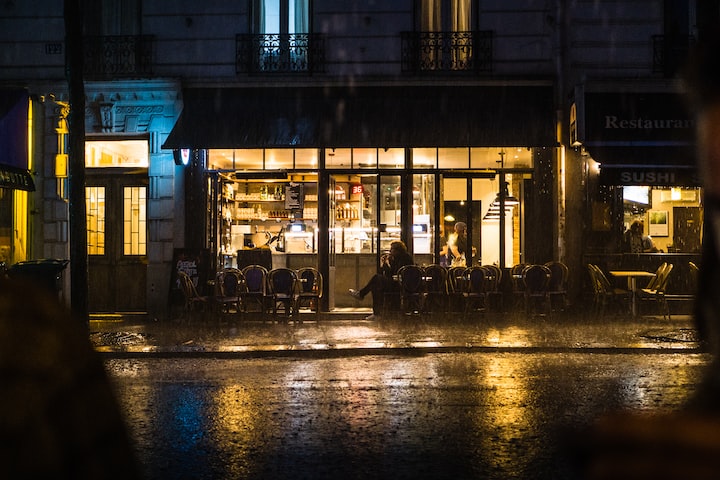 Photo by Matthee on Unsplash

The restaurant glowed across the parking lot like a warm bed of embers, barely reaching the smattering of dark cars that huddled in the pounding rain. The charcoal-colored blazer that Vince held over his head blocked the worst of it, but by the time he had run the fifteen feet from his car to the restaurant, the coat was already soaked through, uniformly darkened by the deluge. His pants and shirt were wet from the chest-down, perfect for his mystery date with his sister’s mystery friend, Sadie Emerson. Only his hair and shoulders remained mostly untouched as he locked his car with a chirp and fell through the door.

Inside, it was warm and dry, and the rain pelted the roof with unrelenting solidity. The restaurant only held a dozen tables, and each was separated into its own intimate world by diaphanous, white draperies. The warm glow of candlelight seeped through them and shimmered shadows on the walls, reflecting off wine bottles that decorated shelves and surfaces all around the single room. A black-suited old man with a shock of dandelion-whit hair led Vince to his table. The warm light twined with the rush of the rain and filled the space so completely that there was no room for the anxieties of the world outside, though he was wet and cold.

15 minutes late, and his mouth already curved around an excuse, ready to spit and pray, but when the host delivered Vince to his table, past faces rapt in conversation, all oblivious in their separate worlds, he discovered that it was empty. One part of his heart rejoiced at his fortune, while the other fell at the sight of that empty chair across from his.

The host assured Vince that the table had been quite empty all night, and, a handful of minutes later, a waitress brought him two glasses and opened a bottle of a deep-red Cabernet. He poured a glass and sipped on it. It was a finer wine than he would ever buy, were he dining alone, but it was a special occasion. The first sip dripped down into his stomach, cool at first, then warming, and the last of the stress that he did not know he had been holding melted from the top of his head, down his shoulders, and out his back, like an egg cracked on his balding pate. He reclined further into his seat, content to wait, sip, and recollect.

Ten minutes passed, then twenty, and he had waved off the waitress who returned to take his order. He poured himself a second glass, tasting the piquant bite of the grape skins. Though he had planned to save half the bottle for Sadie whenever she arrived--if she arrived--before he knew it, he was placing the empty bottle back on the table. That was the moment when he realized what he had known all along: he would be dining alone. The anger and disappointment were simultaneously blunted and amplified by the drink. He ordered salmon picatta when the manager came to “regretfully inform” him that he needed to “order or to leave, sir,” and resolved that, if he were still alone when he finished his last glass, he would go home, and that would be that.

The last glass stretched infinitesimally, and his salmon was long-gone. Nearly two hours after his solitary date had begun, the last dribbles of wine slipped between his teeth, and he set the glass on the table with a rattle of finality.

He stood, dropped fifty dollars on the table, and walked unsteadily to the restroom.

By the time that Vince had finished, the final two couples had departed, and the venerable host was dozing against the wall, but the dining room was not empty. He nearly missed her as he unfolded his damp jacket. The sheer curtains muddled and distorted her image, rendering her pale and ghostly, but she was sitting there, alone, surrounded by the remains of his dinner and playing absently with the wax that dripped from the candle flame.

Vince peered around the curtains as he stalked towards her, and he realized he was walking stealthily, as though he was afraid he would startle her away. The curtains passed as he drew closer, each one falling away and allowing her visage to surface through them, and then she was before him, un-obscured.

She looked up and smiled, and Vince’s anger and frustration melted away as he caught himself smiling back in spite of himself.

“Vince?” Her voice was smooth and velvety, almost purring, and her midnight-black hair fell around her bare shoulders in tumbling tresses.

“Wha--” he cleared his throat and sat, “I thought that you weren’t coming.” He suddenly felt very small. She wore a tight fitting dress of deep-red silk, and her hair… Vince’s own balding head sweated in the candlelight.

“I got a little held up. Have you already eaten?” Her teeth were perfectly white and perfectly straight. Her nose was small and graceful, and the lightest constellation of freckles sprinkled across it.

“Yeah, but, you can order something though?” He spoke it as a question, not a statement, and she smiled a smile that filled him up with a warmth no wine ever could have.

“I’m not hungry, but I am thirsty, if you don’t mind.” She pushed a bottle across the table to him, and he realized for the first time that it was not the empty one he had left there. It was a full bottle that looked old and forgotten. The label was a faded purple, and he could just make out the name “Velvet Night” scrawled in handwritten calligraphy.

“Sure, yeah!” Suddenly, despite the fact that he already had one bottle of wine swirling in his head, he was very thirsty. He popped the cork from the bottle. It smelled rich and smooth as he poured two glasses and she took hers in one perfect hand. It was an ancient, full-bodied Merlot that threatened to carry him away on the first sip. He rolled the taste around his mouth realizing that it was a bottle he could not afford, but it was too late.

They talked, and he joked, and for the life of him, Vince would never again remember what they had spoken about. He only remembered that he liked to make her laugh. Her laugh was like a fine wine itself--lovely and intoxicating. The swell of her breasts rose and fell as she laughed, deeply, truly, and wonderfully. The perfume of her drifted across the table and he wondered, not for the first time, how he could ever have been so lucky, or how his sister knew anyone so beautiful.

“What are you afraid of, Vince?” She spoke the question with such sober clarity that it pulled his own mind down to reality.

Vince sipped on his wine and stared into the black depths of her hair. “I suppose--”

Before he knew she had moved, one perfect forefinger had been laid across his lips, and it smelled like honeysuckle and fresh rain. “Shhhh…”

Vince fell silent, and drank his wine. When he had swallowed the last sip, he looked up from the guttering taper, barely flickering out of the hollow of the candlestick. The restaurant was silent, and Vince realized that the music, which had been playing faintly all night, had disappeared, and the room was still.

“I guess I’m afraid of making… The wrong choice? Dying and realizing that I’d spent my life on… cooking shows or... ” he thought of his father. “Or tax collecting.” He had not known what he was going to say before he said it, but he knew that it was true. Sadie nodded and poured him a second glass, sliding it across to him, and he drank it silently, gazing into the flickering candle flame. Vince did not mind the silence. His thoughts had been cast down and away by the wine.

He started, like a dreamer from sleep, when she asked, the last mouthful of wine swirling in his cup, “What choice would you make?” She asked it as the candle was barely sputtering.

The answer came immediately this time, and fell from between his lips. “Travel. I wanna travel. Prague, Mongolia, Japan.” He was surprised by the sobriety and confidence in his words. “And I, uh… I want to own a restaurant. Somewhere in Ireland, or somewhere like that. Italy. It’s where my family is from.”

Sadie smiled. “You can cook?”

Vince laughed a short, barking laugh, and tried to wave a hand dismissively, but he was drunk. “If you count toast”

“Well, there’s always time to learn.” Vince would swear that she looked through him.

Vince smiled back at her, watching the light dance across her face from somewhere that he could not discern, and swallowed the last mouthful of his wine. Sadie upturned the bottle into his glass and he sipped the final dregs slowly, savoring the richness.

Vince shrugged, still looking away. “My job,” he mumbled, “I guess. I’m a, uh… security guard. At an office building. Nights. I called in sick today to come here.”

“That’s not what’s stopping you;” She shook her head, as if it were sadly obvious. “That’s your excuse. What is stopping you?”

Vince looked her full in the face, then. In her beautiful, perfect, face. “Nothing, I guess.” And he knew that this, too, was true. “I’m just afraid of taking the first step. And I’m afraid…”

“Of making a choice that you can’t take back?”

Vince nodded, and suddenly he also felt deeply, irrationally, afraid of the woman sitting across from him.

“I could make it happen, if you wanted.”

Vince did not move--only stared into her dark, deep, eyes.

Slowly, he nodded his head.

“Can you give me something in return?”

Vince was reminded of stories of Rumpelstiltskin trading newborn babies.

Sadie crooked a finger at him and he leaned nearer. She said nothing, only tapped one perfect fingernail--a deep, deep red, that may have been black--against her crimson lips. As the candle guttered out, the midnight scent of her skin was headier than any wine.

Vince awoke the next morning with the worst hangover he’d had since his twenties, a head that felt ready to burst like a watermelon in the sun, and no memory of the previous night. When he listened to the voicemails on his phone--one from his boss and one from his landlord--that informed him that he was being fired and evicted (faking illness and missing rent) he waited for anxiety, the anger, the creeping dread to set in, but strangely, it did not.

Sadie Emerson had texted, apologizing for standing him up the night before, and hoping that he had not waited around for too long. She “just wasn’t ready to date anybody yet.”

He felt calm, and at peace with his current predicament. So he stretched his legs and felt a weight on the end of the bed. When he opened the envelope that sat there and counted 500 dollars in crispest 20-dollar bills, nothing in him was surprised, though he had no memory of withdrawing them. Nor was he surprised when he read the plane ticket for Shannon, Ireland, in three days.

He was not surprised when a bright, brass, key--old fashioned, with a long shank and three crooked teeth--tumbled from the envelope with a glint and a jangle, attached to a wooden key fob. In the shamrock green of the fob was carved: “354 Colcannon Street, Limerick.”

He turned the wooden key fob over, feeling as though something had been taken from him. A waft of honeysuckle and rain drifted from the worn tag and then was gone. Written there, as old as the key itself were three words:

Receive stories by Patrick Juhl in your feed
Patrick Juhl
Read next: Thinking About Nash’s Equilibrium