Under the twin moons. Part 1

by Wynter Wright 9 months ago in science fiction 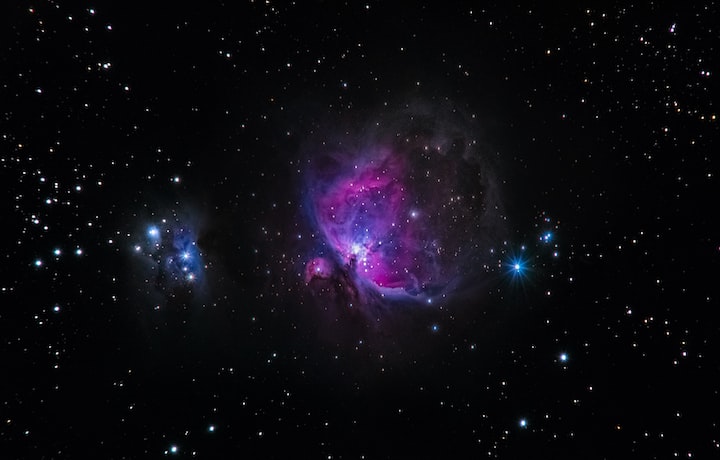 The silence of the void seems deep and unending, the oppressive sense of despair and hopelessness lingers among the wrecked remains of several dark hulking forms that drift around the edge of a small system of planets like a vengeful wraith.

Within the midst of the destroyed fleet, only one ship remains mostly intact. Debris orbits around the massive form as it slowly turns until one side faces the system's distant Star, revealing stenciled characters of an alien language scrawled along the hull of the ship. As it continues its rotation, the light of the star once more gives way to the eternal darkness of deep space. The hull is dark except for a faint pale glow from a single porthole among many that dotted along the hull.

Inside, a tall capsule stands, third in a row of tall, dark and silent capsules. Soft white light glows through the frost and ice covering the transparent lid, silhouetting a small figure inside. The only sound in the room is a slight hum of energy as it flows to the capsule.

Suddenly, the steady sound cuts out and the light within the chamber flickers before becoming steady once more, only dimmer than before.

Along the left side of the cover, a narrow holographic window appears with stylized and slanted characters scrolling down it. A moment later, the characters stop scrolling before turning red and flashing. A high-pitched wail sounds as the light from inside the capsule turns from a soft white to a pulsating red. The frost and ice along the surface of the cover begins to melt. Water runs down the smooth glass, revealing the figure of a young black-haired girl dressed in a dark grey skin suit resting within.

Suddenly, a flat low tone sounds, and a moment later the girl inside jerks and arches backwards. When her body relaxes, her eyes snap open with a look of terror. Her hands slap frantically at the cover until the light flashes from red to green and the pod's cover pops open. The girl spills out in a mass of fluid, hair, wires and tubes. She chokes and gasps for air, weakly fumbling at the tubs protruding from her nose and mouth. Once she gets a good grip, she gives them a sharp yank, pulling them free, her back arches once more as she expels the fluid and tubes.

Lyvlyn Arn kneels there, bracing herself with her arms and slowly drawing air into her lungs one breath at a time and allowing her heart rate to slow. After a few ticks, she slowly pushes herself to her feet, using the side of the capsule for support, and swaying for a bit before gaining her balance. Faintly glowing blue eyes glance around the dark room, taking in her surroundings. A thin pale hand lays flat over her chest as she stumbles her way towards a circular window. The view outside causes her eyes to widen in shock and sink back onto her knees.

Outside the porthole, instead of the glowing orb of her new home, the vastness of space stretches out before her. Floating around the ship was the wreckage of battle. It explained why there was no one else in the hibernation chamber. From her vantage point, Lyvlyn could see massive holes in the ship's hull. And the enviro suit clad bodies of the crew that manned those destroyed vessels. She could see the hulking remains of another nest ship drifting dark and cold in the distance. Tears burned the back of her eyes as the thought of her parents before they had evacuated her with the rest of the young off of the Homeworld. Were they out there, drifting cold and lifeless?

She closes her eyes to hold back the tears and clutches at the fabric of her pressure suit. There had to be someone still alive. How long had she been in the hibernation chamber? Turning to look back at the row of hibernation capsules, she shakes her head and gets back to her feet. She had to figure out a way to get the ship moving or a life pod or shuttle to take her back to Homeworld.

Getting to her feet, Lyvlyn stumbles over to the exit and places her palm over the control panel to the right of the door. The scanner flashes red and a string of characters scroll down the side. She utters a curse under her breath that would have earned her a sharp scolding from her parents.

Shoving the thoughts of her family from her mind, she turns from the door and scans the room until her eyes land on an enviro suit on the far side of the wall. With a sigh of relief that the crew had followed protocol, she ambles over and pulls the suit from its hook before stepping into the open back. Once situated, she pulls a small tab at her waist and the suit shrinks to a snug fit.

Returning to the door, she turns her left hand so the underside of her wrist is facing the ceiling. Taking two fingers she swipes towards her elbow causing a small screen to appear. After tapping a few command prompts, a light flashes green, then red and holds steady. The sound of hissing gas fills the room as the suit sucks in the breathable gases from her surroundings. A chirp from her wrist unit sounds and she looks down at the readout.

Reaching back she feels along the edge of the suit collar and pulls the heavy curtain of black hair forward. For a moment she just stares at it. The black strands almost reached the floor. She remembered getting it cut before the invasion. There had been an incident in her older brother's lab involving Peira Sap and some had gotten caught in her hair and it had to be cut out. Her mother had to cut it to the middle of her back to make everything even.

She winced remembering the tantrum she had thrown because she had looked like a hatchling. Now it was longer than before it had been cut. How long had she been in the hibernation capsule? A beep pulled her mind from her thoughts. She twists her hair and stuffs it down into the collar of her suit.

A moment later, a thin film seems to ooze from the collar of the suit and forms an orb over and around her head before hardening and locking in place.

A bright light on her shoulder flickers on, casting its beam out before her. She waits another moment until the little red light on her wrist changes from red, to yellow, and then to green and begins flashing.

She places her palm back on the scanner and taps a code with her fingers. The panel flashes red and more characters scroll down the side. She taps in another code, and it flashes red, a heavy clunk sounds then the light turns green. The door in front of her groans in protest, air hisses through the crack as it slowly slides open.

Lyvlyn taps her left heel and her boots magnetize to the deck plates when she feels herself being pulled towards the door by the force of the moving air, preventing her from being sucked out into the vacuum as the door opens the rest of the way. She waits for the room to equalize in pressure before unlocking her boots and pushing off the deck.

Your name Hello everyone,

I'm Wynter, at the moment just a writer of about million unfinished stories. I hope, one day, to become a full fledged Author.