The View from the Fishbowl

by Jorja Grace 2 months ago in science fiction
Report Story 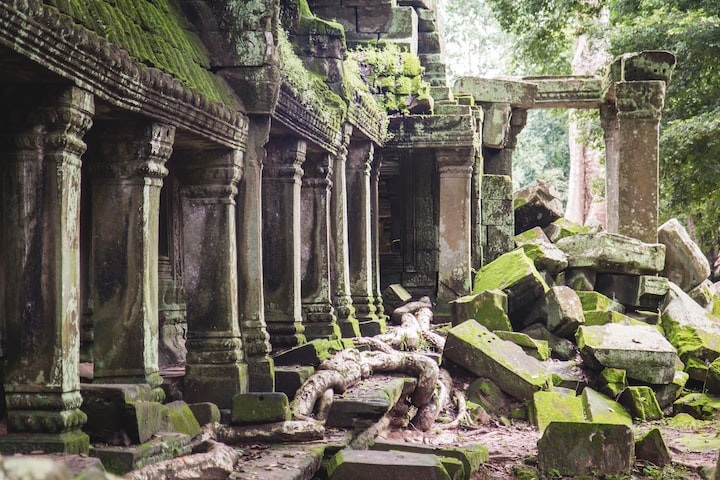 Photo by Raph Howald on Unsplash

“You know I could get seriously busted for this.”

“Hmm,” I muttered, pulling a thin stick of gum out of my pocket. “Don’t make deals you can’t keep. I thought you knew better than that.”

I unwrapped the faded silver paper slowly, tauntingly, and plopped the pink stick of gum in my mouth. Stiff as a concrete slab.

“I’ve been trying to stay out of trouble lately.”

“That’s what you always say. And yet,” I snapped the piece of gum between my teeth, nearly shattering my molars. “You still always seem to be in trouble.”

With enough convincing, the gum formed a malleable blob on my tongue. A fat pink bubble blossomed from my mouth. He licked his lips, eyes glued to the bubble.

I held my hand out and wriggled my fingers impatiently.

“Fine,” he sighed, never taking his eyes off the deflating bubble as he passed me the payment: a sleek white bodysuit with heat reflecting panels and an internal cooling system. “That better be some good shit,” he grumbled.

“I only serve the best,” I lied, and pulled the rest of the chewing gum out of my pocket. Seven sticks left in the package. That should keep him happy for a day. Or a few hours, knowing Cal.

I stuffed the bodysuit into my backpack, already overflowing with the other identical bodysuit.

“And the fishbowl?” I asked.

Always the comedian. His dark eyes glinted with that familiar mischievous light. In the dim light of the underground, his skin had a gray tint to it, but his eyes were the same dark brown as when we were kids. I tugged another stick of gum from the package and tenderly pulled off the silver wrapping. His eyes widened, his heart probably freezing mid-beat.

“I wonder how long six pieces will last you. Two hours?” Or less. The fifteen year old gum didn’t retain most of its flavor.

“You’re a dictator,” Cal groaned. He handed over the helmet, nonetheless. The back of the helmet was white to match the suit, but the front was smoothly curved plexiglass from hairline to chin. I slipped the fishbowl on my head. There was a scratch on the glass just over my left eye and some smudges on the inside, but it fit me alright. As long as the oxygen tank worked, I was happy.

“Be careful with that. My mom will kill me if she finds out I loaned it.”

I slipped the seventh piece of gum back into the packet and dropped them into his waiting hands. I blinked and he’d already unwrapped two pieces, shoving them into his mouth greedily. The glass of my fishbowl fogged with my laughter.

It was a miracle he didn’t break his jaw.

“I’ll have it back by morning,” I promised, yanking the fishbowl off my head. Tangled black hair pooled over my shoulders.

“Six a.m.,” Cal mumbled with a mouth full of pink chewing gum, “At the latest.”

I slung the backpack over my shoulders and raised my eyes towards the flickering white lights far above our heads. There was no way to tell the time in a concrete complex underground, but it seemed about time I got moving.

I had a schedule to keep.

“Be careful out there,” Cal called to my back. I waved my hand dismissively.

“Dani,” he said in that serious voice, when he gets real quiet and his eyebrows scrunch together. I glanced back. Sure enough, his dark eyebrows were squished into one long skinny caterpillar. “I mean it. There were more exiles last week and they might still be hanging around. I’m not so worried about you​, but ...”

Cal chuckled and the wrinkles on his brow started to shallow.

“If you find any more gum on your little adventure, you know that green shit? The stinging one--”

“I’ll keep an eye out,” I said, giving him a quick salute before I stepped into the glare of fluorescent light on concrete. Three steps and I glanced back; Cal was gone without a sound or a goodbye, vanished through the window of his mother’s concrete home in the suburban street of the underground.

I chuckled. He was as quick as he was troublesome.

My backpack straps bit into my shoulders as I jogged down the shadowed side-streets from Cal’s home to the identical concrete house thirteen doors down.

Ignoring the door, I climbed the fire escape and dodged the plastic flowers as I tugged on Mira’s window.The window slid open easily, and I rolled my eyes. How many times did I tell her to lock it? I ducked through the window and rose into the dark room on the other side.

Her room was tiny, barely enough for a bed and a small desk, but the walls were decked out with faded posters and drawings. A picture of planet Jupiter was plastered against the ceiling over her bed, surrounding Saturn and pluto. Some of her favorite planets, she said, though I don’t understand how one goes about picking a favorite planet.

Earth certainly wasn’t in the running.

Below the planets, Mira snored, her brown hair sticking up at embarrassing angles. If only we still had cameras! Two steps and I hovered over her.

“Up,” I whispered, flicking her forehead. Her eyes shot open and I cupped my hand over her mouth. “No questions,” I said quickly. “Put this on.”

Her gray eyes narrowed as I tossed a bodysuit on her bed. She rubbed her eyes and held the suit up, marveling at it. Her thin fingers ran over the slick fabric. She cocked her head at me.

“No questions,” I interrupted. “Get dressed. We’re on a schedule.”

I stretched the white suit over my clothes and waited for Mira to fight off the blankets and do the same.

“Where’d you get that one?” Mira asked, immediately breaking my no-question-rule. Typical.

“A reputable source.” Bodysuits were rare, reserved only for those who had to leave the underground for work. Cal’s mother was a messenger--a modern mailwoman that delivered messages between Undergrounds. “Now hustle.”

Mira tripped on her comforter as she clambered out of bed. I muffled a laugh as she zipped the suit over her body. The sleeves sagged around her wrists and puffed at her sides. At thirteen, Mira was still smaller than mom used to be. But those large eyes, that gentle tilt of the head, the little dimple on her cheek ... my stomach knotted at the similarity.

We slipped out the window, past her plastic flowers, down the fire escape and into the alley. Mira’s toes clipped my heels all the way past the suburban stretches of concrete homes and into the business district.

Behind the water distribution center was a pipe that pumped ocean water from the surface to be purified for the people of Underground #79.

Mira tilted her head quizzically as I pressed my hand against the pipe and cursed. Burning hot. Outside must be scorching.

I climbed into the service tunnel surrounding the pipe.

“Where are we going?” Mira asked as I jogged down the tunnel, wincing at the echo of my footstep.

Climate science journalist and short story author. I love using magic realism to capture a candid glimpse of the world

More stories from Jorja Grace and writers in Futurism and other communities.