by Edward German about a month ago in scifi movie

They came to save us from ourselves.

Do you hate war, pollution, or hard pizza rolls? You would love the 1969 science fiction/satire "The Monitors". This motion picture is based on a science fiction novel of the same name written by Keith Laumer and published in 1966. The story is about a group of friendly aliens coming to Earth and taking over the planet and its governments. The movie was produced by the Second City comedy troupe and co-produced by the Bell and Howe Corporation. This film was shot on location in Chicago, Illinois with the intention it would become a center of movie and TV production. The Monitors is minutes 92 in length and premiered on October 8, 1969, in New York City. 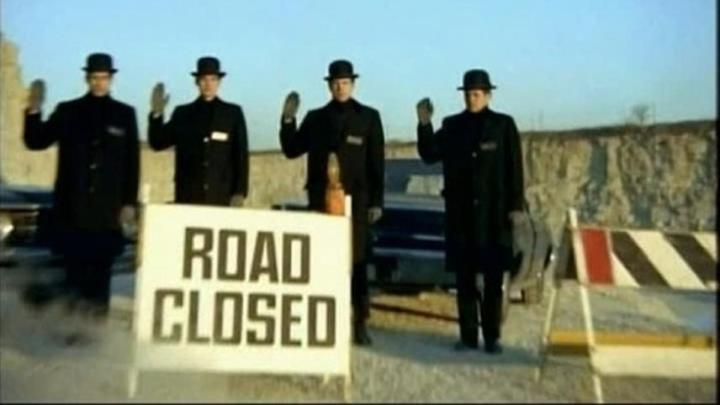 A group of Monitors attempting to block a speeding car.

The Cast of Characters.

First, there is the antagonist, The Monitors, they are aliens from another planet that came to Earth with the intention to save humanity from itself. By no means do they consider themselves conquers but more like teachers. They appear to be very curious about the nature of human beings and want to know more. The Monitors appear in human form wearing black outfits and matching bowler hats. Their weapon of choice is a spray can full of pacify gas which they invented and have used to control the world population. They are also using the media to promote their agenda which includes TV ads that always praises The Monitors for their kindness to mankind. 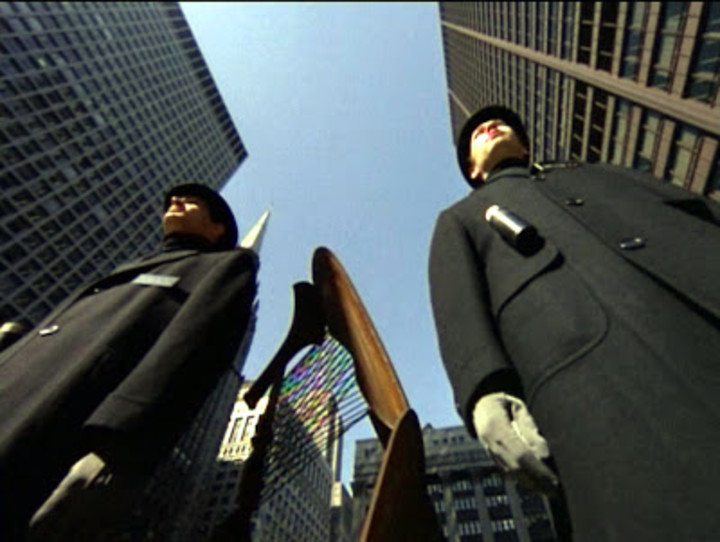 Two Monitors standing on the street. Note the spray can on his pocket.

The Protagonist is Harry Jordan, played by Guy Stockwell, he is freelance pilot and served in the U.S Air Force. He dislikes the Monitors control over mankind and seeks to terminate their presence. He latter becomes a part of the resistance movement.

Harry is flanked by his brother Max who is an unemployed promoter and latter becomes a part of the resistance movement. Max is played by comedian Avery Schreiber, and he provides for some the movies' comic relief.

The main supporter for the Monitors is actress Barbara Cole played by Susan Oliver. She supports the goals of the Monitors in every way and uses her celerity in that cause. Miss Cole says that "Everyone has to chose, war or peace, wealth or poverty" . When asked to spy on Harry Jordan, she does so in the name of the Monitors. 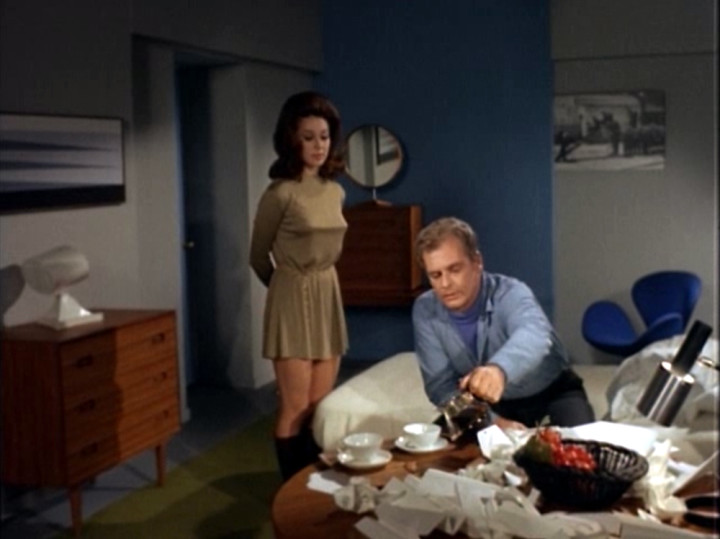 Harry Jordan in captivity by the Monitors.

SCRAG is the restance movement that is working against the Monitors. SCRAG stands for Secret Counter Retalitorial Group and is headed by Gen. Blackwish who is played by Keenan Wynn. Gen. Blackwish is aided by Col. Stutz played by Larry Storch, Stutz works as the generals right-hand man and aids anyone who opposes the Monitors.

The ultimate goal of SCRAG is to remove the Monitors by any means at their disposal. They use their agents to create discord between the monitors and the human population by initiating riots and protest against the Monitors. They even have a WMD at their disposal and plan to use it when the time is right. 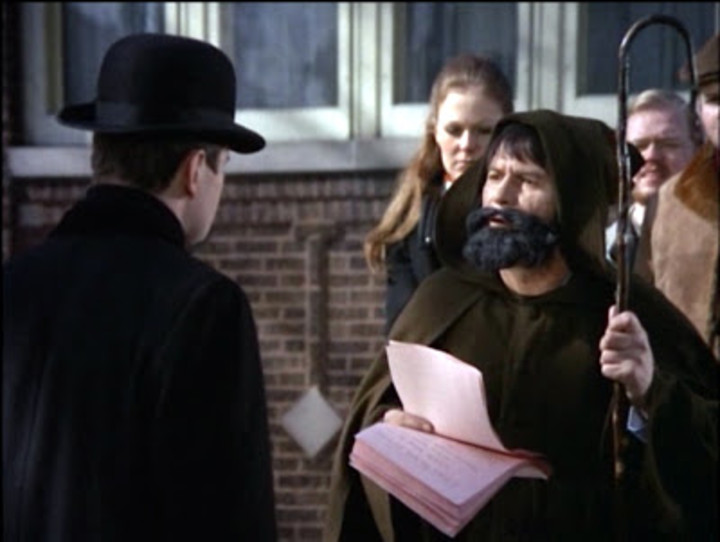 Col. Stulz disguised as a street preacher talks to one of the Monitors. 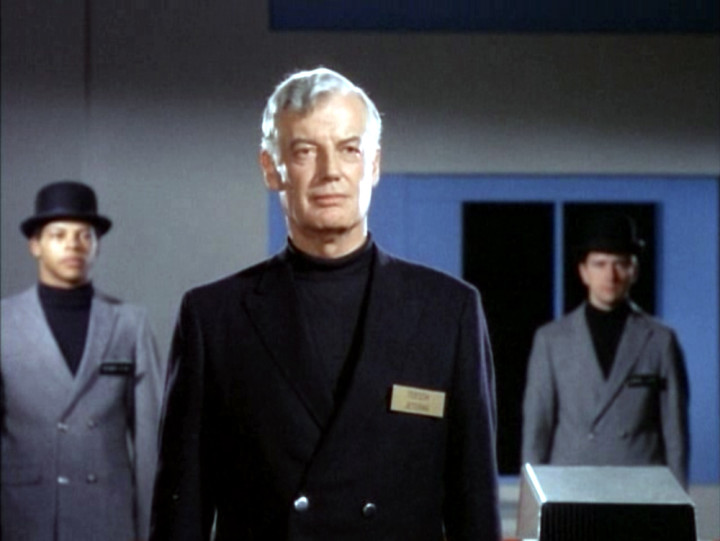 The head monitor, Tersh Jeterax, who overseas the Chicago branch.

This movie starts out by showing who the Monitors are and what they are doing for humanity. They are shown directing traffic on the street coroners to preforming surveillance on peaceful protesters who oppose the monitors. They constantly produce TV ads on how life is so much better under the supervision of the Monitors. Even local politicians are supportive of the monitors despite the fact that they no longer have a job. The monitors have taken over the functions of governments and have outlawed elections, however, the currently office holders remain at their post abet with no power to act. This is demonstrated by showing how the US President is reduced to doing nothing but working on crossword puzzles while sitting in the Oval Office.

Harry Jordan is hired to train movie star Barbra Cole how to fly an airplane but is fired from her job. Harry is attracted to her and decides to frequently date her. While he was out with her one day, Harry sees his brother caught up in a street protest against the monitors. Harry tries to rescue his brother form a group of Monitors who are dispatched to quell the protesters. However, at the moment, Harry, Max, and Barbra Cole get spirited away by Col. Stuz who disguises himself as a street preacher singing praises to the Monitors.

Col. Stuz takes all three persons to SCRAG headquarters to meet with the General, once there they are recruited into the resistance. Unknown to everyone else, Mrs. Cole is an agent for the Monitors, and she begins to spy on Harry and SCRAG. A part of her mission is to observe human love and explain to the Monitors. Mrs. Cole uses Harry as a test subject for this very purpose.

Latter on Harry gets captured by the Monitor after leaving the SCRAG compound. He is then taken to the headquarters of the Monitors and their leader, Tersch Jeterax, tries to turn him to their side. They seem to like him and believe he will see things their way. Harry is sent to a reeducation program and meets up with a fellow internee Mona, played by Sherrie Jackson. She aids him in escaping from the Monitors compound and makes his way beck to SCRAG headquarters. Once there, plans are discussed with the General who reviles that SCRAG has an Implosion bomb and is ready to use it against the monitors.

In the climax, Harry decides to carry the Implosion Bomb to the monitors headquarters and threats to use it. Much to everyone surprise the bomb fails to detonate. There is an exchange of dialog between Harry and Jeterax about the nature of human beings and how the Monitors are there to save mankind from itself. However, due to various forms of oppositions elsewhere in the world, the Monitors decided to leave very abruptly. The Monitors conclude that Humanity is not ready for their level of enlightenment as yet so it is pointless to stay on Earth. Once the Monitors leave, governments regain power and things get back to normal.

My thoughts on this movie. 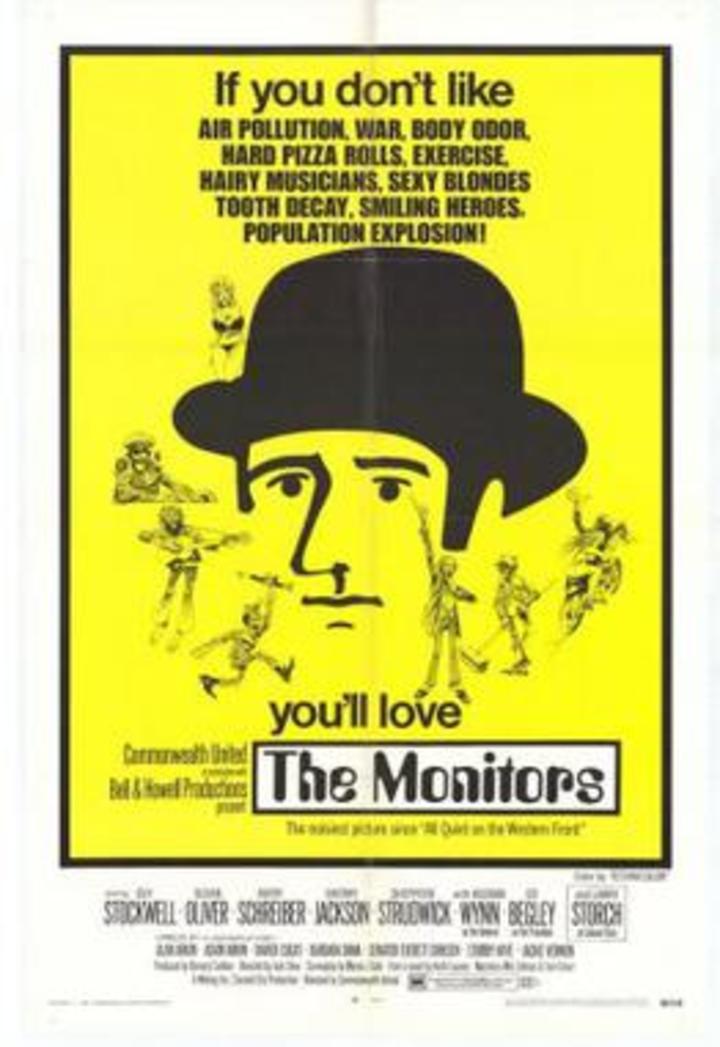 I had watched the movie in its entirety a few years ago via YouTube for the first time. I had seen parts of it on television when I was a kid but never knew what it was about until I got older. When I watched the movie, I was not sure what to expect. My impressions were that this is more of a thinking person movie than an action packed drama that movie goers are so accustomed to today. The movie was considered to be an oddity when it first premiered back in late 60s and didn't do well at the box office. Despite the fact that the film boosted of talented actors, critics still panned it. To me it is a charming movie that tried to play up on the social movements and politics of the time but failed to reach its audience. It does have its funny moments in it which does include some witty dialog and slapstick comedy. Overall I enjoyed watching this movie, I thought it was a not all that bad as it was said to be. It is indeed a product of its time and is charming in its own way. If you are interested in watching, it can be found on YouTube.

long time sci-fi fan who loves the internet. I am also writting on other subjects than sci fi.

See all posts by Edward German →