by Ida Thomasdotter 2 years ago in literature
Report Story

When it first broke out, the internet went crazy. Even the proper news started talking about zombie apocalypses, quoting pop culture as expertise, which was pointless; the dead never rose up, they stayed dead. 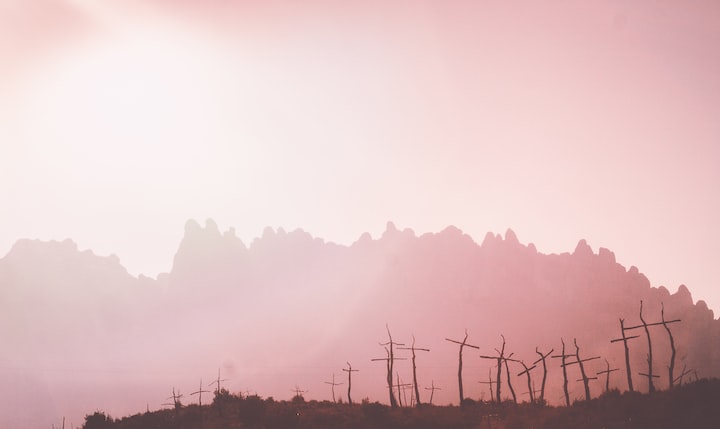 Photo by Rubén Bagüés on Unsplash

Jack had taken to carrying around a standard hotel Bible that he’d scoured off a corpse in a broken down DLR. I could hear him muttering prayers at night when he thought we were sleeping. That went on for a week. Then the fever found him.

When it first broke out, the internet went crazy. Even the proper news started talking about zombie apocalypses, quoting pop culture as expertise, which was pointless; the dead never rose up, they stayed dead.

Then people started turning to religion for answers instead. The problem with that was that the preachers tended to be the first ones to go. By the time the rabbis and shamans, and even the nuns and monks, started dropping like flies, we were quickly running out of prophets to turn to.

Churches and temples got cordoned off and whole congregations were quaranteened in government issued chambers, that the free press had fun putting into collages with photos from the holocaust for a while. When it became clear that the journalists were the next to get it, they abandoned the click bait headlines and started teaming up with the scientists to try and find a solution instead. The scientists, as it turned out, didn’t find their help very helpful. They actually seemed relieved when the last of the journalists died, which happened within weeks of the first crisis correspondent coughing during a live video.

After the journalists, it was the screenwriters and the novelists turn. The poets, for some reason, were fine. I think it annoyed them more than it annoyed anyone else.

Finally, the scientists dropped off as well. It was every person for themselves after that.

I sat with Jack and held his hand — it was scorching, but I didn’t let go until he stopped crying and dozed off — it took three days for him to die, but he never regained consciousness. I would have broken down by that point, I think, if it wasn’t for Michael.

They knew each other from before, Jack and Michael. Jack was a TA at the SEN school where Michael had been a student. He told me once that working with autistic kids was the closest he ever got to mindfulness. It was one of the things we had in common, why we clicked. We used to joke about how people like us wouldn’t be needed much longer, since it seemed as though all the neurotypicals were dying off and autism isn’t an issue if there isn’t a non-autistically structured society to fit into.

And maybe, we’d say, the world would even be a better place then.

We’d joke about that, but after a while we stopped laughing.

After Jack died, I was on the move with Michael for another four or five weeks, until finally one day he announced that he was tired of walking and wanted to stay where we were. It was a nice enough place. It had lots of trees and, like Michael, I’ve always felt at peace when I’m in nature. But the thought of staying put in one place kind of felt like giving up.

Michael wouldn’t be swayed though. He’d seen a squirrel.

I could have left him there and continued on my own, and I did think about it. But in the end I stayed to help him build a shelter, then I stayed to help him gather supplies and food, then I just stayed. I never made a conscious decision to stop walking, it was always more of a decision to delay my departure. I told myself I had to stay with Michael because he needed my help. But the truth is, Michael was fine without me.

I guess I was scared of being alone.

Michael barely talks and he’s not too happy listening either, but it’s still company.

We’re okay, all things considered. We’re safe and we have enough food to sustain us. We keep ourselves busy and Michael intermittently indulges my need for social interaction, so I don’t feel that lonely. Not as lonely as I would have felt if I’d left him anyway.

I get a bit restless sometimes, but at night I dream about space travel and sometimes about an old lady with black feathers in her hair, who speaks to me in riddles and caresses my cheek. I don’t believe it means anything, but I find it comforting all the same.

”Do you think there are any neurotypicals left in the world now?” I ask Michael, just to push the silence away from us for a bit, not really expecting him to answer.

”You’re still here”, he says, without looking up from his project.

He’s been gathering all sorts of supplies for this complex structure that he’s building, I think it’s supposed to be a solar panel, but I have no idea if it’s just a sculpture or if it’s meant to actually work.

It’s technically true, but Michael doesn’t need to know that and I don’t need him to know it either, so I don’t know why I said it.

”You’re not autistic”, he says with the exaggerated finality that he’s taken to use whenever he wants a conversation to be over, because he’s learned that anything phrased like a question will invite more talking.

”I’m not autistic”, I agree and, for some strange reason, I feel compelled to put a comforting hand on top of his arm, so I do.

He’s frowning at his construction now and I know he’s getting agitated.

”Sorry, I’ll let you concentrate”, I mumble and stand up.

”It’s fine”, he says with a dismissive headshake. ”You’re hot.”

I don’t know how to react or what the best response would be, so I just walk away without saying anything.

The sun is setting and the stars are coming out, so I make my way up to the top of the hill. It’s my favourite place now. I like to sit here and let my head fall back, and just disappear into that blanket of infinity. I count shooting stars to distract myself from the cold, or the crick that develops in my neck.

Maybe he didn’t mean anything by it, I tell myself. Michael blurts things out all the time, especially when he’s coerced into a conversation that he has no real interest in. He’ll state something obvious matter-of-factly, just for something to say.

So maybe he finds me attractive, it’s not the end of the world, I think. I shouldn’t make a big deal out of it. It’s not a big deal. I’m sure he didn’t mean anything by it.

When I get back, he’s got the fire going and is warming up some canned beans for our dinner. In the movies they always come across abandoned supermarkets and horde canned food, years after the apocalypse, and I always used to think how unrealistic is was that the food would still be good by that point. Even canned, it wouldn’t last for years.

When Michael hands me my can of beans, I twist it around and look for the best before date out of curiousity. Then I wish I hadn’t.

”You’re hot”, he says again and I sigh, getting ready to have the conversation, but before I can say anything, he shakes his head in that dismissive way again, and that’s when I realise he’s still frowning. ”I don’t mean that you’re pretty. You are. But that’s not what I mean.”

”Your body temperature. It’s gone up.”

His eyes flicker to my forehead as well, and his frown deepens. I think I can guess what he’s thinking, because he’s got that tired look in his eye that he gets when he thinks I’m being stupid. He doesn’t say anything about it though.

He doesn’t believe me, but he nods anyway.

The old lady with feathers in her hair starts showing up in my dreams more and more frequently and although I try not to read too much into it, I find myself taking more naps during the day just to get a glimpse of her lined face and feel her bony knuckles against my cheek.

When the nausea starts, Michael gives me a wide berth. But he never leaves me completely alone. I can feel his worried eyes on me constantly, whether I’m throwing up or not. He’s begun wringing his hands a lot, and whenever I put my hand to my mouth, he begins flapping both of his in agitation.

I try to reassure him that I’m fine, that it’s nothing. Even as I vomit bile into my designated sick bush, I shout I’m fine, it’s fine, I’m going to be fine, and I think the only reason he lets me get away with it, is because he’s realised it comforts me.

The weird thing is, I actually am fine. Besides throwing up in a bush at semi-regular intervals, my temperature doesn’t continue to climb beyond that initial spike and after a few weeks even the nausea stops.

It takes a few more weeks for me to realise what’s actually going on.

I’d dismissed the first missed period because it was just after Jack died and I’d figured the irregular diet combined with grief and not knowing what to do next would be enough to disrupt my cycle, and if anything I was glad not to have to worry about it for a while. The last thing you want when you’re struggling to survive an actual apocalypse, is to get an infection due to an unsanitary tampon.

Of course, by the time I was vomiting several times a day, I’d missed about three periods.

Michael looks genuinely horrified when I tell him. I half expect him to drive me away. Instead he pulls himself up to his full height and gives me a single nod of determination. He flaps his hands briefly. Then tells me, ”I take care of you, and I’ll take care of your baby too.”

I wonder how long he’s been thinking of this arrangement as him taking care of me, as opposed to the other way around — and how long that’s actually been true.

”Don’t worry”, he intones seriously and it makes me smile.

”I’m not worried”, I tell him, and feel the ghost of a caress brush against my cheek.

The next morning, I’m burning up.

Michael pushes me up to sitting and wedges me in the v of his legs and lets me lean back against his chest. I keep thinking he’s not comfortable with physical contact. It’s the only thing I can think about and I keep telling him that he doesn’t have to hold me, that I’m fine, but his arms are vice around my shivering body and the more I try to reassure him, the tighter he holds me; I feel a feathery touch of something against my cheek. My eyelids are too heavy now and everything is overexposed around me anyway, so I wouldn’t be able to make anything out even if I managed to keep them open, but I think Michael might have kissed me on the cheek.

Still, I think of bones and wrinkled skin.

I feel, more than hear, the words please don’t go, whispered into my hair.

More stories from Ida Thomasdotter and writers in Futurism and other communities.