by Landry Oliver about a month ago in fantasy

Never Judge a Book by Its Cover 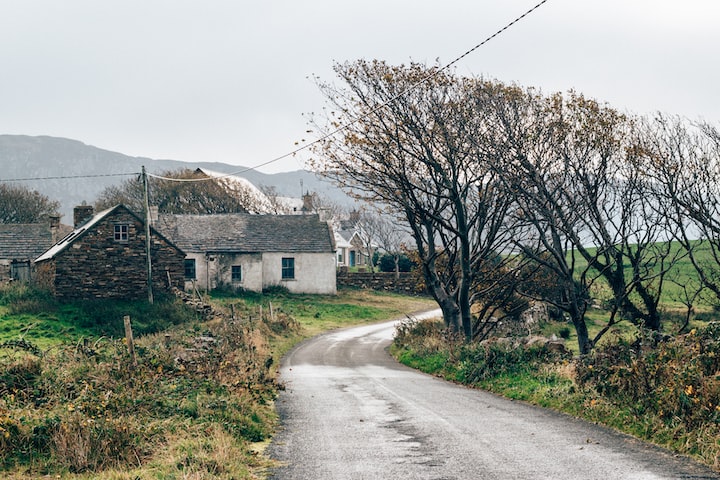 Photo by Dmitrij Paskevic on Unsplash

There once was a wee little town in Northern Scotland, and on the very edge of the town lived a rather rotund old man who was known and loved by all. He was a jolly fellow, from his frizzy red hair all the way down to his beloved pointy boots, which was not a long distance. The old man lived at one end of the long road that all of the town lived upon, for it was not a large town with many streets criss crossing here and there, but merely a collection of houses along a single strip. At the far end of the town was the home of the bookbinder, a dullard. The bookbinder had only recently appeared in the town, much to the surprise and consternation of the townspeople. After all, how many books could a small town possibly require?

Now it so happened that one day as the old man was waltzing around his garden, that he spied a rather fine black notebook in the street. He picked it up and, being a rather wise man - or so he thought - quickly came to the conclusion that the book had not been made by the bookbinder, a dullard, who no doubt could never craft such a fine quality item. He wondered to himself who the book might belong to, and decided that he, being a prestigious, upstanding citizen of the town, ought to find out who its owner was. Being such a fine book, it was clearly rather expensive, and ought to warrant quite a nice reward for its return. Thus, the old man proceeded down the road into town until he came upon his first neighbor, a beautiful young lady. At this point, the old man was out of breath; though the distance was not long, his short little legs were not used to such exercise. He took a moment to compose himself, patted down his frizzy hair, then knocked at the door. After a brief period, the door swung open and a dazzling young woman stood at the door. She wore a blouse and a pleated skirt of the finest quality, and towered comically over the old man. “Why, to what do I owe the pleasure?” The old man began to explain the situation, gesticulating wildly to emphasize his points as the young woman listened carefully. When he finally finished explaining, the young woman shook her head and replied “Why, that surely is such a fine book! It mustn’t have been made by the dullard bookbinder down the road, but I can’t say that I’ve ever seen it before. Perhaps I might come along with you to find its rightful owner.” The old man contemplated for a long minute, weighing the company of a beautiful woman against the likelihood of having to split any reward. The young woman smiled brightly and batted her eyelashes, the apparent value of the book had not gone unnoticed. The old man hesitated, and at that moment, a cacophony arose from the next house down the street. Flames shot out of the chimney, followed by the noise of several pieces of kitchenware being crashed together. The old man and the young woman turned towards the house just as a black cat shot out the door, down the path, and into the street, before turning and slowly walking down the road out of town. The old man shuddered, and turned back to the young woman. “Perhaps some company would not be entirely out of order”. He held out his arm, which she ignored, and they proceeded down the street.

By the time they arrived at the next house, the old man was significantly behind the younger, longer legged womanl, and attempting furtively to hide his lack of breath. From inside the house came muffled cackles and cries of glee, “magicked … thousand … straight from god himself!” They approached the door, and the old man looked at the young woman expectantly. She looked back, and for a minute they stood there in a battle of the wills, neither of them wished to knock. FInally, the young woman gathered up her courage, and rapped on the door, three sharp raps. As soon as her hand pulled away from the third rap, the door burst open, knocking the old man into the dust. An even older woman with matted grey hair stood at the door, her raggedy black dress hiked up to her knees. “Now what’s all this ruckus on my doorstep?” she demanded, her snaggled teeth glinting yellow in the morning sun. The old man gathered himself up, brushing off the dust, and shot a rather unkind look at the old woman. As he explained their visit, the old woman absentmindedly took a broom (seemingly appearing out of nowhere) and began sweeping the old man from head to toe, finishing with a rather thorough swat at the old man’s face. “Well, well, well. This can’t be the work of that dullard bookbinder, but I dare say it’s a rather fine book. You may need some help finding the owner, and I dare say I’m just the help you need” she crowed. The old man and the young woman protested, but before long, the three had set off to the next house.

The old woman walked surprisingly fast for her age, even faster than the young woman, so that by the time they arrived at the next house, both the old man and the young woman were panting. A similar occurrence happened at every house down the street, until eventually the whole town of nineteen men and women was walking down the road to the final house in the town, the bookbinder’s. As they approached, someone near the front of the crowd halted. “Now listen, we all know this book was not made by the dullard bookbinder. But being new to the town, he may not be as honest as all of us townsfolk, meaning he may claim that it is his work. Now, we ought not to even ask him, as chances are he will lie, and then we will all be out of our rightful rewards. So’s I say, we all turn around, and head back home. I’ll hold on to the book until we can find its rightful owner and dole out our rewards, hey?” At this, the crowd broke into ‘discussion’, with several ‘points’ being made to the jaw, rear end, and other sensitive areas of disagreeable townspeople. As the debate raged on among the townspeople, one of the more honest members of the crowd took the initiative and knocked on the door of the bookbinder (both the priest and the banker claimed that they were the one who knocked, although there is little evidence that either was telling the truth). The door crept open and a slim young man opened the door. All at once, the town began explaining why they were there, with each person shouting louder than the next, until the police chief shot his gun off. He later claimed it was on purpose, though others in the crowd seemed to believe otherwise. At this point, the mayor, being the most powerful in the crowd, seized upon his chance to appeal to the bookbinder, and explained the situation.

After a moment of silence, the bookbinder opened his mouth, “Why, yes, I did make this book. I sold it just this morning for one thousand dollars.”

The crowd devolved into chaos, with screaming accusations of lying, fraud, and even one claim of “heresy”. The bookbinder stood, considering the angry crowd, and after a lengthy period of being insulted, opened his mouth.

“Let me explain”, began the bookbinder, “I did not sell it for one thousand dollars because of its high quality. Rather, I sold it for such a high price because of the curse that was placed upon it. I could not bear the thought of it falling into the wrong hands, so I sold it to a man who destroys such objects”.

At this, the crowd once more began screaming as the townspeople came to the realization that they would soon deal with the effects of a curse. Eventually, the town’s doctor and the town’s scientist began to quiet everyone down, explaining that curses are not real, and that the bookbinder was surely lying, as predicted.

It was approximately noon, and the sun stood directly overhead. The air was becoming quite warm, and the townspeople were quite restless. The bookbinder, seeing that the town was once again back to insulting him, had retreated back into his home and closed the door. It was at that moment that the old man, being quite hot after spending the day keeping up with much taller and faster members of the town, suddenly fainted in the heat of the day. The doctor and the scientist could control the town no more, “The Curse! The Curse! He has been struck down by the curse!” they shrieked. The mayor began pounding on the door of the bookbinder. “Help us, we’re dying!” he sobbed. The bookbinder opened the door.

“Perhaps I can help you. It will not be easy, but I may be able to consult one of my books and offer a sacrifice to undo the curse.”

The townspeople were quite ready to agree to anything he might ask for, as they feared for their lives (though the doctor and the scientist both claim that they simply went along so as not to upset the crowd). The bookbinder disappeared into his home. Soon after, the young woman, filled with fear, collapsed next to the old man. Some fifteen minutes later, the bookbinder reappeared, with grave news. It seemed to him, after much consultation of his texts, that the curse, loathing to be undone, would require substantial sacrifice in order to undo the curse.

Everyone turned, yet not a single one rushed to catch the old woman as she collapsed into a dead faint. Very quickly, though reluctantly, each of the townspeople rushed home to gather up what little money they had on hand. They soon arrived back, with the mayor taking somewhat longer, having collected money from the homes of the three comatose neighbors. The bookbinder began counting the money, and finally reached nineteen thousand dollars, at which point the doctor, who was quite sure that he would require extra sacrifice for doubting the curse, coughed up an extra thousand, bringing the total sacrifice to twenty thousand dollars.

“As luck would have it, the universe loves an even twenty” proclaimed the bookbinder. “You may as well return to your homes, as I will have to work long and hard to try to overcome this curse which has been placed upon us.”

And so, the townspeople returned to their homes, while the three comatose patients were carried to the doctors house. None of the people ventured out of their homes for the rest of the night. In the morning, the old man, young woman, and old woman woke up, completely fine, save a nasty headache. The townspeople gathered on the road and proceeded together to the bookbinder’s house. They found the door open, and the house quite empty, other than a single scrap of paper which simply read “farewell”. It was quite apparent to the townspeople assembled that the bookbinder and all his belongings had been consumed in the sacrifice to the universe. They began to pay respects to the bookbinder, and a funeral was held the next week. The old man even went so far as to erect a statue of the young bookkeeper in front of his own home. To this day, you will never hear a member of that town call anyone a dullard, for they have learned their lesson.

As for the bookbinder …

Sometimes I amuse others in the process of amusing myself.

See all posts by Landry Oliver →