The Bittersweetness of Pyramid Level Z

by J. Otis Haas 3 months ago in science fiction

The lowest member of society searches for hope in the darkness. 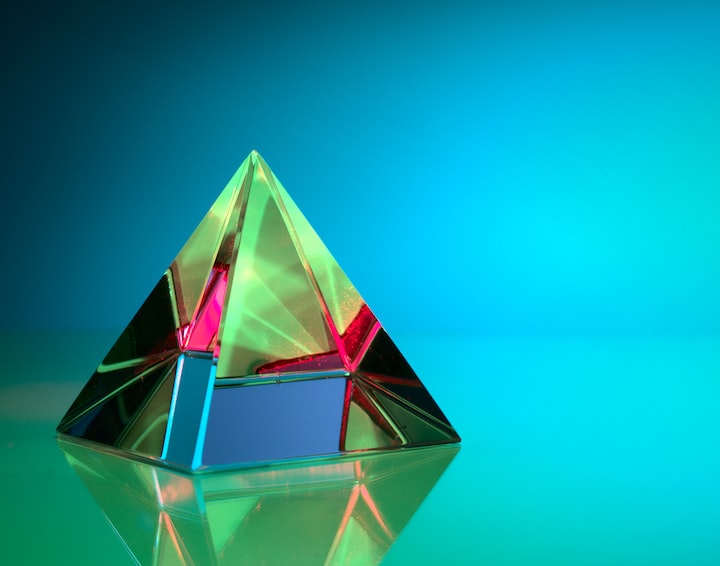 “Just tell us what you saw and you can have some cake,” Counselor Connolly repeated. Zygmunt Zysk stared at the slice of chocolate cake on the table between them. “Come on, Zyggy,” she said, using the kind of informal friendliness they used to get you to turn on others, to turn on yourself. “You know full well the whole Pyramid will crumble if we don’t all do our part,” now appealing to his patriotism and sense of civic duty. “Don’t you want some cake?” Zyggy realized this tactic might work. He also realized the cake might be poisoned.

The beige interrogation room was bathed in stark white light. The cake was so brown it looked black, with moist layers sandwiching striations of creamy dark chocolate pudding. All of it was covered with whipped frosting and dusted heavily with cocoa.

Based on what he knew now Zyggy suspected the cake was real. “There’s real food, Zyggy,” Zuzi would always say. “This right here? This is a load of crap!” She’d wave a protein bar in the air for emphasis while begrudgingly eating it. “What do you think these are made out of?” she’d asked once.

“Table scraps are recycled into food for all workers” he’d replied, parroting what The Supreme Leader always said.

“What table scraps?” Zuzi had howled, laughing while she swiped protein bar crumbs off the table onto the floor. Zyggy had thought about that for a moment. The only things that ever got Sent Up were the bodies of Level Z‘ers. He thought about how The Supreme Leader always said that “Worm protein is the fuel that powers The Pyramid” and “The Early Bird Gets the Worm.”

He thought about what the worms they ate must eat. Zuzi didn’t laugh when he asked about that. Zyggy had wished he could speak to The Supreme Leader. He thought about asking Counselor Connonly why everyone on Level Z was rail-thin, but she was fat. That was a bad idea, that was the kind of thing people got Sent Up for. Zyggy now knew the answer anyway.

Many of the screens on Level Z were broken but there were speakers everywhere broadcasting The Supreme Leader’s words. One had to go into the deepest, darkest drains to find a place free from that tinny voice, constantly reminding everyone that “We’re All in This Together” and with urgent reassurance insisting “We Must All Do Our Part” and “Your LifeTask is Our Mission.” They played music between speeches. Sometimes Zyggy and Zuzi danced in the drains. Sometimes they did other things.

Zyggy and Zuzi were in one of the deepest, darkest drains when they’d seen what they’d seen. “Do you hear that?” she’d asked. Zyggy had realized in an instant that he couldn’t hear The Supreme Leader or any music. They were deeper than anyone had ever been before. He had heard peeping.

“What did you see, Zyggy?” the Counselor asked again. Zyggy felt lightheaded. “You’re slightly malnourished. Have you been eating your protein bars? They’re the fuel that runs The Pyramid. Let the vitamins we gave you do their work.” They had jabbed him with a needle when he came through the door. “Vitamins,” someone had mumbled. Zyggy felt hot. The biometric sensors adhered to his skin began to itch. He could smell the cake.

Bittersweet. That was the only word for that smell, for that taste. He knew the meaning both figuratively and literally. Back in the early 500’s, when Zyggy had been a little boy, times had been marginally better and occasionally something other than protein bars would come down the chutes. Usually it was chalky, barely sweet shortbread, but there were gumdrops and, rarely, chocolate. Perennially last in line, Zygmunt Zysk usually had to resort to licking the package the sweets had come in for the last of the last crumbs or smears of sweetness or crunchy grains of sugar.

They were supposed to send enough rations for everyone, but the children at the front of the line who got first dibs always took more than to what they were fairly entitled. The day Zuzi had shared her chocolate Zyggy remembered seeing Zachary Zamboni with three bars in his hands. Now twenty cycles later Zachary Zamboni was their Level Leader.

They had been five that day, and for no reason he’d been able to discern at the time, Zuzi had handed him a bit of chocolate. She was far enough back in the line that she was lucky to get the half bar she had. “I have a half,” she’d told him. “You can have half of my half,” she’d said, breaking the piece in two. So that’s what bittersweet tastes like.

When they were in their early teens he had finally asked her why, with the strict hierarchy of alphabetization ruling every aspect of their lives, with the Supreme Leader and those on Level A making decisions for all the Levels beneath until they worst of it all filtered and dripped and seeped down, below the scrubbers, below the hydro-tanks, below the generators, below the morgue, below the worm farms, below the digesters, below the sewers, all the way down to Level Z, where everyone’s LifeTask was to push the thick black, oily ooze, that unreclaimable, unrecyclable, cannot-be-processed-into-anything-useful final runoff of society down the deepest drains in The Pyramid to be finally expelled out of all sight into the burning wasteland Outside, what, in her five year old brain had compelled her to share her chocolate with him?

Zuzi Zizz was far enough back in the line that, to this day, more often than not she got meager rations and rarely sweets (not that there’d been any sweets in over a decade) but she was better off than Zuzi Zyzz, another crumb-licker like Zyggy. Names were assigned algorithmically at PseudoBirth, your name determining your Level and your place in line forever. It was supposed to be random, but, like many things in The Pyramid, it seemed to be anything but.

“You looked like you needed it more than I did,” she’d said. That was the day she’d come running into the drain he’d been clearing, crying that she was dying and knocked into him hard enough to send his SqueegeeBroom into the ankle-deep muck he’d been pushing. He’d ignored the handle sinking under the tarry surface and focused his headlamp on her face. She was filthy, they were all always filthy on Level Z, but her tears had cut clean lines through the grime. She showed him the blood on her hands and where it had come from.

People talk, they always did. Zuzi had heard rumors of real food somewhere, Zyggy had heard rumors about other things somewhere else. Everyone on Level Z was supposed to be sterile, that was by design. Zyggy knew what that blood meant. They’d laughed about it later and had always kept it a secret, it was the kind of thing that would get one or both of them Sent Up. Staring into Counselor Connelly’s jowly face Zyggy realized that as of today they had another secret. That made three. “What did you see?” she asked again.

Zyggy knew what they had seen and he knew that Zuzi was in a similar room being asked similar questions by a similar someone. He wondered what they’d tempted her with. He wondered what she’d told them about what they’d seen when red light had begun to illuminate the drain they’d been in earlier. Neither one of them had ever been so deep.

Usually they just pushed the sludge towards grates with holes too small to squeeze through, locked by locks with long lost keys, but one of the Digesters above had acted up recently and the drains on one side of The Pyramid had been operating at beyond capacity. They’d been pulling double shifts (with no additional rations) for days, but things were finally draining smoothly. They were deep and dirty when Zuzi had pointed out that one of the grates had broken free under the pressure before darting down the newly accessible drain. Zuzi was as adventurous as one could be on Level Z with all the crushing weight of everything above. Zuzi had shown Zyggy many new things in their limited world.

They’d heard the peeping before they saw the red light. The drain sloped down and Zyggy saw it reflected on the black sludge before seeing it spill up the rounded sides of the drain. He panicked, thinking it was The Fires burning in the poisonous air Outside, the whole reason humans had built The Pyramid, to wait the thousands of years needed for the Earth to be habitable again, but Zuzi said it was The Sun.

The word had no meaning when she said it. Sun, ghost, soul, these were abstract concepts, not really real things. You couldn’t see your soul, no one had ever seen The Sun, but she was right. They looked through the final grate at The Outside for the first time. The Sun was rising over a mountain range. In the breaking dawn they could see rivulets of black sludge running from the base of the next mountain over joining the rivulets from their mountain and the others around them draining into an oily, murky river that flowed slowly across the valley floor.

In the early light high up the slopes they could see neat rows of crops and people walking among them. Mist rose from irrigators and mixed with the clouds above figures, here and there in the distance, leading animals to steep grassy fields.

“I told you,” said Zuzi and Zyggy wrapped his arms around her, clasping her belly. That was their other secret.

The peeping sound had come from a bird’s nest delicately built high up on the final grate, a jumble of sticks and grass set out of the wind and weather. The three chicks must have hatched that morning, blind, leathery things, noisily waiting among broken shells for a parent to return with their first meal. “The Early Bird Gets the Worm” indeed. Zyggy finally understood.

Suddenly Zuzi was trying to break the lock off the grate with her SqueegeeBroom. The latch bent but the broom gave way first, folding over on itself, sending Zuzi stumbling. “You’ll have to requisition a new one,” Zyggy heard himself say. She glared at him and growled and next bent his broom against the latch. It gave more, but would not break. “Careful, the birds,” Zyggy said.

“We’ll get more brooms and come back right away,” she said, panting, pressing a hand to her stomach. “We can’t tell anyone about this.” Zyggy turned as they rushed back up the tunnel and saw the mother bird perched on the nest, regarding them with a worm in her mouth.

“What did you see, Zygmunt? Tell me now!” Counselor Connelly barked. Zyggy stared at the cake. All he could see was the look on Zuzi’s face as they were pulled apart.

“What else?” the Counselor demanded.

“The Sun,” Zyggy had tears streaming down his face.

“Outside! I saw Outside!” Zyggy bawled.

The cake was real and as bittersweet as he knew it would be. There was still frosting on Zyggy’s lips when he was Sent Up.