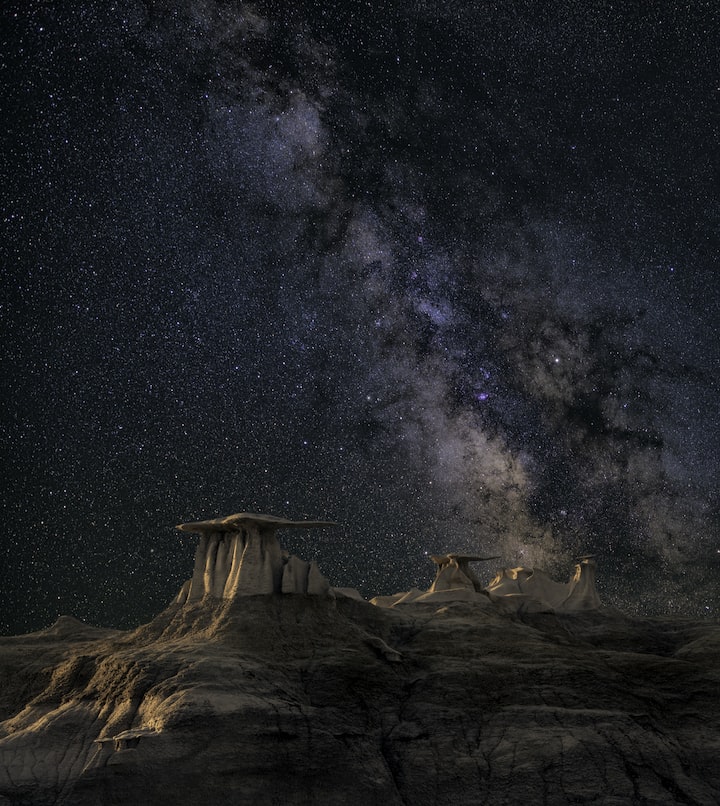 Photo by John Fowler on Unsplash

The alluring light of a nearby star captivated both man and machine. The astronaut and his companion looked on from the flight deck of their small spacecraft. They looked on as prominences reacted to each other across the sun, setting off radiant explosions of energy. The craft sat well outside the reach of any radioactive debris from the solar flare event. From this safe distance, the chaos of nature could be appreciated. As the solar arches danced beautifully before them, the astronaut opted to delay the craft’s launch time until the eruptions ceased.

The astronaut turned to his ageless co-pilot, a humanoid robotic creation; a true culmination of human ingenuity.

“What do you see?” The man turned his head slightly and asked the machine.

“More than you,” it answered. The astronaut grinned and shifted his gaze back to the sun.

“You can see the Sun in all its glory. Every layer of chaotic beauty is seen by your so-called eyes. I am well aware that you see more than me. But, you will never see beyond.”

Breaking his gaze once more, the astronaut looked down at his suit. The helmet he wore limited his visibility. He pressed a gloved hand against his left breast. His fingers felt for the zippered edge of a custom pocket placed there. He convinced one of the suit’s designers to add it. She was against the request at first, stating, “It could damage the integrity of the suit.” The astronaut frowned at this and responded, “If you and your team found a way to design a nearly indestructible uniform able to withstand almost anything space can throw at it, I think you can figure out a way to throw on a pocket. Glue it on, for all I care.” A few days later, the suit was returned with a pocket seamlessly added over the left breast. And it was bright pink.

“Alert me when it is safe to proceed with our mission. I need to get something from my quarters.”

The astronaut left the darkness of the bridge. The light on the other side washed over him. As his helmet retracted into his suit, he stopped for a few seconds to let his eyes adjust. The passageway before him was a long tunnel of white light. Sharp, gray metal protruded vertically from the white bulkhead every few feet. The astronaut’s covered hand brushed against each bar as he slowly made his way to the end of the passageway to his quarters.

It was a relatively short distance. The spacecraft was small; built for one human and one android. The largest space on the craft contained a horizontal cryotank, six feet in length; a frozen coffin ready to take in the astronaut for his long slumber. However, for the next week, the astronaut would sleep in a smaller space. One with a bed, a desk, and a view of the outer environment. The astronaut would come to prefer these sleeping quarters. The doors closed behind him as he entered the small space. On the desk lay a folded paper. He walked over and placed two fingers on it.

“Why did you want this added,” the designer asked him after returning the suit. He couldn’t remember his exact answer. It was simple, though. He told her it was a memento of the past. He kept his fingers pressed against the folded paper. He raised his other hand to catch the material as he slid it off the edge of the desk. The astronaut carefully secured it in his bright, pink pocket, and then walked over to the bed. The small cot he slept on was pushed up against the viewing screen. Outside, three aging space stations orbited the dead planet once known as Earth.

Over 2.5 billion human survivors occupied the interior of the three massive space stations. Built near the end of the 22nd century, these megastructures were nearing the end of their life span, almost three hundred years later. The last remnants of mankind launched from the surface of the Earth fifteen years prior, when it was no longer sustainable for any living creature. The planet below no longer resembled the blue and green marble it had once been. The diverse ecosystems of the Earth gave way to a scorched, barren landscape. War ravaged the planet, stripping it of its habitability.

The astronaut, a survivor of a failed first attempt to transfer the last humans to one of the stations, looked on with indifference at the scene outside his spacecraft. Two of the three space stations were visibly rotating against the backdrop of the dead planet. A small fleet of cargo ships coming from the lunar forward base crawled across the vacuumed expanse of space towards the third space station that loomed below. The screen wavered and returned a grainy image of the flight deck. The robot swiveled back towards the camera. “Ten minutes to launch, big boss,” it chirped. It raised a robotic thumbs up before cutting the transmission and restoring the external image. The man returned to the darkness of the bridge.

“Ready?” asked the robot of his human counterpart, as he slumped back into his seat.

“We’re never coming back to the way things are now. Everyone here will be dead when we complete our mission. I don’t know how to feel about that.”

Unable to show real sympathy, the machine raised a thumb at his partner and said, “At least, you’ll have me.”

“Comforting,” the man retorted. He secured himself to his seat and began yelling out departure orders to the ship’s computers. The main engine hummed to life and the view of Earth’s sun began to slowly shift to a dark, vast, open space. A panel in front of the astronaut lit up with a countdown. He repeated the number to his co-pilot before confirming with the ship’s computers of the hour-long timeline. The spacecraft would maintain its current speed before shifting to a warp drive. At that point, the main computer would take over piloting duties while man and machine prepared for a hundred year voyage in cryostasis.

Almost a year earlier, and after thousands of years of cosmic silence from the universe, one of the space stations received a very peculiar radio transmission. The recording was played over and over again as the last remaining humans of Earth scrambled to decipher its meaning. The message was clear yet it was difficult for humans to accept. More perplexing than the origin of the transmission, which came from a neighboring dwarf galaxy, was the very clear message. The message was: “Help me.”

Any manned mission that went outside of the solar system was accounted for within each space stations’ databases. The furthest any human traveled was to a satellite colony based on Jupiter’s moon, Ganymede. For a message in a human language to come from outside of the galaxy, it meant the possible discovery of life in the universe. Whether it was alien or human, the decision was made to send out a recovery crew to the point of origin. But, only one ship remained in mankind’s space fleet capable of making the voyage. And only one astronaut was willing to make a trip into the unknown.