by Emily LeClaire 8 months ago in fantasy 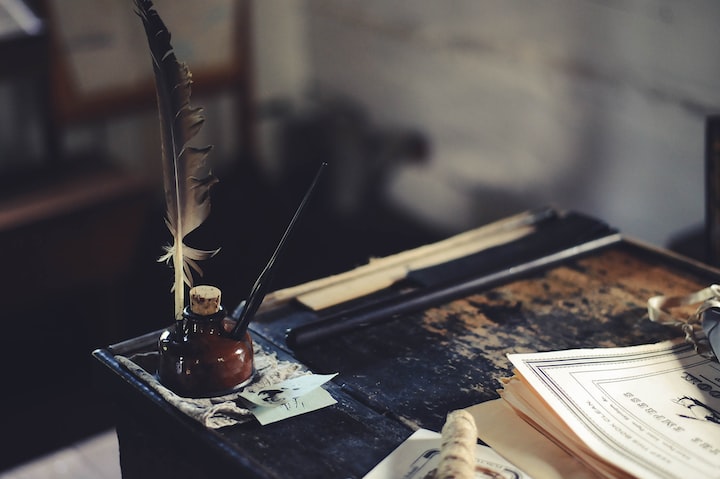 Photo by Clark Young on Unsplash

It's strange how a little thing can alter one's entire life. Missing a flight, arriving early to work, spilling your coffee, or checking the mail. As a detective, I've seen first-hand the all too real consequences to seemingly mundane events. It should be of little surprise that one such event changed everything for me, but some things surprise even the most astute observers.

I'd received the letter under stranger than usual circumstances. No stamp. No return address. Merely: Detective Wendell Adams, scrawled out in thick black marker. It was obvious someone had hand-delivered it, and that peaked my curiosity. Out of an abundance of caution, however, I took the time to don a pair of gloves before opening it. They say curiosity killed the cat, but luckily, I was unharmed. The letter read as follows:

Greetings. You have just opened the key to a door that, once unlocked, will change the course of your life.

I represent an agency that recruits remarkable people with certain desirable skills. You, I'm proud to say, possess these skills in spades. We're prepared to offer you a position immediately. Enclosed, please find 20,000 dollars in cash. Consider this a sign-on bonus, or good will gesture of sorts.

The position we're offering to you is dangerous, but lucrative. I cannot, for security reasons, go into the details of your duties. Let it suffice to say that you will be fighting against the worst sort of criminals, much as you do now.

This invitation likely seems out of the blue to you, but rest assured, you've been carefully vetted over the past several months. Besides your qualifications, which I won't specify, we know just about everything about you. You are 34 years old, a widower these last 2 years. You have no children, no living parents, and no siblings on record. More personally, you've recently been ill. You have been experiencing nausea, headaches, fever, chills, increased hunger and thirst, severe abdominal cramps. And worse, you've heard voices and seen things you can't be sure are real.

How do I know this? Though I can't get into it now, it will be explained in due time. This isn't just a career opportunity for you, but a matter of your own health and safety. It would be advisable for you to agree to a meeting. Friday morning, when you leave for work, leave your porch light on if you agree to meet. If not, leave the light off, and we'll leave you in peace.

Hoping to see you soon,

20,000 dollars was a lot of money, though the other parts of the letter left seeds of concern in my mind. What kind of legitimate organization would just hand over that kind of money to a "recruit" with no commitment? It was clear this Amber person had been following me. Even so, she indicated knowing things I hadn't told a soul. Since I started feeling sick a few weeks ago, I hadn't missed a single day of work. Heck, I didn't even complain to anyone.

Again, curiosity was a siren in my ear, and I went along with her. Whatever the cost. Friday morning, I left the porch light on and locked the door behind me. That evening, I returned home, feeling eyes upon me as I made my way into the dark living room.

"Hello", came a smooth, feminine voice. "Please, have a seat." As she spoke again, I discerned she sat in my easy chair. "I'm Amber, your Agency Liaison."

Feeling safe with my sidearm in place, I sat down across from her. "Agency?", I inquired, "Are you government?" I reached to turn on the table lamp between us. In the soft light, Amber was beautiful, but severe. She wore a black, professional suit and there was a coldness about her that left me uneasy but intrigued.

"Hardly", she smirked, "I represent The Agency. We've spent a lot of time recruiting you. I would love to sit around and chat, but I've been instructed to take you to a safe house to review our offer."

Thinking of the mysterious "sign-on bonus", I spoke with subtle sarcasm, "What if I take the money and run?"

"That would not be advised", Amber sighed with nonchalance.

For some reason, paired with insanity or stupidity, I found myself following Amber outside. I took note of the sky. The full moon bathing the street in a blanket of light was awe-inspiring. A chill in the air, I zipped my jacket and shoved my hands in the pockets. As we walked, I realized she'd parked a couple blocks away, and began looking for any possible accomplices. I saw nothing, and heard no one, but was not put at ease.

After a tense 20 minute drive, we arrived at the safe house. I'd recorded each turn in my mind, so I could find my way home if needed. The safe house was far from the shack I'd imagined. It was a grandiose cabin. Private and serene, it reminded me of the home my wife had always dreamed of. I had to swallow my sorrow at the thought of her.

As I expected, a large man stood as sentry outside. Only one road access in and out. Thick woods on all sides, with no visible trails. If I had to flee on foot, it would be no easy task, assuming the lone sentry didn't represent their full force. However, as Amber led me through the cabin, I sensed it was just the three of us. She showed me into a well-decorated office, and I was relieved to see a private balcony. She gestured to an ornate desk, atop which, rested a small leather-bound black book. The gold lettering on the cover simply read The Agency.

"Wendell, this is our agency manual. Read the introduction, and call me when you've finished so I can answer any questions you may have." With that she quit the room.

I sat behind the desk, unmoving, knowing intuitively that whatever information the manual contained could alter my reality indefinitely. As I looked at the little black book, I felt an energy exude from it. A fierce, ancient energy, the likes of which I'd only heard described. Opening the book, I read:

Welcome to The Agency. We are not attached to any government or nation, though we have worked with them in the past. We've been in existence for around 1300 years, remaining a powerful secret organization. You'll soon notice that many members come from military or law enforcement backgrounds. Our work often requires similar training.

We are an elite clan of non-humans dedicated to fighting against the dark forces that wish to overwhelm the good in our world. You read that correctly: non-humans. More specifically, the recognizable term would be vampires. Much of the folklore and legend surrounding vampires doesn't apply to us. We are not the enemy. We do drink blood to survive, but only on the full moon, and we do not kill. (You can continue to eat and drink as you always have, though caffeine and alcohol have little effect on us and starches don't sit well with most of us.) You are not undead, you are alive. If you choose to complete the Blood-Share ceremony, you will feel more alive than ever before.

We use our honed skills to fight against rogue vampires who kill often and without regard. There are many of them, and as we recently discovered, far too few of us. We have been recruiting potential members since 1741, but only come across a few worthy recruits in a decade. We provide unique training and resources to our members, along with generous compensation.

Obscurity is the only real consequence to joining The Agency. You must go completely off-grid. You likely have no close ties documented to hold you back, and should find it easy enough to assimilate to our protocol. We ask of you only what we've all already done.

Unreal. I actually laughed out loud. "Amber! Oh, Amber! Come here!", I called in between fits of laughter. "Come quick, Queen of Darkness! I want to be a vampire secret agent!" I continued to laugh as I heard her approach.

Amber gave me a weary look, "Do you really find it so amusing?" I only continued to giggle, knowing I must look like a buffoon .

"Not a bit", I said, regaining composure, "But I do appreciate the free trip to Crazy Town."

A smile played at the edge of Amber's crimson lips as she approached. There are so many who don't believe in the beginning. I was one of them, but most just need a little push. I heard her speak as clear as day, though her mouth remained unchanged. She stood less than an arm's length from me. Do you need a little push? Her laughter echoed in my mind, making me shiver. Her smile broadened as she grabbed me by the neck and lifted me off the ground with such force that my feet dangled nearly a foot above the floor. Struggling to breathe, I felt a trickle of blood run down my throat as she bared her fangs with a hiss.

"You read the introduction. I'm a vampire. You've been recruited." It was a simple explanation in her eyes. "If you agree to join The Agency, you'll advance from a half vampire to a full one", she said as she collected my blood in a small glass container.

"How am I half, now?", I asked paying her actions little mind.

"I sampled your blood, as part of the recruitment process. It starts the transformation. On the full moon that follows, the blood-share ceremony must be completed. If not, you return to your human form." , she explained.

I was aghast, "Tonight is the full moon. So, I need to choose tonight? That's what you're saying?!"

"Yes", Amber began, "I know it's not easy", she said as she withdrew a quill and a thick, cream-colored envelope from the desk drawer. She set down the glass ink well containing my blood, and opened the manual to the final page. "Your fate is now in your hands. To continue, just sign here." She looked at me expectantly.

"I can't believe this", I said slowly, though the reality was hard to argue. I'd seen with my own eyes. "I suppose, what have I got to lose?" I signed mechanically, then looked to Amber for instruction.

She pulled a small flask from her sleeve, "Drink this to complete the Blood-Share".

"Of course it's blood, and it is mine. But it doesn't taste to us as it does to humans. Just drink.", Amber ordered, gently.

Here goes nothing. Taking the flask, I downed it all too quickly, and to my surprise it was tantalizing. I started to tell Amber as much when I felt a sudden heaviness and everything went dark.

I awoke to the sting of the sun in my eyes. "What time is it?", I groaned aloud, as I faced the clock. 10:00! I checked my phone to see I had several missed calls from work, but I got no answer when I dialed back. I couldn't shake the fog from my brain, so I made my way to the bathroom. Stumbling into the shower, I stood, letting the hot water cascade around me for an undeterminable amount of time.

Still exhausted, I returned to bed, wondering how I got home last night, as I had no recollection of what happened after work. I fell asleep quickly, waking up just after sunset.

Rolling to turn on my bedside lamp, I froze as the illumination dazzled over gold lettering on a little black book. I reached for it, recognition finally sinking in. Underneath was a thick, cream-colored envelope that read: