by Will Stape 6 months ago in star trek

Star Trek: The Next Generation warps a careful path through complex challenges of overwhelming artificial intelligence. Indeed. If Captain Jean-Luc Picard learned one important thing from his Starfleet Academy training—or by reading Captain’s Logs of his predecessor, James T. Kirk—it’s the subtle intricacies of effectively dealing with synthetic smarts.

From an android sibling intent on becoming an only child to a galactic rampaging force chock full of irresistible cyborg perfection, here are the top three A.I. threats confronting Picard’s Enterprise D crew. 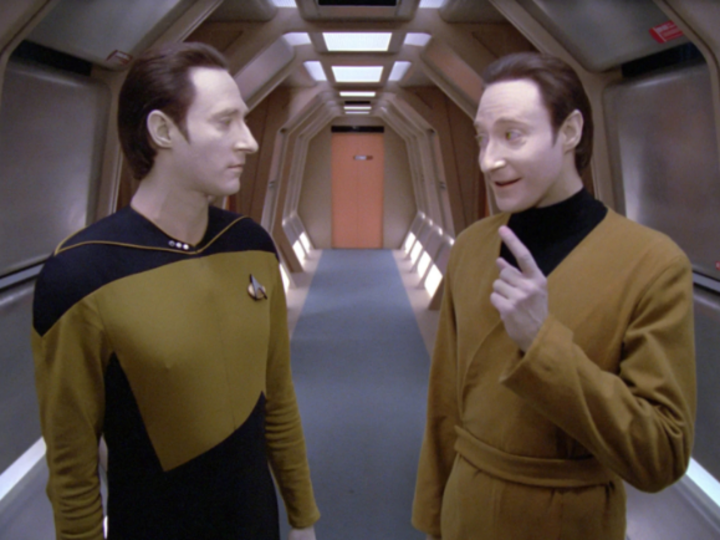 You know I'm the handsome one, right brother?

Data may impress us as a super strong, super smart, and super loquacious android—but he's not unique. He wasn’t the first to be crafted by genius cybernetic creator Dr. Noonian Soong.

O yes, my eternally curious reader. There was another BEFORE Data.

No, not B4, the mentally challenged cyber simpleton seen in Star Trek: Nemesis. Lore, as he’s called, was the first go round at recreating a human like machine. Soong succeeded so well in producing Lore, he chose to shut him down and bring Data on line. Why? Lore became too human for the colony in which they shared their residence. The colonists were frightened and even felt threatened by him.

Similar to classic sitcom fun such as Bewitched and I Dream Of Jeannie where Samantha and Jeannie played their evil relatives, Brent Spiner slips into the predatory persona of his treacherous brother in the episode—and also in subsequent outings, Brothers and Descent. Spiner actually suggested the Lore premise to the TNG producers.

In the upcoming Star Trek: Picard—streaming on CBS All Access—it's possible we may encounter Lore again. Last we saw, he tried taking over the Borg collective as a charismatic leader, only to be deactivated by Data. Since Picard appears preoccupied with Borg themes, Lore could be called on in some capacity. Who knows, The Sons Of Soong may rise once more.

Does a green light mean we jump into warp?

"You will all become one with the Borg!" says Locutus (Patrick Stewart) but that was before this little nifty TNG romp from the 2nd season.

Technology associated with the darkness of the Borg is strikingly seductive. Upon recruitment—voluntarily or not—an individual is given new, synthetic limbs—albeit at cost of sacrificing his or her own natural ones—which are stronger, faster and probably last longer than ones received at birth. Enhanced senses such as sight, hearing and reaction time allow Borg drones to perform feats humans can only dream about.

Unlike run of the mill A.I. Borg fascinate as a super race of cyborgs - biological entities who use implanted devices connecting them in unison to an enormous hive like super brain. Drones are never alone, their thoughts shared with billions of other members all over the galaxy.

Q, played by actor John de Lancie, that infinitely mischievous alien being, decides if he can’t become a proper member of Picard’s crew, he’ll introduce them to the Borg. It’s an introduction fraught with chaos right from the start. Those infamous assimilators would later appear in many more Treks and feature in the movie, Star Trek: First Contact—giving us their supremely seductive leader, the Borg Queen, played by Alice Krige. 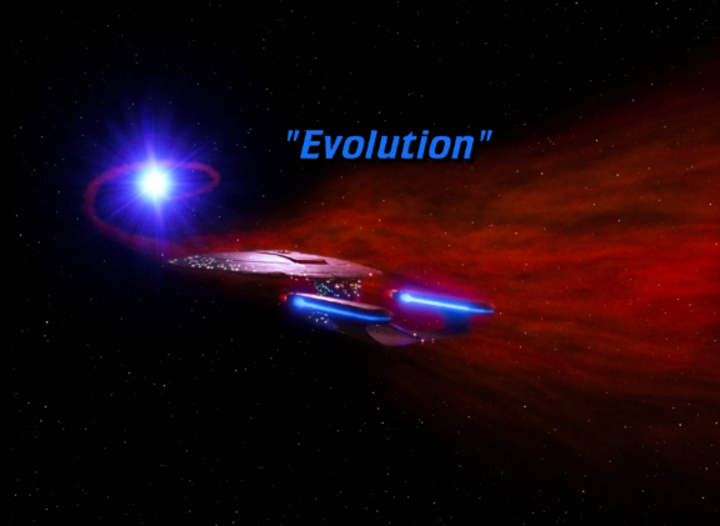 Nanotechnology concerns the building and programming of incredibly tiny machines or manipulation of nano materials—right down to a microscopic level. These tiny bots could one day boast the awesome capability to repair human organs by working on our bodies at a cellular level. Massive quantities could scrub clean our polluted oceans or to help lessen health dangers of toxic spills or even negate radioactive fallout in nuclear accidents.

In the Star Trek universe, these micro-machines not only exist, they can do a host of amazing things, including wreak havoc on unsuspecting starships.

Wesley Crusher (Wil Wheaton) who usually struts around as boy genius saving the day, accidentally lets these powerful A.I. bots loose on Picard’s starship and they evolve beyond what they were. They soon interfere with Enterprise’s systems and violently target a visiting scientist for revenge—after he destroys many of their kind with radiation bursts.

The Next Generation covered many a sci-fi topic over its seven season run. This memorable episode gives us a fictional sense of what it may be like if our own tech suddenly starts complaining—or worse—even sabotaging devices to do us harm or seek vengeance. Can tech devices like Siri or Amazon Echo Alexa evolve beyond a programmed matrix? Completely far fetched? Maybe. However, some computer scientists propose A.I. can become so complex that its motives would barely be understood by its own murky algorithms—let alone the less mentally nimble species who spawned its preeminence.

star trek
Will Stape
Read next: Understanding the Collective Intelligence of Pro-opinion
Will Stape