by MealyGarage about a month ago in science fiction

(or Never Judge A Book) 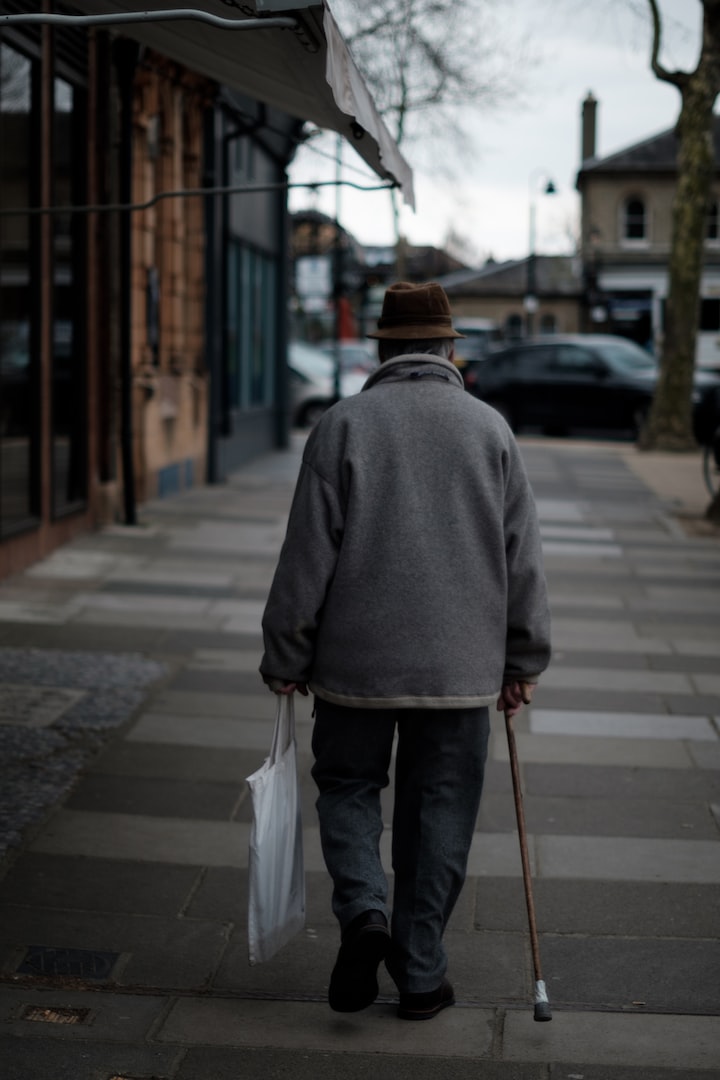 Photo by David Sinclair on Unsplash

He steps out of the house, mindful of the crumbling front step that cost him a week’s stay in hospital last winter. He ought to get the thing fixed but he hasn’t got the money to pay for some cowboy who would only make it worse. If the thing eroded even more he could always start using the back door, but that would mean being under the nosy gaze of the old trout across the way who sits perpetually in her living room, staring out of the window at everyone and everything. Still, he could always raise his middle finger to her; give her something to gossip to her equally prying friends with. And he’d get a chuckle from it, to see how flustered and offended she’d get.

As he sets off down the uneven path, he takes in the unkempt lawn that he’s given up tending to himself. His bones and joints complain when he has to bend or kneel anyway, and the last time he was in the garden, doing a spot of weeding, his back had went. Half an hour he’d stayed there, in extraordinary pain, frozen like a rotting statue, before someone - an old dear out walking her dog - passed by and helped him back into the house. The dog, some cross-breeded monstrosity, had kept at his feet and let out a constant bark. If the man had had any strength left in him at that point he would have gladly kicked the mutt into silence. The woman had been very apologetic about the dog but the man had waved away her words. She’d got him into his armchair and started fussing around him: ‘Do you want to go to hospital?’ ‘Shall I phone the doctor?’. He had said no to both and told her he’d be fine, now, stopping short of asking her if she wanted a cup of tea. He’d wanted rid of her - and that ugly beast - as soon as he’d sat down. She’d finally taken the hint and soon left. Since then he’d catch sight of her walking along the road with the dog, but he’d always make sure he was out of sight in case she saw him and stopped to chat. Some people think that by doing a good deed for someone automatically gives them the right to invade their lives. No thank you.

Now on the pavement the man leans heavily on the walking stick in his grip as he approaches the centre of town. Cars and vans hurry along the road, churning out fumes and noise as they pass by. One of them has a radio on and something the man assumes is trying to pass itself off as music blares out from the open windows.

One of the many charity shops that have sprung up in the town centre recently comes into view but the old man passes it without even glancing in the display window. He doesn’t have to. He knows it will be full of horrid-looking outfits, video cassettes and no one wants or needs, and books by scottish crime writers. Instead, he gets to the zebra crossing and, deliberately taking his time, moves slowly across the road, almost smiling at the impatient faces of the drivers who have had to stop to let him by.

He finds himself outside the cafe he used to frequent every day for a plate of bacon, eggs and beans washed down with a cuppa. That was before the place was taken over by some hoity-toity couple and turned into a small gallery-cum-cafe. The fry-ups had been replaced by pastas and salads and low-fat treats. The clientele now consisted of middle-class mothers, well-off pensioners and tourists. People like the old man with their purses of copper and shrapnel were no longer wanted.

The old man keeps going until he reaches the path that leads him down to the river. His legs begin to tire a little but the sun is making one of its rare appearances and he can do with the fresh air, so he carries on.

When he gets to the riverside, the sole bench in the area is occupied. A group of young lads, dressed in school uniform, sit smoking roll-ups and sip from a solitary beer can that's being shared among them. One of the boys sees the old man and mutters to his mates. Then all five turn and look at the newcomer. The old man stares back, never breaking his step as he follows the path past them. And then, as if there had been no one there in the first place, the lads return to their fags and booze. The old man feels a twinge of sadness at this display of apathy. So he isn't even of interest to a group of skiving kids now? No insults to hurl at him? No attempts at nicking his walking stick? Kids, these days. You just can't trust them to be unruly young thugs, anymore. How disappointing.

Eventually, the old man comes to a stop, well out of sight of the young lads. The water here is shallow and he can make out the large rocks lying on the riverbed. A sole bird is tweeting incessantly somewhere, its shrill cries like an alarm clock going off on a Monday morning. The old man ignores the bird and stares at the water glistening within the gaze of the sun. He can feel every ache, every pain in this old, decrepit, ageing body and knows his time will be up soon.

He can't quite remember which body this is. He lost count after it went to three digits, and that was a while ago. But keeping count is futile, really, when his punishment is eternal.

And it had been a fitting punishment, too. That’s what they’d said at the trial. For all the billions of lives he had caused such misery and suffering, he was going to live such misery and suffering, in return. Over and over and over again. One of the judges had come up with the idea that since the old man had such a love of the number five - five armies, five wives, five mistresses, five palaces and five pleasure planets of his own - he was to spend five Earth years in a body; an old, sore, failing body until the point of death where he would be transferred into another old, sore, failing body.

Two bodies ago had been the worst. He had found himself in the body of a ninety-one year old woman living in a catatonic state in an old folk’s home in Ireland. He had been driven near mad by the inability to communicate with anyone, to have to sit in his - her? - own piss until one of the useless members of staff realised what that funny smell was. Mind you, the things the staff would chat about when they thought old Annie couldn’t hear them had been entertaining. The way they’d speak about the other care home residents almost made him feel sorry for his fellow inmates.

When the old man turns to go home, his mind briefly - and not for the first time - touches on whether the people, whose bodies he inhabits for half a decade at a time, had existed before, or whether they were conjured up by his enemies. And if they had pre-existed, where did they go when the old man took charge?

He walks back the way he came. Past the boozing boys, past the posh cafe - whose idea of art looks worse than the contents of an unflushed toilet - back along the zebra crossing at a snail’s pace, past the charity shop and its predictable contents, up the garden path and in through the back door, ignored by everyone apart from the old trout staring at him from beyond her living room window.

As the old man turns to close the door behind him, he catches the woman’s eye and, wearing an innocent smile, slowly raises his middle finger. Her reaction has him chuckling for days.

See all posts by MealyGarage →