by Zay Keyz about a year ago in science fiction 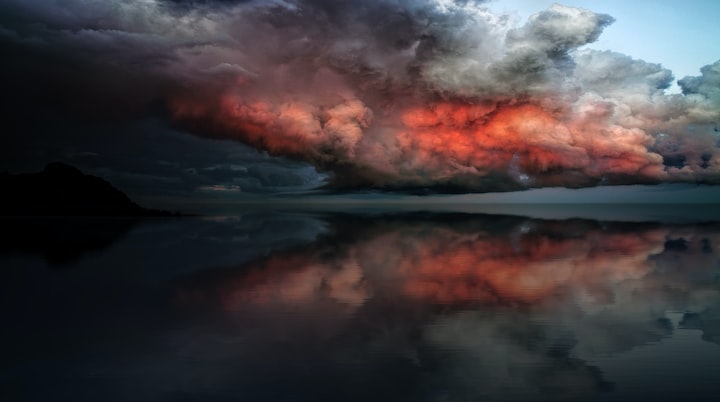 Thunder crashed and rang through the alleys and streets of Hue Falls. It was a rare rainless storm but a loud one nonetheless. At 2 hours past moonnight , the year of 2145, the little town of Hue Falls lay silent. Unusual for a town of endless noise and bustle but something about tonight was different. It was as if by magic that the town lay so silent – perhaps for its own good.

In a nearby forest north of the town the clouds began to swirl in a clockwise turn and the air began to move and thicken. The rich foliage began to sway back and forth in the winds as they began picking up. The clouds above gave a roll of thunder and electricity began to circle in the opposite direction of the clouds. This was no average storm and you could see the power in the town below begin to flicker.

The center of this swirling cluster began to calm and open to reveal a shimmery orange, yellow and red portal. From the center of this colorful portal came a bolt of red lightning that struck a large boulder directly below it. Cracking the boulder in thirds and sending gravel sized shrapnel a dozen feet in every direction. The swirl now growing bigger began to spin faster and faster until with a loud roll of thunder and a final bolt of lightning sent a large winged spherical black and silver object hurling down towards the ground. With a loud crash the object landed in the middle of the split boulder where it lay perfectly in-between the three pieces.

The sky seemed to go in reverse as the colorful swirl began to spin opposite and get smaller and smaller until just moonlit clouds remained. The clouds that just had such revolt seemed to vanish as quickly as they came. No sign of anything.

As smoke cleared from the recently landed capsule a hatch like door on the top – with a rather flashy embellished letter E – swung open with a great hiss and making a loud metallic bang as it hit the outside of the capsule. Two four fingered hands emerged and pulled a tall muscular frame to the top of the hatch. The figure stood atop the capsule and surveyed his surroundings. He was wearing a gray spacesuit that was off his arms and torso and tied around his waist. He wore a white undershirt that was stained with grease and dirt. He looked dirty and troubled as if he had tried very hard to get here.

He closed the hatch with a slam and jumped down to the ground below falling fifteen feet and effortlessly landing on his feet as if he’d fallen only three. He raised his left arm parallel to his chest and spoke into the communication device that was fastened to his wrist.

“This is Hunter 20567, Groilin, I have arrived to this desolate little town. I will begin my work as discussed. If this message is received late know that my next will be instructions for phase 2.” He spoke in a dark raspy voice. The kind of voice that would send shivers down your spine. He pulled a pearl finished and teardrop shaped remote from his pocket and pressed a combination of two buttons. The capsule behind him began to hum. Growing louder before falling silent and cloaking itself to match its surroundings. Unless you had seen it previously, you would never know that on top of that split boulder in the dense unexplored forests of Hue Falls, lay an inter-dimensional space-time ship. And from that ship a new threat of complete chaos.

Short story writer from Oklahoma. Thankful for the opportunity to be read.

Read next: The Locket for Power