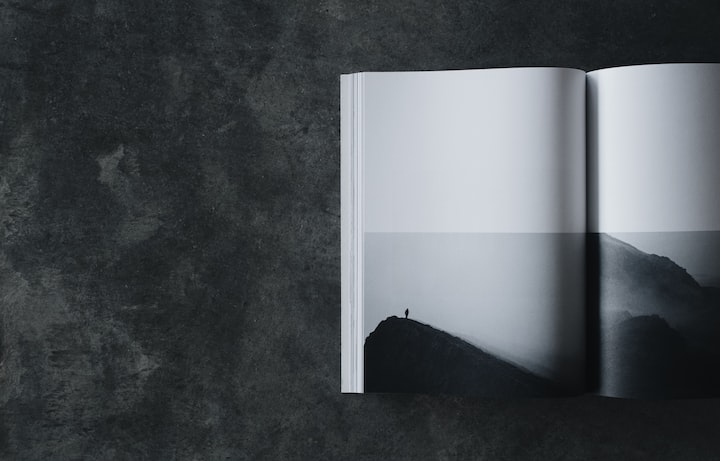 Photo by Rhema Kallianpur on Unsplash

'Charlotte, I'd hoped you would find this, though I know it'll probably take you some time to read it. What it is though, I'm not quite sure yet, but it'll be something and I hope it will help, ease the blow, though I know it won't. To be honest this is probably more for me than it is for you, but I've always been the selfish one, so can we really be surprised?'

I turned the pages of the black journal, which was so beautifully constructed. I figured I might as read one of the Western world's greatest collection of letters and poems before I left on this venture. It would be something to remind me of the beauty of humanity before I left it behind, to set up the new colony. There was an ignorant bliss about the final days, those days which were the closest the Earth had ever been to its natural state, when the damage was salvageable. I closed my eyes and imagined the world that was, the way the sun would rise in the morning, cascading pinks and reds, the rain, how it wouldn't fall in the extremes. When I opened my eyes I was reminded of my reality. 'For Charlotte,' I mouthed watching the birds saw meticulously through the sky searching for anything they could get their claws on. Their hazy shadows flickering in the yellow ashen sky, illuminated by the ever present yet never seen sun, Charlotte would've woken to blues skies I thought to myself and she would've slept under stars. Well, at the beginning of her life she would have, I pulled myself up from the bench which overlooked my excuse for a garden and headed inside to comb through the pack the lieutenant had given me. I had exceeded my daily exposure time and had very little time left before I would have to give my reports and assessments of the current plans.

'One of these days you're going to poison yourself, you know' KC called, engrossed in the words of the reporter Marzin Walerman, I had tried to sneak back in whilst he was on, as she had a way of talking about things which I didn't want to discuss. I still hadn't worked out if she didn't realise I hated speaking about work, or if she simply didn't care. It didn't matter anymore though; I'd be leaving in a few months and she had a reassignment pending. Yet when she called me, I was always drawn to speak to her.

'Professor Ran Birlons-Kirver has confirmed that he will not be embarking on the expedition as he still believes there is work to do on Earth, join us tomorrow at Murk-Light, to hear about his plans for those of us who will be staying behind.' The handsome man on the vision-sphere sang, I understood why KC was so enamoured with him, he was charming, and he had a fun way of making the fall of humanity sound so cheerful.

'I'm Marzin Walerman and IBHS known formally as the international bureau of human survival have decided most of you will die, back to you Pam' I mimicked exaggerating his smile and wrinkled brow, I sank into the armchair next to KC, accepting that it was better when Marzin did it.

'She dies in the end.' KC said shoving a handful of faux nuts into her mouth,

'We all die in the end, those who are staying on Earth will just die a little sooner than us.' I said looking at the woman on the vision-sphere, she didn't stand a chance living in the outer zones, even if it was just during the rotations.

'Of all the things to read before you go,' she laughed peeling herself from the couch, the flakes of faux nuts dotted her jumper. 'A man called for you, Beter something? He said he needed to speak to you, urgently' KC stretched, she had probably been sitting in that very spot for hours.

'Mr. Betersfield?' I hadn't seen or heard from him since my father had died, he was a man of strictly business, he had made sure of that.

He had told me as a child and in many ways he was right, I was surprised to see him at my father's funeral. I was even more surprised when he called my father a friend, my father did not have friends only acquaintances. A man with such a damning outlook on life could not have friends, surely?

'Young sir, who still young but not as small,' Betersfield chimed, he was awfully cheerful, it made me uneasy, to watch this tall old man, who had taken good care of himself but, was still haunted by the remnants of plagues the Southern Fires. His hollow eyes set on mine before he seated himself at his desk holding my gaze, only the sweet hum of his desk lamp, which was quite frankly hideous, filling the silence.

'Your father mostly left everything to your mother when he died,' Betersfield said adjusting his glasses.

'He did,' I agreed, Here we go, I thought another 'friend' coming to see what they could squeeze from the old man's stone cold pocket. This hadn't been the first time someone had come asking for something of the old man's. The smart ones asked for theories and his old transcripts outlining doomsday and the best places to go in order to maximise comfort and minimise suffering. The less smart 'friends' came for money, they tended to be politicians who had fallen out of favour with the public or disgraced businessmen from the private sector. Didn't matter what this 'friend' did they all came with the same story, the old man had promised them the information or the money in life and it was only noble that, now that Armageddon was around the corner, they got it in death. But I never expected it from Betersfield, I had expected boundaries.

'Mostly.' Betersfield hoisted himself from his chair, I wondered why he sat down to begin with, if he knew he would be pottering around only moments later, old age I suppose. 'He left me a few things too.'

I watched as he shuffled across his office, amazed by how little it had changed all these years. Even Marisa still stood in all her glory, that was what I had called his Bia statue as a child, she was so dynamic I was entranced, a Goddess from the Older World, one that was ancient even to Charlotte.

My attention flickered back to Betersfield who was now returning to his desk with an aged document, there was an irony to it. Most men in his field would have all their works on an Domain-Sphere and here was this man with folders and books plentiful for a library or two. Boundaries.

'Your father had hoped you would do something great with your life,'

'He did?' I exclaimed the sarcastic shock radiating through the room, amusing only myself.

'Your mother told me you were selected to lead a division on the first wave expedition. That is quite the honour, quite the feat. He would've been proud to see you doing something meaningful with your life. Rather than trying to revive a lost cause.' Betersfield wrote in various places on the document before burning his sigil into what I could only assume was the ID box.

'He wanted me to release this to you, when he thought you were ready, worthy of it. When he would have, if he were alive, known you were to use it wisely,' He continued pulling himself up from his chair and handing it to me, he shook my hand firmly, this felt right, more natural. Though whether or not my father would have been proud of me I was unsure, I had tried to deny the role several times, but apparently choice was not the matter when it came to humanity's survival, the wants of one did not out way the divine wants of the Bureau.

'Take care young sir, I wish you safe travels.' Betersfield smiled at me, it was strange I had never seen him smile, not with his eyes, not like this. His smiles had always been empty, it's hard to describe an old man's smile. When he is one who had been hardened by some of the harshest phenomenon's the planet had to offer. It was foreign to us both though, I could tell that it was the first time either of us had seen that smile in years. It's funny, for years I had never felt a particular affinity or disdain for Betersfield, a feeling I had assumed he had reciprocated, and yet here in his office knowing I would never him again I was overcome with unexpected melancholy.

As I stood outside of Betersfield's office I thought of my father, I thought of how he had so adamantly wanted me to pursue Eschatology, to cement myself in his field. To continue his work and secure my future amongst the dying modern aristocrats, it had only made sense I smiled faintly slinking into the backseat of a Travelaar. Just what had my father hoped for me, what expectations did that man have to prompt Betersfield to say such things? And with such certainty? I suppose there was only one way to find out. I pulled the document Betersfield had handed me and gazed upon the pages which were bound together as my driver weaved in and out of cars, waving away sellers and feeders I set my eyes upon my father's penmanship.

Son, if you're reading this it would appear that life has presented us with a bittersweet moment. One I wish I were able to savour with you but mostly cannot because the ghosts of old have claimed what was left of my decaying shell. I was never one for poetry so I will leave that to your mother, I pray she has bested me at yet another thing and outlived me. If not than I hope you do not find yourself still at the mercy of the grief of loss. I wanted to leave this for you as to congratulate you, as I knew you would accomplish something great though I'd have hoped you had done it sooner. Alas when racing the sands of time more often or not you lose and when you throw Death into the hand she is sure to best the strongest player. Alas I have not written this to languish in my Death nor have I done so to discuss my life, but yours. I' m not sure what this great accomplishment will be but I know it would be one which I could never have truly fathomed. I also know it probably has very little to do with advising the United Nations on Doomsday preparations or damage control. I hope it has something to do with that dream of yours, the one I found to be utterly hopeless, reviving the Earth or at least minimising damage to it. Son I have left you 20,000 credits to do with what you please as a gift to congratulate you on your achievements. I had hoped I'd be able to present it to you myself -