by Emily T about a month ago in fantasy

A Moment in the Future 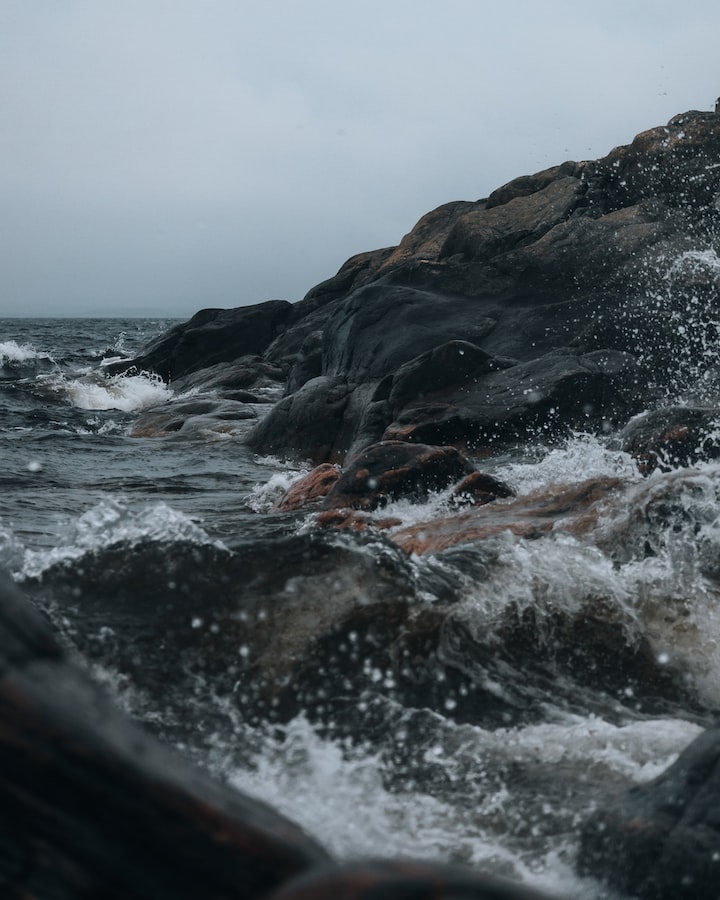 Photo by Sasha Matic on Unsplash

He was drowning. His hands scrabbled feebly at the surface of the slippery rocks, and when he chanced to open his water-washed eyes, a gargoyle with glowing eyes leered down at him.

Somewhere far away, a door opened. Another demon flew through the door, toward a young woman, a seer, lying in bed. Her eyes swam with a vision- the man drowning at sea. The demon sat and watched.

400 miles away, in the last un-sunk island, hot as a desert, in a small, crumbling house, a man looked under an old-fashioned microscope at a sample.

His assistant, in a frayed lab coat, stood and looked on with a clipboard. She was relaying his words into a letter to a colleague. She scribbled them in neat, but shaky font, and it could be read:

Hair of demon alien hardly resembles that of human. Origin likely from a moon of Jupiter. Cellular structure represents a species far more advanced than human. Dear Rhea- the situation is worse than we feared. We have destroyed ourselves and our planet, and the demons are here to overtake us.

On a small, stationary starship, a child played with a heart-shaped locket. A mother, with long, tangled black hair, watched her child with anxiety, remembering the seer's vision of the locket. It was unknown whether the demons had witnessed her vision, but the kind seer had assured the mother that she would distract the demons with a vision of a hero drowning. Her sister, Rhea, was out on a shuttle, taking her shift as guard of the starship. She could be seen spinning in a loop-de-loop out of the window, and the child giggled and dropped the locket as she watched the shuttle.

The mother lurched out and took the locket, fear in her large black eyes that the child did not understand, who started crying immediately. The mother could offer no comfort. The child needed to learn of the desperation of their world.

Neither the aunt nor the mother could keep the demons at bay for long. The demons were as near to all-knowing as the seer herself, and before long their darkness took Rhea the guardian, and their dark claws surrounded the starship like a spider’s legs curled around its trapped prey.

Before long the demons’ eyes blinked into the mothers, reflecting her morbid fear. The child was spared no glance, for it was trivial and played with a toy like another stupid human. The mother was easy prey for hungry creatures of darkness.

The child sensed his mother’s fear, as children do, and screamed and dropped the locket. What was to happen was something only the seer could have predicted. The locket exploded, and from it was launched a dense cloud of white smoke. In the midst stood a djinn, an ancient spirit. The djinn, having been trapped in the locket, grew to its largest size, eyes glowing the color of sunlit ice. The demons were squashed. Every bit of darkness fled the room, the starship, and squeezed itself back into the vacuum of space.

Miles away on Earth, The seer laid back in her bed, satiated, knowing that the Earth was saved for now, but she daren’t rest yet. The wrath of a trapped djinn would be another monster to conquer. Or at least, as her sight told her, the Earth’s own most secret creature was the best match for the demons, but it could be calmed by the charm of a young boy.

Back on the starship, the child and the djinn stared at each other- eyes dark brown, and eyes the color of true ice. A truce was met, but the boy was too young to make that seen to the world.

Receive stories by Emily T in your feed
Emily T
Read next: The Cosmic Donut