They're the same right? 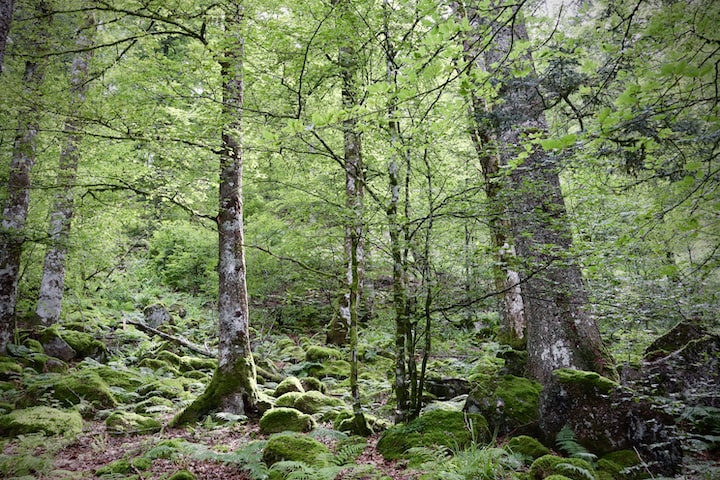 Photo by Thomas Evans on Unsplash

“Nobody can hear a scream in the vacuum of space, or so they say,” someone whispered into Amber’s ear in an attempt to scare her.

She swatted her hand behind her, almost hitting him in the face, “Stop that."

The trees stood above her like skyscrapers, while the warm orange and red leaves fell from above. The sound of Amber and the other soldiers crunching on leaves could be heard from miles away. Ah, yes, how stealthy they were. The cool breeze hit their metal gear, making them shiver with goosebumps each time. Her ginger hair, pulled tight into a high ponytail, still managed to slap her in the face with every blow of the wind. She was the only woman out on the field tonight, how lucky was she! She and the rest of them were freezing, and wanted nothing more than to stop to start a fire. However, they never strayed from the path, and their tired legs kept moving.

“Soooooo, doctor,” the same soldier said to her, in a seething yet sweet voice, “It’s been a while, how are you and your other engineers doing?”

She ignored him, walking at a faster pace than him.

But he didn’t give up, “C’mon, didn’t you miss us? All the fun times we had together? All the battles and combat and-“

“No,” she said flatly, continuously staring at her thermal camera.

Another soldier came up next to her as well, “Lemme see, I bet you can’t even see it properly. You’re not wearing your glasses, doctor.” His voice also couldn’t get any more mocking.

Amber pulled the camera away to rest on her chest, “I can see it just fine, now please just focus for once? I don’t have time for your games. We’re on the same team here.”

That just fueled the fire. The first soldier, whose name was Gian, gave her a nasty scoff and said, “Oh, are we? I couldn’t tell. You’ve been gone so long that I thought we’d never see you again.”

She felt a twinge of anger in her, but she let it sit, “Whatever you say.”

He stepped in front of her, clearly not satisfied, “Stop avoiding me and-“

“That’s enough, Torres!” A voice boomed from behind them, “Get back behind Dr. Stephens, and keep your mouth shut.”

Sergeant Andrews was a tall, dark, intimidating man whose looks could kill. Not in the sense that he was attractive, but that his glare could make you run home to mommy in a span of five seconds. He made her feel safe here. Well, as safe as one can feel with a bunch of misogynists surrounding them.

“I’m sorry about him, about all of them,” he sighed, making his way to her side while the others were scattered behind them.

Amber chuckled, “I should be the one saying sorry. You’re the one that has to deal with them every day. They have an award for that right? ‘Meathead tamer?”

Andrews laughed with her, giving that clean, perfect smile he always had, “Something like that. But don’t turn this back on me, Doctor, I really am sorry for their behavior. They always made you feel like nothing in this division, and once you became something bigger after you left, they just couldn’t handle it. How they even convinced you to help us with this is beyond me.”

“I don’t know, I felt like I didn’t have a choice. The way the director was wording it made it sound like If I didn’t help, he’d be sending you all into a suicide mission. It was ridiculous.”

Amber stopped in her tracks, watching her thermal camera closely.

Andrews looked over her shoulder at the camera, “What’s wrong? Are those the Whitewoods the director mentioned?”

“No, it was only one of them, and he said is was smaller than the ones we normally see anyways.” She gripped the camera tightly, “Not only that…whatever these are, they aren’t moving.”

Even though she was only talking to Andrews, the others couldn’t help but listen in.

“I’m taking the safety off!”

“Stop!” Amber snapped, whipping around. “We don’t know what they are. All we’re seeing right now is heat. Yes, take the safety off, but only for now. You all know as much as anyone what recklessness can do to you in face of a Whitewood. I’m bringing you all back alive, is that clear? There will be no heroes, no sacrifices, only happy, smiling men making it back to their families.”

They all stared with creeping silence.

They snapped out of their little trance, “Yes, ma’am!”

She sighed, relieved, finally getting to lower her voice. Amber shouldn’t have even raised it to begin with, in fear of attracting a Whitewood, but there wasn’t really any other way to get the attention of over twenty battle-hungry men.

Andrews waved his arm forward, “Well, then boys, let’s continue on. Don’t want to keep whatever is lying there waiting!”

The heat signatures were only about fifty feet away, but every step they made towards them made Amber’s heart race more and more. It had been over a year since she had been out in the field. Yes, she had the experience, but she had finally been able to relax in the comfort of an office rather than a life-or-death situation of fighting monsters. That is, until the director practically forced her to go on this mission, where she might not even come back alive. The crunching of leaves became even more ominous the closer they got. Were there always these many leaves? These many trees?

They finally stood behind a large tree where right in front of it lies the heat source. The tree wasn’t even that large, but to them it seemed like a doorway to hell knows what. Andrews took the first step, creeping behind the tree. His face went from weary to horrified in the matter of seconds.

He sighed, rubbing the bridge of his nose, “Good news, no Whitewoods. Bad news….” He stepped farther behind the tree, drawing the rest of them out, “I found our missing men.”

Ten of the missing Termination soldiers were sprawled out on the grass. It was horrific. One man had no face anymore, and the back of his skull could be seen from the front. Another was leaning up against the tree, completely disemboweled. Two of them were killed so close together it was hard to tell whose body parts were whose. The entire group, as experienced and skilled as they were, were all taken aback.

Amber took in the scene around her, completely in shock. She had seen her men die before, but not in such a blood thirsty manner. This wasn’t like normal Whitewoods. Once they’ve killed their target, they moved onto the next. It wasn’t like them to completely tear apart someone.

And they were all out alone with it, wherever it was.

Amber gulped and turned to the men, “I think now would be a good time to pull out your weapons. And please activate your HFP’s.”

HFP stood for Holographic Field Platforms. It was the technology Amber developed.

And the sole reason she left being a soldier behind.

The men fumbled around murmuring, pulling out their weapons but not doing any activating.

“Is there a problem?” She looked all around them. Now was not a time to be hesitating.

One of them finally spoke, “We, uhm, didn’t bring them.”

Andrews lost it, “You did WHAT?”

Another spoke, shaking, “We thought it would be funny if we just, y’know, didn’t bring them. We wanted to show Doctor Stephens we didn’t need her stupid junk! We didn’t know this would actually be serious!”

Andrews stepped forward, practically spitting in the man’s face, “You thought it would be funny? To risk your own lives in an attempt to feed your own pettiness? I would find a way to punish you, but right now you best pray to God, boy, that he lets you live tonight.”

The two, along with many others, starting raising their voices, turning the lack of preparation into a screaming match.

And that’s when they heard the low growl, so low they could feel it vibrating through their bodies.

They all spun their heads, desperately trying to find where it was coming from.

Until a loud crunch was heard.

Gian was dangling from above, consumed by none other than a Whitewood. It stood over them, towering like a lion and a mouse. Even though it was smaller than the rest of the others they had fought, it looked even more violent as well. It’s scaly, white skin, pitch black claws, and red eyes that were hungry for blood.

Then one of them ran.

The Whitewood threw down Gian with a thud, darting its way to the poor man. It stuck its claws so far into him, every organ one could think of was flying out into the wilderness.

One man after the other, having nowhere in the field to their advantage, was ruthlessly slaughtered.

Amber and Andrews activated their HFP’s and created a stairwell, leading them to the top of some trees to hide out. They had no choice. Over half of their men were taken in the blink of an eye there was no saving anyone but each other at that point.

Once they made it up to the stop, they stopped to breathe. They were covered in their men’s blood and other body parts, but they were in too much shock to worry about that.

Amber looked over at Andrews, “I told them I’d bring them home…”

Andrews grabbed her shoulders and squeezed hard, “I know, but, Amber, they’re gone. It’s not your fault they didn’t listen. You tried your-“

A blinking red light was seen from Andrew’s wrist. The platforms below him flickered red as well.

Before Amber could get a proper hold on him, Andrew’s platforms were gone into thin air, and he was plummeting twenty feet into the ground. If he wasn’t already dead by the time he hit the ground, the Whitewood would have his way with him.

And there was nothing Amber could do but sob.

After hours of the Whitewood tearing into each men, bit by bit, and hours of Amber sobbing until she almost passed out, she heard a noise. A slimy, crunching noise that wasn't coming from her men's bodies. She looked down to see what it was and gasped.

The scaly, deadly creature from before began to shrink. Its head grew dark black hair. It’s white skin turned into a pale peach. The red eyes were now blue and small.