Katori and the Star People

by A.C. Hampshire 2 years ago in fantasy 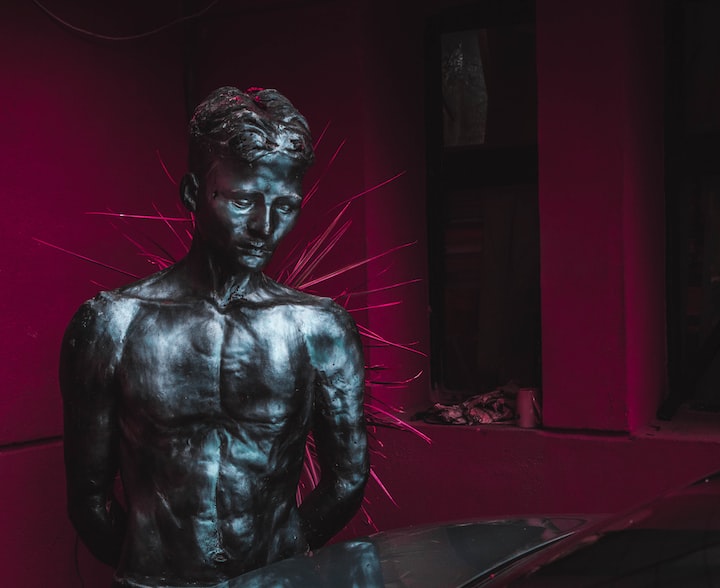 Photo by Naveed Ahmed on Unsplash

This was the plot outline I did for the series Katori and the Star People, a six issue mini series

Katori, a 25-year-old paralegal, returns to her home town on a New Mexico reservation. Her grandmother, who has always tried to get her to be more in touch with her native heritage, which Katori has generally rejected throughout her life. Katori has been having strange dreams and finds out that so has her Grandmother, who explains that the dreams come from the old gods, the Kachina, who had come to the earth long ago and met with their ancestors. Gran believes that they are trying to contact them and uses some kind of ancient magical technology to conjure visions of the first time their ancestors met the Kachina. That night, Katori tries to sleep but dreams of the Kachina in their ship, designed in Aztec and Mayan style designs. They are fleeing from something, while they try and send a message, the dreams, to Katori and the others. The signal is hacked by that which is chasing the Kachina, the Enochs, a winged race of golden-skinned humanoids with black pits for eyes. They instead send something to attack Katori in her dreams, a giant lion-man creature calling itself Buer. The creature attacks Katori who tries to run and flee but finds her dream world being turned against her. Before Buer can pounce on her, a net suddenly forms in front of it, restraining it. We find that the net is the design of a Dream Catcher and that Gran is holding one over the sleeping Katori in the real world, Channeling her energy into the catcher to slow down the Buer while calling upon the Kachina to help them. The Kachina in their vessel lock onto Gran’s transmission and use it to send one of their own, Patlotl, through Gran and into Katori’s dreams where he fights and defeats the Buer. Patlotl makes sure Katori is safe and then tells them they are coming. Katori wakes up suddenly and breathing heavily. She looks over and sees Gran has collapsed on the floor next to her bed, the dream catcher laying beside her. Katori rushes to her and tries to help her.

Gran is taken to the hospital, and Katori visits. Gran remains unconscious and so Katori goes back to Devil’s Tower to try and find answers. While there, she begins to have visions of Patlotl, who has developed a connection to her psychically. In the midst of her visions, the Kachina crash land on the top of Devil’s Tower, Katori goes to help them and finds only five survivors, Patlotl, Tihuiti, Aztlan, Mazcapotli, and Mictlacoatl. She takes them back to the reservation and hides them in the barn on her family’s property. The Enochs land their ship in the Middle East and begin to go about finding their own followers on Earth. When Katori brings the Kachina some food, she finds they have taken off their armored space suits to reveal humanoid looking creatures with dark skin and blue luminescent eyes. Patlotl thanks her for the food and Mictlacoatl, the captain of their team, asks what happened to the Grandmother, as she was their contact here on earth to help them find the Star Children. Katori explains what happened after Patlotl stopped Buer and asks what the Star Children were. Tihuiti, the scientist, explains that the Star Children are Humans who have receptive brains that allow for the Kachina to contact them, and to even use their powers on earth. Mictlacoatl says that, because of Gran’s interference with the Enoch attack, they might be able to locate her, and that she may be in danger. Katori, Patlotl, and Aztlan go to the hospital to try and protect Gran. Gran momentarily regains consciousness to see Aztlan, and it is revealed that Kachina can make psychic bonds with Star People and that Aztlan and Gran had bonded several decades ago. Aztlan waits with her as she falls back to sleep.

The Kachina enlist Katori to help them find the Star People scattered about the American West in the hopes of awakening their powers and stopping the Enochs from invading Earth. Katori is also told of the war between the Enochs and the Kachina. The Enochs are a conquering empire that has been stretching their control across the universe. They had attempted to take earth back in primitive times, but the Kachina, then a strong and powerful race of explorers, stopped them and found the Star People and gave them the power to defeat the Enochs. That power has since been lost to the Kachina and the Enochs now threaten their homeworld as well as Earth. The Kachina hope that the power to defeat them is with the Star People and so must try to find them in hopes of recovering it and stopping the Enochs once and for all. The Enochs, now moving through Europe, begin to find their own sensitives on Earth, occultists who believe that they are Angels. The Enochs use them to help better channel their powers on Earth and fight the Star People. While Katori and the Kachina travel about and try to locate Star People, Katori begins to develop a crush on Patlotl.

With the help of the occultists, the Enochs travel to America and begin to hunt Katori and the Kachina. Katori and Patlotl have been finding Star People and sending them to the reservation to work with the other Kachina in honing their powers. The Enochs find the reservation and first try to attack Gran, who is defended by Aztlan but is severely hurt. He and Gran then merge minds and powers, allowing Gran to heal and carry Aztlan within her. The Enochs then move on to attack the barn and try to wipe out the Star People. Gran/Aztlan comes and fights them, saving several Star People before Katori and Patlotl arrive and join the fight. In the battle, Mictlacoatl is killed and as a result, one of the Star People also suddenly drops dead. The Enochs are chased away for now as the Kachinas and Star People regroup.

The Enochs analyze what had happened in the battle and believe the strength the Kachinas are looking for comes from merging the two together. They then find the occultists who utilize rituals of invocation to bring the Enochs into themselves. Katori talks with Gran/Aztlan and finds that they are more powerful together because of their bond than they ever were apart. Katori begins to think of a way to bind more Star People and Kachina when the New Enochs attack. The Kachina and Star People flee to Devil’s Tower, but Patlotl is injured by one of the New Enochs. Katori must meld with him in order to save his life.

Katori/Patlotl begin to meld the last two Kachina with other Star People to make them stronger and protect the other Star People who will be focusing their minds to contact other Kachina on the homeworld and channel their power in the fight. The New Enochs mount a Seige of Devil’s Tower and are held off by the bonded Star People. As the Star People believe that they’ve successfully held them off, an Enoch hacks into the Psychic Transmission from the unbonded Star People and possesses one of them. The Possessing Enoch attacks the other Star People and Katori/Patlotl have to fight him off. During the fight, they learn that the Star People are able to bond with the Kachina because they are the descendants of the Kachina, and because of their shared genetics, they can bond to create an even stronger race able to defeat the Enochs. While the Enochs’ bonding is inferior because they never intermingled their genes with other races, making a total genetic bonding impossible. The Possessing Enoch ends up falling off of Devil’s Tower, killing itself and the Star Child it had possessed. With this new revelation, Katori/Patlotl are able to get a long distance equivalent to the bonding, allowing the Star People to awaken to their true potential. Having learned of the bonding capabilities from the Possessing Enoch before he died, the New Enochs make a last ditch effort to stop the bonding but are too late as the Star People burn them out of their hosts, and then take the Enoch Ship back to the Kachina world with the Star People that they can fully bond with the other Kachina and revitalize their gene pool against further Enoch invasions.