by Tristan Palmer about a year ago in science fiction 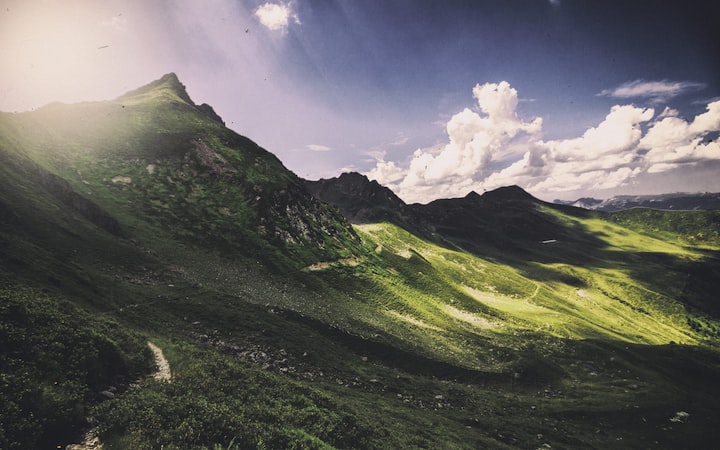 Photo by Antonio Grosz on Unsplash

“If I take point on this and I’m the only one who comes back, is that good or bad?” Jack asked as he snapped a set of switches down in the cockpit.

Laughter came over the communicator as the canopy cockpit came to enclose Jack in the fighter, and Jack flexed his fingers over the flight stick; the fighter hummed gently and Jack wondered how up to date the internal parts were.

There were several buttons of white and grey color above Jack's head, the same colors as everything else in the cockpit. Jack, having been colorblind his entire life, decided he would figure it out as he went.

In the hangar bay a wide door began to open, and ahead of Jack a set of ship engines flared, a ship rising from the deck. The Flayveck, Tark and Tuk Wellick's ship was a small sized cargo ship that took up a better portion of the front of the Maude Ann’s bay. As Jack gave the throttle a small push the fighter rose up, and the alien guided it forward, starting to move across the hangar. Again he wondered what he would call the craft, but decided Taziba would work for now.

Piloting the ship outside of the Maude Ann’s hangar bay Jack pushed the throttle up, keeping pace with the Flayveck. Glancing at the speed gauge Jack smirked at the numbers, wondering how fast it would really go. Flicking two switches and reaching up to first look at, then flick another set, Jack looked back at the twin flare of the Flayveck engines ahead. In the distance was a planet with "gray" patches over and other bits and dots of color. Jack was sure it was green mountain ranges, but he couldn't be certain.

The planet Titan drew closer, and Jack wondered briefly about the last time he’d been on-planet. He’d retrieved his gun and father’s vest from his upstairs bedroom, then proceeded to go to work for one last time. Arriving there, Jack shot and killed both of his old bosses, then fled on his speeder. Racing down the streets he was sure he would be pursued by peacekeepers, but the alien only headed to the nearest spaceport. Arriving, Jack wold run into Krang and his raiders. Krang asked how Jack could be useful to the gang and Jack, after listening to what Krang had to say, only offered,

“I know my way around a computer,” holding up his left arm as added reassurance.

Krang grinned then, a set of teeth fashioned and shaped from a light metal, and told Jack,

“Then if you want to get away from what would surely be a hell of a bounty or your ass in jail, come with us and help out.”

Jack considered the offer for a moment, then turned as his ears heard sirens in the not-to-far distance. He looked back at Krang, then hefted his sole bag on his back and sat back down on his bike. Pulling down his bandana and goggles Jack squinted at Krang, then said,

Krang nodded, smiling as he said,

Snapping out of his lull Jack snapped the comm button back before grunting out a,

“I said,” the comm voice coughed, when we land on this planet, my brother and I will start collecting these farmers food. You and the Human will protect us, and not get yourselves killed in the same process.

“Can do,” Jack said as he leaned back in his seat.

Looking right Jack snapped back a switch then two more, setting more power to the thrusters. One had on the throttle and the other on the joystick Jack flexed his left fingers, the metal on metal making a tak tak tak sound.

When Jack’s small ship and the Flayveck were in Titan’s atmosphere, Jack kept his hands steady on the controls. Past the cockpit, the Flayveck was moving ahead, and Jack pushed the throttle lever up. The Taziba hummed at Jack’s motion, and with a tilt of his head to the left, Jack said,

“Tuk, I'm gonna see how fast this thing can go.”

With a push of the throttle lever all the way forward Jack leaned back in the seat, the Taziba shaking just slightly as it sped up. Keeping his hands steady Jack watched the Flayveck pass him, then Titan’s surface got closer. Over the comm Jack heard,

“Don’t you go smashing into a mountain. Hate to scrape you off a cliff side…” a cough made Tark pause.

“Don’t lose a lung,” Jack said with a grin as the Taziba came to fly over the tip of a mountain.

“Keep it up, smoker, and you will sound like me,” before letting out another cough.

Still grinning Jack pulled his new craft down, pulling the flight stick and turning to pass through a narrow gap.

Tugging the stick again Jack piloted the craft upside down, his rifle falling to hit the cockpit canopy. Letting out a laugh Jack reoriented the Taziba and shook his head, the jang he’d inhaled earlier fatiguing the young raider.

The mountains flattened out into stretching plains, and in the near distance Jack saw a city with tall buildings, seeming to touch the sky. Pulling back the speed lever the craft slowed some, and Jack settled in his seat, his adrenaline combating the drugs in his system. Taking a deep breath Jack let himself stay relaxed as he pulled the control stick up, looping the Taziba back around to find the Flayveck. The small fighter ship, Jack decided was very fast indeed.

The Flayveck hadn't gotten far as Jack saw the cargo ship was just passing over the same range of mountains Jack had just gone over.

As Jack came to fly back past the cargo ship he slowed down some. the Flayveck passed the Taziba, and Jack pulled his ship into a tight right bank, looping back around to fly behind the bigger ship. Even without any color to help guide him, Jack had what felt like the basic controls of his ship down; for now, at least.

Hi all. All I am is a humble writer who works a full time job, just to afford to live so I can have time to write. I love science fiction with a passion, but all works and walks of writing are important to me.

Receive stories by Tristan Palmer in your feed
Tristan Palmer
Read next: Tales of Sore: The Keeper of the Kasai-Tamashii