It's All in the Stars

by Jim Read 11 months ago in astronomy 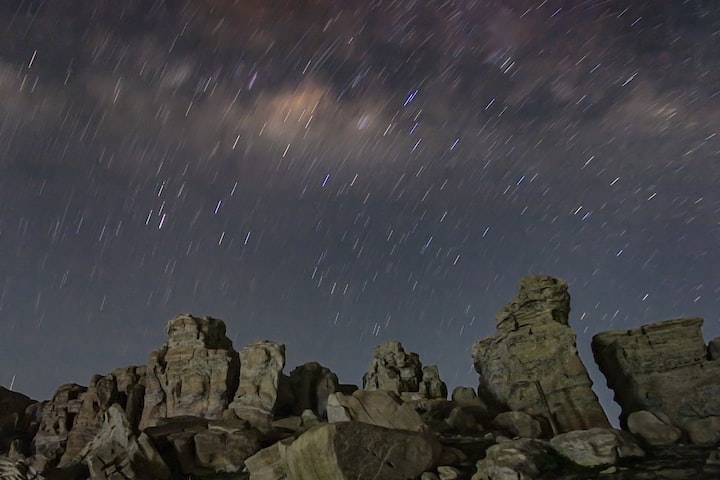 Photo by Supri Yanto on Unsplash

There has been a fair bit of scholarly research on the subject of astrology and whether it has scientific or statistical merit-quite a bit more than I expected, honestly. It largely tacks toward there being no statistical correlation between personality traits and the sign in the zōidiakòs kýklos, the zodiac system with which most of us are familiar. There are some who did find correlation, but those studies were not repeatable. I've included a few references to some articles below, for fun. But the question before us isn't about the science, nor is astrology beholden to scientific approval or validation.

Humanity has always striven to create frameworks to help bring order to the chaos that is not explained by science or the knowledge of the time. Astrology brings a framework rooted in ancient wisdom and observations that attempts to bring order to the most elusive of understandings and the most chaotic of natural phenomena: human behavior. Humans, for the most part, either want to be able to control a system or predict its behavior. [citation needed, possibly projecting personal traits on Humanity] Astrology speaks in a language that leaves politicians the world over envious. It's vague enough to encompass a large audience and yet specific enough to speak directly to you. It can chart out your day, give you insight into the type of person you or someone else is, and even free you from the responsibility of directing your life's course. It's simple enough that anyone can grasp the basics, but it has a rich enough and deep enough well of intricately woven axioms which balance the universe and all those who inhabit it providing enough material for a lifetime of study. It is a wondrous framework, and I inhabit said framework as Virgo, the Maiden.

Specifically, I am a Scorpio Ascendant Virgo, born under the Moon sign Leo. To gauge the expected strengths and weaknesses of the summation of my Sun, Moon, and Ascendant signs, I made a spreadsheet. You'll see that is an expected behavior from me. I am predicted to be above all else, kind and helpful; as well as friendly, hardworking, overly critical of everyone (myself included), reliable, passionate, mutable, and, evidently, underhanded. I do not tolerate rudeness and hate asking for help. More generally, as a Virgo, I'm apparently funny, loyal, intelligent, good with money, clean, analytical, bit of an ass, and bad in the sack.

I can't speak to the accuracy of all those statements but I will say that being introverted, "friendly" is not usually what bubbles to the top of people's adjectives for me. People who appreciate the droll or puns may find me amusing but I'll hold off on switching careers. I do like to think of myself as hardworking, helpful, and kind; but, reliable and underhanded are not attributes I would assign myself. My lack of reliability isn't born of malice or carelessness, it's just a memory thing. Inspired by a favorite comedian of mine, Steven Wright, I tell people I have a mind like a steel trap: rusty and dangerous. I don't mind rudeness, but I won't tolerate a bully. Although I know better, I will chew through my own arm before I ask for help. I am not clean and not a great fan of change. Change for me is like physical pain; I can tolerate a great deal, if necessary, but I don't typically seek it out.

I'd say I fit as many of the Virgo attributes as any given person would. They seem specific, but there's so many that odds are in favor of matching enough that it seems like a perfect fit. However, once you go beyond the Sun sign, and look to the Moon and Ascending signs there are actually conflicting tendencies that could be as easily interpreted as proving it's all a bunch of hooey. Or, one could acknowledge the near infinite complexity and mercurialness of humanity and say that this is a model for the conflicts, growth, and changes in blood sugar that affect anyone's personality. You would also want to throw into the discussion that this isn't the only Zodiac.

The Chinese Zodiac (Sheng Xiao or Shu Xiang) also attempts to classify and predict your personality based on the year you're born. I am a horse. The Sheng Xiao is also divided into 12 signs, but these are animals rather than mythological figures. The horse is strong, independent, friendly, and generous. My specific Elemental horse, the Earth Horse, exhibits many of the same characteristics as my Ascending Scorpio Virgo born under a Leo Moon like being a workaholic, and overextending oneself. So from two different and unrelated astrological systems, my personality traits are expected to be similar; so maybe there is method to the madness!

All that said, there's a very real question that comes out of this. I do have character traits that line up with the astrological expectation. Most of us do; it's why the system has endured for millennia. But is that really the important part of astrology? Is astrology really about being "right" about a person's true self or finding compatibility in others? If astrology were just a system of predictions and personality definitions, I would argue it was a poison to humanity. It would lead to the wonton quashing of any sense of responsibility for actions, a complete disinterest toward personal growth, and a general nihilist view that would literally halt humanity's progression as a species. Instead, I see a system that guides an introspective person to know themselves better and to cause even a skeptic to unwittingly take a hard look inward.

Whether or not you believe in astrology, its history, its fervent following, and the fact that every now and again, it's a little too right, forces you to take what it says at least seriously enough to refute it. So when you're told that your sign says you're energetic, you will automatically agree or disagree with that statement and necessarily start listing the reasons for your position. You might never utter a word about it, you might just make some silly, sarcastic noise, but your brain just thought about you and that facet of you for a second. It made you wonder if that was a trait you felt you'd like to have or wish you didn't have, if others perceived that trait in you. Maybe you just take it as a pep-talk. I am intelligent and kind and funny. It can be very validating if even only for a moment in time. It can also force attention on uncomfortable truths leading to internal dialogs about yourself and how you'd like to grow as a person. In this way, I see astrology as an important catalyst to human development.

Astrology is not backed by science. Most every study confirms there is no statistical correlation between sign and personality or morals. I am a Horse Maiden tinged by the Lion and the Scorpion. I do not exemplify all of these sometimes mutually exclusive traits or tendencies. I am me. The stars and planets and there cosmic dance did not and do not define me and yet they did play a part by being the foundation of my love of science and exploration and curiosity. Astrology may not be hard, verifiable, reproducible, science; but that doesn't mean it's without value, or that it's merely for parlor games or swindling old people out of their money. It can be used as a powerful channel to introspection and personal honesty through which you can blossom as an individual. It's not about being right or wrong, it's about opening the discussion and forcing you to look inward to decide where it's pegged you and where it misses the mark and whether you're okay with that.

Here are the articles I promised you earlier:

Read next: Hidden in the Stars