by Tonya H. 11 months ago in fantasy 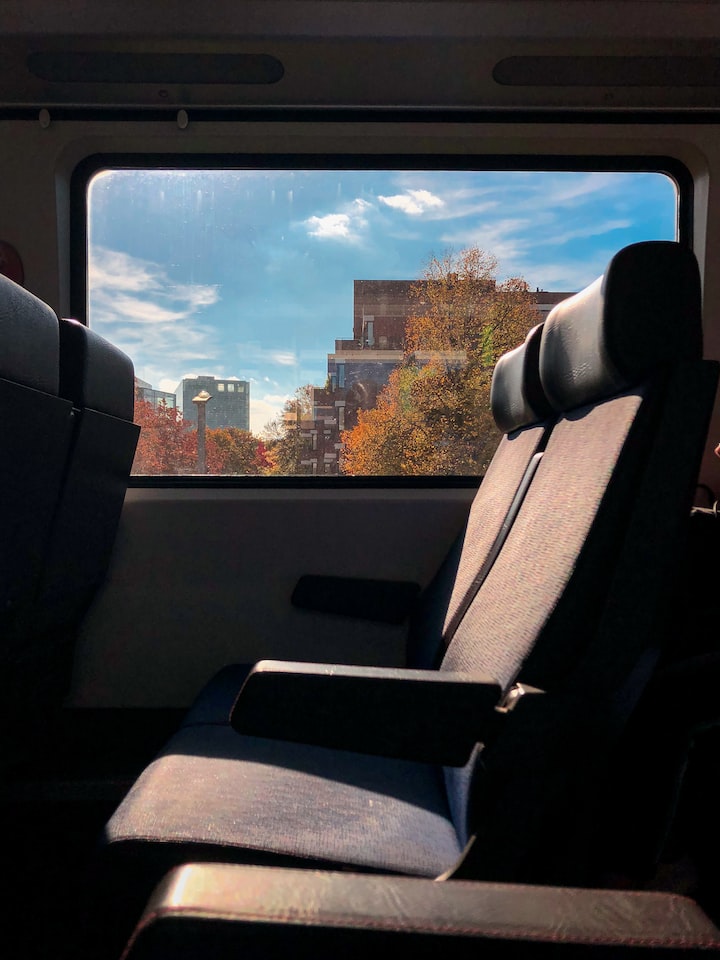 Photo by Lucía Régules on Unsplash

A young girl sits on the corner seat im the car of an overhead train as it rumbles along its track. She's wearing an oversized, faded, beige hoodie, black leggings and dirty white sneakers. Looking closer you see that her wild curly hairy is matted and a little unkempt. Her lips, full for her narrow face, are a little chafed. She is curled in on herself, her arms hugging a black notebook tightly to her chest.

Kennedy slowly looks up from her seat, checking if anyone is watching her. No one is. In this world she is invisible. There are too many different types of beings here none of them paying attention to a young human girl curled up on a train. Everyone is focused on something else: engrossed in their phones, reading or simply napping as they head to jobs that they neither love, nor hate, but simply do.

She peers outside the train window. Looking down she can see the tall buildings of the city and hear the everyday traffic. She sniffs. The air has a smell…mechanical. She hates it. She hates this city. It had done nothing but take from her, and it had never given her anything back in return. The only thing she had of value, was the book she hugged so closely to her chest. She looked higher. A lone bird was flying overhead. She watched it until it became a black speck. She wished she could fly away from this city, and go to a new place; a new world. She released the book to her lap. It flipped instantly to a blank page. She reached into her pocket for her pen and wrote her thoughts down very quickly and shut the book. She looked around before bending her head between her knees.

She sat this way for three stops and then she got off. She walked out of the subway slowly shoulders hunched, hoodie pulled tight. This part of the city was dangerous. More than humans lived and worked here. This part of the city was filled with all types of magical and mystical beings; the dwarves with their crazy beards, the witches (or mages, as they preferred) with their pointy hats and sticks, and even a few vampires. All dangerous in their own way especially to a human.

She sighed. She was here to find a job. At this point she was desperate. She had seen a flyer for a company that would hire ANY type of being; even a small frail human. She was scheduled for an interview and she was determined to get a job. As she approached the entrance of the building she saw that the lines were queued by species. Each species was interviewed by their own kind so they could be assessed and assigned jobs based on their abilities. As she steered towards the human line she felt a small, rough hand push her stomach.

"Watch where yer going, yer clumsy human..!!" a dwarf glared up at her. She peered down at his rough hardened face.

"The interview." she said, a little bit louder.

"Then go join the rest of yer humans in line until it gets to yer turn..!!" he shouted, with disgust on his face; "now get over there before I kick you out!"

In her rush to get away she tripped and fell, her book flying out of her hands. As she reached to get her book and began to stand she saw two pair of long legs step in front of her. She raised her head slowly and discovered the palest face she had ever seen. He slowly smiled at her revealing his canines. She jumped back. “Those teeth” she thought “I mean those fangs. He’s a vampire.”

"Hooiiiiii!!!" the dwarf screamed at her again, "yer can't bring any personal belongings to an interview! Drop yer little book in the box outside!!"

She held her book to her chest. Everything was happening too fast and she felt overwhelmed. She took her black book and hurried outside. Taking a deep calming breath she dropped it in the box by the door. She looked at it one last time. She prayed it would still be there when she returned and went back inside.

The interview didn't last very long. After a few questions it was clear that she had very few skills beyond manual labor. The company would contact her and she was asked to leave.

She left dejected and grabbed her book from the bin. Heading back to the train she saw an ice cream vendor. Wary of the area and with little money she approached the ice cream stand slowly. She had tasted ice cream once before, many years ago. It had been a half-eaten cone thrown on the ground by some rich kid who no longer wanted it. She had waited until he walked away before scooping it up to eat it. What she remembered was something cold and sweet and she could feel herself salivating at just the memory. She pulled her book out to write down all the flavors listed on the stand’s placard. She wanted to think about them later, imagine their taste and dream about being able to buy them all. As she flipped through the book she felt her heart drop. This was not the book where she wrote down all her ideas and wishes, her thoughts and most importantly her dreams. This wasn’t her book.

Flipping though this book she found drawings of people, symbols, and writing in different languages. She looked around frantically, and ran back towards the company. She needed to get her book back.

She ran directly to the bin. No black notebook. It was really gone. She was breathing heavily, hyperventilating, when she felt a hand on her shoulder.

The touch jolted her back to reality. A girl, around her own age, was standing in front of her. She had on a pointy witch’s hat. Was she a mage?

"Are you okay..?" the mage girl asked. "I could hear your heart beating like a drum in my head."

"I know it's weird for someone to tell you they could hear your heartbeat but it's just one of my abilities. I can tell what people are feeling from their heart rhythms. From you... I sense fear."

Kennedy looked at the girl.

"...I'm looking for my book," she started, showing the mage girl the black book she held "I dropped it here before my interview but I think someone else must have switched mine."

The girl took the book and flipped through the pages. "Your book looks exactly like this one?"

"I see. I think we might be able to help you. Come with me."

Clarissa led Kennedy to a tent that looked small on the outside, but upon entering became the size of a mansion. She looked around stunned.

"Mom..!!" Clarissa squealed, walking up to a woman who was standing near a bookshelf. The woman turned around and Kennedy saw a beautiful, blonde haired woman, who looked a lot like Clarissa.

"This is my friend Kennedy," Clarissa said. "She needs our help to find a lost book of hers. I thought we could help her with a location spell."

"You should be able to do a spell of that level by now, Clarissa."

"I can't do it as accurately as you. She really needs our help. Pleeeeaaassseee....????"

The woman smiled at Clarissa then looked at Kennedy. She reached for the book. She placed the book on a table next to a crystal ball. She closed her eyes and started chanting quietly. White smoke gathered in the crystal ball. An image of a young man sitting on a rooftop came into view.

"Your book is with him," she started, pointing at the image, "Getting to him will be dangerous. That building belongs to one of the most influential families in the vampire community. A human girl going alone would be suicide."

Kennedy's started to lose hope, and Clarissa felt it.

"I'll go with her" she said, throwing her arm over Kennedy' shoulder. "As long as we don't run into one of their Elders, we'll be just fine.”

"You couldn't even perform a linking spell, Clarissa." her mother objected.

"But, if you run into any trouble don't hesitate to use the vanishing spell immediately. Move quietly and quickly. The last thing we want is a brawl with the vampires."

Clarissa nodded and led Kennedy out of the tent. Her mother watched them leave and recited a short spell of protection. She looked a bit worried. She had felt the vampire on the roof. He knew they wee coming.

As they neared the building Clarissa cast a cloaking spell. There was only one way to the top of the building; the access ladder to the roof. Clarissa wasn’t adept enough for any fancy flying spells.

They hurried towards the ladder, down a short alley. Suddenly, a rat scurried past and Clarissa squealed, losing her concentration. Her cloaking spell came undone. They immediately felt the presence of vampires in the area and knew that the vampires had become aware of them.

"Go," she screamed to Kennedy, tying a bracelet on her wrist "this charm will prevent a vampire from attacking or biting you. Just get your book back. I'll meet you up there, but first I have to hold them off.”

Kennedy nodded. She was scared, but Clarissa had come here for her and she couldn't give up now. She quickly climbed the ladder. She looked down to see Clarissa weaving spells as a group of vampires inched their way down the alley. She swallowed and continued.

At the top she looked around. She thought she saw something move. As she inched closer she realized that it was the vampire she from earlier. He was drawing symbols on the ground when he turned and smiled at her exposing his fangs.

"Hello!" he said, smiling. "You've come to return the book, right?" he waved Kennedy's own notebook in the air. "I've been expecting you."

He motioned for her to sit beside him. She hesitated. "I didn't read your book." he started, staring at the floor. "I realized it wasn't mine after I got here, and decided not to read it."

Kennedy stared at her book in his hands. He continued. “I’m sure you’ve looked in mine. I use it to keep a record of all the places I’ve been. I also have a couple of spells I’ve learned from some mages over the years."

She stared at her book again.

They both jumped as they saw Clarissa’s head come over the sill as she stepped from the ladder. The vampire simply smiled at her. As the vampire and Kennedy exchanged books their hands touched and she felt a slight breeze as they pulled apart.

As they were leaving Kennedy felt her stomach twist with some strange new emotion. They returned to Clarissa’s home under the vanishing spell. Her adventure over, Kennedy promised Clarissa and he mother that she would come back to see them.

Kennedy once again on the train, opened her book to write about her crazy day. An envelope fell out. Inside was a check for $500,000 dollars. The back of the envelope read "Start your journey. I will follow.” She smiled to herself because she had finally learned his name. She thought "I want to see him again and somehow she knew she would.”

Read next: The End