by Horace Wheatley about a year ago in fantasy
Report Story 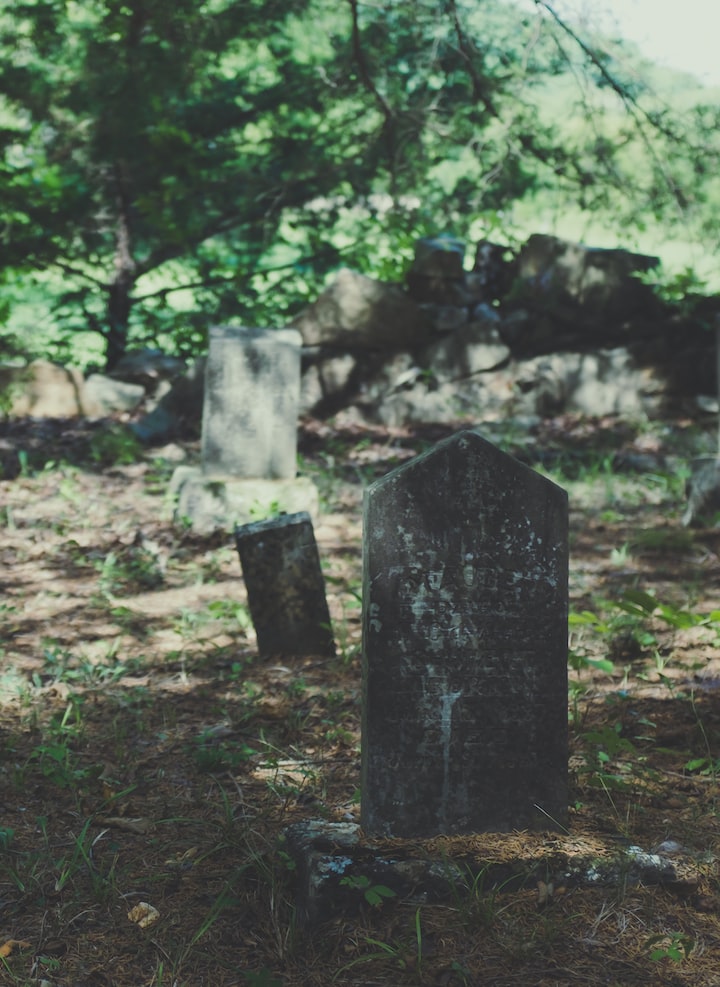 Oracle Jim closed the little black book with despair. He stuffed it into a folder with the rest of the financial report and the overdue notices from the Collectors. With a sigh, he closed the drawer. As if that would make the problem go away.

The Center of Hallowed Blood weighed heavy on his heart. On his desk, there was a certificate from the Mayor. It congratulated Jim for serving his flock and the village for thirty years.

He thumbed the edge of its frame and muttered, “Where has the time gone?”

The One will provide.

But what if The One didn’t?

“What did the letter from Mr. Hess say?”

Oracle Jim knew the Inquisitor asking the questions, taking his statement. He’d officiated their coupling ceremony over a decade ago. Saw them more at the village market than in the Center.

“It was an offer he said I couldn’t refuse.”

The dais was adorned in a mosaic of light from the stained glass. The dark wood paneling was heavily detailed to look invoke The Beyond. The organ pipes were on display behind the obscenely large sculpture of The Sacrificial Beast.

The Eternal Flame flickered in its red holder.

Oracle Jim knelt at the dais railing, hands folded. A sheen of perspiration covered his brow.

“Why, Great One? Why have you led me here, to this place of dreadful uncertainty? Like the Ancients wandering in the wilderness, I can see no way forward. Your rod and your staff, they comfort me, and surely, surely you have followed me all of my days. But your flock have left me, they have wandered away from this shepherd.”

“I can only speculate this comes back to the misdeeds of Carter Hess. But your Way is clear, Great One. I had to bring his misdeeds into the light so he could repent and know of your great love and mercy.”

He took a deep breath in, held it for a beat, and slowly released it. With seasoned eyes raised to the Beast, he asked, “Let your will be done, Great One. Send me your guidance.”

A chime rang through the Center.

The man opposite the enormous wooden breakfast table was built like a barrel, tall as an oak, and had sausages for fingers. His full lips cut through the thick rug of his beard in an eternal grimace. His gray eyes were sharp and piercing.

That is to say, Carter Hess was an imposing presence.

He held the handle of his earthen mug and waited on Oracle Jim.

The old man cleared his throat.

“Well, Carter, thank you again for the ring yesterday. I am most intrigued to hear more about your proposal.” He hoped to avoid any talk of their past interactions and keep the chat focused on the future.

“You will. But first, I want an apology.”

The Oracle couldn’t hold the farmer’s steely gaze. Instead, he stared into the murky depths of his mug.

“Ah, I was afraid of this. I told you why I had to do what I did. The One requires repentance of the flock. I am called to cast out misdeeds however I see it. It has been ages since a Conjuring.”

“Spare me your morality speeches,” Carter grunted. “What I do on my own time is my own business.”

“Business hasn’t been so good for you lately, has it?” Carter waved a mitt-sized hand dismissively. “Never mind, I know the answer. Since your accountability speech, how many have left? I know the Leeches, the Barretts, and the Deschains have all stopped giving and attending.”

“You had to do the One’s business? You are certainly tied to your dogma.”

The Oracle spread his hands, palms up, “It is the vow I took and it is the only way. The Stars say the Great One is perfect and infallible. They mirror our misdeeds and light on our path forward.”

“My loneliness is not a misdeed.”

“Time in the Leech’s bed, with both of them, is enough call for repentance. Your wife was not yet dead! What would she have said?”

“Don’t bring Abigail into this. She was only a bed-ridden shell of a woman after the Longma accident. Brian and Jackie Leech have always looked after us, and us after them. That’s farm life. My actions harmed no one. Yours, on the other hand—”

Now Oracle Jim interrupted, “My actions cleansed the misdeeds of many. The Stars tells us fornication and theft are misdeeds! My call for repentance was justified, Carter.”

Carter lowered his voice to a reedy whisper, “That’s not an apology, but I guess it’ll do. Without the big farms, you can’t keep the doors of the Center open. The Center of Hallowed Blood is bleeding dry. Besides, you’re an old man; where else would you—could you—go? Here’s my offer.”

As the huge man talked, Oracle Jim sank lower in his chair. He withered at the choice set before him.

Behind the Center of Hallowed Blood, there was a squat benefice where Oracle Jim had resided for three decades. Behind the benefice, there was a rough path through what passed for woods down to a stream. He liked to go for a stroll to begin and end his days.

The stream gurgled by, slowly churning like the choice on his mind.

Attend dinner at Carter Hess’s and all of his, and the Center’s, financial troubles would disappear.

If he compromised his belief and crossed the Stars.

To stay and shepherd his flock he would have to fall.

To stay true to the One would mean failure, closure, and exile.

The light faded to deep purple. He walked back up the path to the benefice.

There was a knock and the door opened almost too quickly. Carter Hess filled the door frame. He wore a blue sweater over a white dress shirt, dark gray trousers, and brown loafers.

He’d worn the same thing to Spring Solstice, Oracle Jim recalled. That was before Abigail’s accident.

This is just dinner, he told himself and stepped inside.

Squared off again at the broad table, Carter passed him a plate of seared steaks and a bowl of mashed potatoes.

“Wine?” Carter gestured at the bottle and glasses to one side of the table.

“Just water will do,” he replied, scooping potatoes onto his plate. He had no appetite; it was something to do. Carter poured water from a pitcher into their glasses. Once both meals were plated, Oracle Jim offered a blessing.

“Bless this meal, Great One, that it may nourish our bodies to do the work of the Stars.”

A look passed between the men.

The corner of Carter’s mouth twitched beneath his thick beard.

The farmer carved off a piece of steak and took a bite. Juices flowed from the pink meat and pooled on his plate. All Oracle Jim could think of was Hallowed Blood.

Carter reached beneath the table and pulled up a manila envelope. It bulged like a stuffed scarecrow. He set it next to the wine.

“You’re here, so here you go. Whenever you’re ready, it’s yours.”

This is my last chance, thought Oracle Jim.

“Twenty thousand dollars is a lot of cash, even for a big-time farmer like Hess.” The Investigator didn’t have to frame it like a question.

“Not for what he was asking of me,” replied Oracle Jim. They were on opposite sides of a wooden desk in a statement room. The Investigator kept a notepad at hand to record their conversation.

Now the Investigator twirled his pen and said, “Which was what, exactly?”

“Absolution.” Oracle Jim leaned back in his chair, shoulders slumped. He looked down at his hands in his lap. “Carter Hess wanted me there, uh, when he died.”

“That’s what you told Sage Morton last night. One more time, what happened next?”

Oracle Jim sighed. This was the hardest part.

“He poured a glass of wine and asked that I administer the Ritual. You know? Uniflora oil on the temples. After which,” his voice wavered, “He, uh, added to his glass all of the dowsing powder left over from Abigail.”

“Just like that? No foul play or funny business? You didn’t try to stop him?”

“Of course I did,” the Oracle’s head snapped up. “That’s why I accepted his dinner invitation. There’s always a way forward. The Great One will provide.”

Carter Hess also set a glass potion vile next to the envelope of cash.

“It was ground for Abigail,” he told the Oracle. “Pour me a glass of wine and just dump it in.”

Oracle Jim stared at the items. My mother used to say, “The road to the Void is paved with good intentions.”

“Have you taken care of everything else? Am I clear of entrapment?”

The farmer nodded. “This is just two men getting what they want from the other.”

“What then?” Oracle Jim pushed his potatoes around the plate.

“Wait thirty minutes then send my falcon for the authorities. By the time they get all the way out here, the dose will be in my system and I’ll be reunited with my wife in The Beyond.” He waved an oak arm at the hulking home and the spread of land beyond the view of the picture window. “What good does it do a man to gain all of this and to have lost his whole world, his lover?”

Oracle Jim considered that a good deal. The Stars said something similar.

“It’s your lie, you can tell it any way you want.”

Silence passed between them.

Villagers shook hands with Oracle Jim on their way out of the Center. He couldn’t remember when the seats had been that full. Brian Leech held his grip a moment longer.

“Our condolences, Oracle. I’m sorry you were the one to find Carter gone.” His voice caught. “That’s a terrible weight.”

Oracle Jim thought, You have no idea.

He said, "The Stars tells us every man has a burden to carry. Every day I must choose to pick it up and follow the Great One.”

He thought of all the faces looking up at him as he lectured from the dais.

“The Great One’s people need me.”

More stories from Horace Wheatley and writers in Futurism and other communities.