by D G 7 months ago in science fiction
Report Story

A short story set in the not too distant future 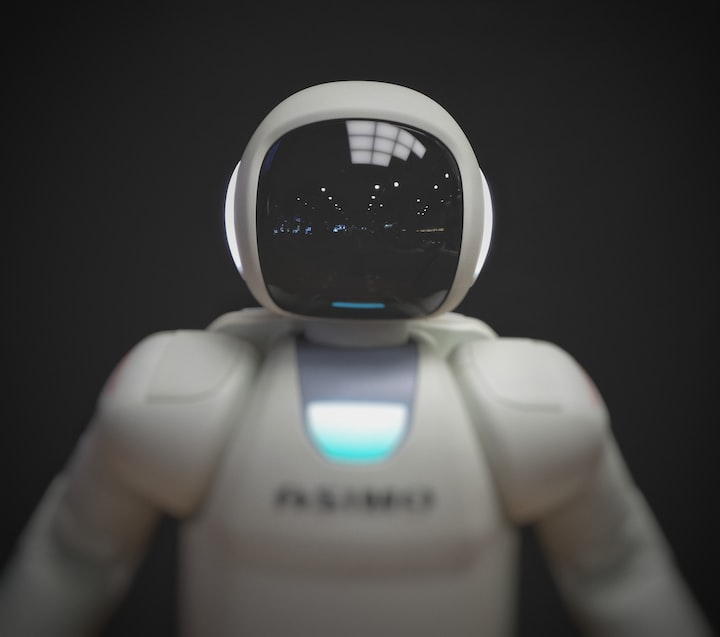 Jerry scans the provided recipe card and watches its process. The H2015 is the newest of the G-Home models, and boasts the best and fastest processing to date. Jerry also got the dexterity upgrade and varied voice response options.

The H2015's eye beam turns green, and it rolls itself over to the counter and takes out four measuring cups. It grabs the Monday Dinner bag from the fridge, removes each bad from the inside, and arranges them in chronological order based upon when in the cooking the bag is needed. Jerry is excited. This was a huge investment for him, but his kids assured him that it was necessary after Judy died. After all, he had never cooked a meal in his life.

The H2015, white and sleek wheeled back over to his fridge where it had sorted the contents earlier in the day, when the kids were over and when they all sat around it in a circle and booted it up. What it had done to his fridge was a work of art. Everything organized by size. Everything accessible. It had become a prop in a tv sitcom, perfect from corner to corner. The H2015 took out Jerry's butter substitute, a juice, and what Jerry assumed was a marinade, and wheeled back to the counter where it put each one in its respective bowl, measured exactly to the milligram. It was so quiet. Jerry strained to hear something, but it was just like the reviews said, "silent." The only thing he noticed was every few seconds it let out the slightest hum, which Jerry believed was the ocular sensor, or some sensor, doing a scan. Jerry liked the sound. It was comforting to be reminded of its presence and the technology at work.

Jerry pours himself a glass of wine and sits down at the kitchen table. He knows the food wouldn't be ready for another 25 minutes according to H2015's clock, but it is a nice place to sit and watch the robot at work. He used to sit and watch Judy cook. She'd listen to talk radio. They would react together to the comments and talk politics, but mainly he would watch her. He'd watch her measure the food and prepare the meat. Watch her take out the pots and pans, the plates, and the cookware. She was so loud. Not like the H2015, which was dead silent. Even the way it placed the pans down, Jerry could barely a thing. Its patented technology kept it from making any unnecessary noise. Its drawer arm, another proprietary technology closed the kitchen drawer with "zero impact". allowing Jerry to maintain its value. Its weight releases kept the H2015 from placing anything down in a way that causes damage. Jerry noticed the silence. As he did the first scents of cooking food hit his nostrils. The H2015 was able to control the stove temperature and modify it by millisecond, allowing for superior cooking of all elements. It was cooking Jerry's onions in hot oil, he could smell them, 308.33 degrees. Brown not blackened. He could hear the Sautee.

A radio inside of the H2015 begins to play, as it goes about uninterrupted. The radio is overtaken by a loud male voice, "This is what these politicians do!" the man says. "He said he'd bring back jobs." The host retorts. "That never happened. Did it?" The caller asks. "When are we going to stop believing these liars?!" He asks.

Jerry watches the H2015 as it cooks with one hand and cleans with the other. It was astonishingly capable.

"What next?" The caller is saying on the radio show. "Are we supposed to just sit back and die?"

Judy would have been going mad with this one, Jerry thinks. "What a nut," he says out loud. The H2105 says nothing. "Speak," Jerry says. The H2015 continues to cook with one hand and vacuums with the other. "H2015" Jerry shouts, "speak." The H2105 does not respond. Jerry picks up his wrist to his face, touches his watch, and says, "Call Jill" and he hears the digital connection vibrating through the inner chambers in his ear bone. Jill doesn't answer. Jerry touches his wrist to end the call, but it doesn't work, he hears her answering machine answer. "Hi, it's Jill, please leave a message or for a faster response text me. Thanks." Jerry clears his throat. "Jill. Honey. Its Dad. I have a question about this thing's voice features. Call me back, okay?" His voice feels weak.

"Turn on some Jazz," Jerry says out loud, and the H2105 changes from cacophonous talk to soothing horns. The H2105 turns off the stove as Jerry notices its clock showing all zeroes. In the blink of an eye, it has plated a gourmet piece of fish, with rice and vegetables. Jerry laughs when it presents a set of silverware and fills his wine glass, all without a sound. Jerry watches through the steam as the machine goes back to the sink to begin meticulous washings of each and every thing that it had used.

It is the best meal Jerry has ever had in his life. He finishes the entire plate, nearly licking it clean. As he stands up to go into the bedroom the H2015 clears the table, using a rag and built-in hose to clear any remnants Jerry left.

The phone rings and it's Jill. "Dad. Everything okay?" she is concerned, Jerry can hear it in her voice. "Yes. Fine." He says. "Did the robot stop working?" She asks, suspecting that was why he was calling. "No, it's still working," he says, "but, I have a question. Does it speak?" He asks. "Speak?" Jill asks. "Why would it speak?" He takes in her criticism. "I guess you're right." He says. "Silly thought." "Are you okay dad?" Jill asks. "I'm fine honey. I am better than fine," he says. "I just had the best meal I've ever had in my entire life," he tells her. "Oh which one did you have?" she asks, and he remembers she has the same one, she'd had the same meals. "The Sole," he says. "Mm mm" she moans. "Yes, that's a good one. Wait till you have the Filet." Jerry is overcome by tiredness. "Okay, Hunny. Well, thank you for calling me back," he says. "Of course, daddy. I'm always here for you if you need me."

As he hangs up the call he watches the H2105 clean the floors and assembles the plate ware. It never stops silently working. As Shorter's saxophone coos him into a post-meal stupor Jerry watches the machine work. Tirelessly and quietly, it takes care of him. If only he had someone to share it with.