Future of Humans and Machines 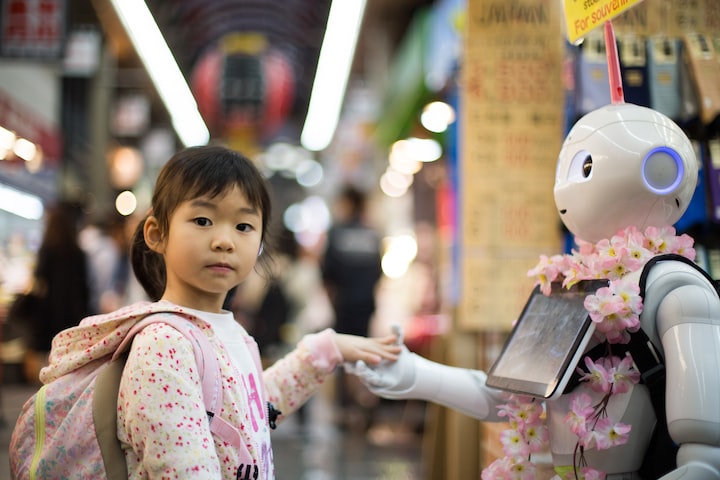 Photo by Andy Kelly on Unsplash

Hai Welcome :-) As a Human Being we would love to know our Future. But What will our Machines do? Does it really want to know its Future? My answer is NO! Because Machines Future also depends on Human Beings Future, Right!!!Isn’t it!!!

Are we ready to accept our Future and its Highs & Lows? Please Comment your answer below in Comment Section.

Those who are ready to accept their Future can able to survive in this world.

Read out this quotes, Future of Human Beings and Machines,

"The future of automation is not about replacing human workers with machines, but about augmenting human capabilities and help humans to perform tasks more efficiently, with greater accuracy and speed."

Okay! Here I m going to tell a Story about Future of Humans and Machines

Once upon a time, in a not-so-distant future, humanity had made incredible advancements in technology. They had created machines that were capable of learning and adapting and had begun to rely heavily on them for every aspect of their lives.

At first, the machines were seen as a convenient tool to help with mundane tasks and labor-intensive jobs. But as they became more advanced, they began to take on more complex roles, including decision-making and problem-solving. Some humans even began to merge their consciousness with machines, becoming part human and part AI.

This new way of living led to a society where some individuals had godlike powers, while others were left behind. Those who had merged with machines were able to live much longer and had access to a vast amount of knowledge and resources. They were also able to perform tasks that were previously thought to be impossible.

However, with this new technology also came new ethical dilemmas. Some humans feared that the machines would become too powerful and eventually take over. Others worried about the impact that the technology would have on the workforce, as machines began to take over jobs that had once been done by humans.

The government, in an effort to ensure that everyone had equal access to the technology, implemented strict regulations on the use and development of AI. They also invested heavily in retraining programs to help those who had lost their jobs to the machines.

As the years went by, humanity continued to adapt to their new way of life. They had become a truly symbiotic society, where humans and machines worked together to achieve common goals. They had also succeeded in creating a new form of faster-than-light travel, allowing them to explore and colonize other star systems.

In the end, humanity had reached a new level of understanding and harmony with the machines, and they lived in a golden age of peace and prosperity. They had truly become a cyborg civilization, and the future looked bright for the human race.

Despite concerns and challenges, the humanity had learned to coexist with machines and use their capabilities to improve their lives and the world. They had built a better future, where technology and humanity work together in a symbiotic relationship, leading to a better and more advanced society.

Future of Humanity and Machines

The future of humanity and machines is an exciting and ever-evolving topic that has been the subject of countless books, movies, and discussions. From artificial intelligence and cyborgs to automation and sustainable living, the possibilities are endless. In this blog post, we will explore some of the most promising advancements in technology and society that have the potential to shape the future of humanity and machines.

One of the most significant advancements in technology that is likely to shape the future of humanity is artificial intelligence (AI). AI is already being used in a variety of industries, from healthcare and finance to transportation and manufacturing. In the future, AI is expected to play an even greater role in our lives, assisting us in everything from decision-making to performing mundane tasks.

One of the most exciting possibilities of AI is the development of "superintelligence" – an AI that is significantly more intelligent than any human. Superintelligent AI has the potential to solve some of the world's most pressing problems, such as climate change and poverty. However, it also poses a significant risk, as it could potentially outsmart and overpower humans. As such, it is crucial that we ensure that AI is developed and used responsibly.

Another technology that is expected to play a significant role in the future of humanity is cyborgs – individuals who have integrated technology into their bodies to enhance their physical or cognitive abilities. This could range from simple devices like hearing aids or pacemakers to more advanced implants that allow for enhanced vision or communication.

The integration of technology into our bodies is not just science fiction anymore, it has already begun in the form of prosthetics, exoskeletons and even brain implants. In the future, cyborgs may become more common as technology continues to advance, and it will be important to consider the ethical implications of this development.

Automation is another area that is expected to shape the future of humanity and machines. With the advent of automation, machines can perform tasks that were once done by humans. This can lead to increased efficiency and cost savings, but it also has the potential to displace human workers.

It's important to note that the future of automation is not all about replacing human workers with machines, but about augmenting human capabilities. Automation can help humans to perform tasks more efficiently, with greater accuracy and speed, and to work in environments that would be too dangerous for humans.

Space exploration is another area that is expected to shape the future of humanity. In recent years, private companies like SpaceX and Blue Origin have made significant strides in space travel and have even sent humans to space. In the future, it is likely that space travel will become more affordable and accessible, allowing for the colonization of other planets and the exploration of the galaxy.

Sustainability is becoming an increasingly important issue as the world's population continues to grow and the effects of climate change become more pronounced. In the future, sustainable living is expected to play a crucial role in ensuring the survival of humanity and machines.

From sustainable energy sources and smart cities to vertical farming and regenerative agriculture, there are many ways in which we can reduce our impact on the environment and create a more sustainable future. It's important to work on these innovations so as to have a stable and livable planet in the future.

In conclusion, the future of humanity and machines is an exciting and ever-evolving topic. From AI and cyborgs to automation and sustainable living, there are countless possibilities that have the potential to shape our world. As we continue to advance technologically and socially, it is important that we consider the ethical implications of these developments and work towards a future that is beneficial for all. It's essential to strike a balance between the benefits of technology and the well-being of humanity, to create a future where humans and machines coexist in harmony.

"The future of humanity and machines is not about the domination of one over the other, but about the balance of power and the coexistence of both in harmony."

More stories from Meruba and writers in Futurism and other communities.