A mental journal of sorts 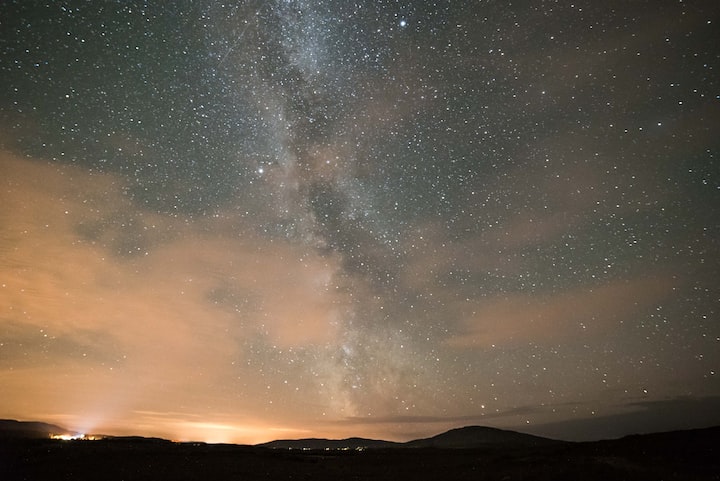 Photo by Kelan Chad on Unsplash

It wasn't meant to be civilised.

For forty days that statement rolled around in my brain. My mission was specifically to investigate the inhabitability of Wylke-27. So far outside of Directorate jurisdiction, and with no previously recorded visits, could it be that the unarguably humanoid population were the result of evolution independent to that on Earth? The likelihood of that... well, I was an ecologist not a biologist or mathematician, but I knew well enough that the likelihood was minute.

While it concerned me greatly to be left ignorant as to the fate of the rest of my crew, I found myself ashamedly far more concerned with the nature of this planet and its history. With no social contact except the fleeting glimpses of faces and hands as I was given my twice-daily meals (notably surprisingly well flavoured), I fell victim to deep spirals of hypothesis. I often examined each element of my meal prior to consumption. So far I had been unable to confirm the presence of any flesh. My first hypothesis: this species, or at least the population of the community to which I found myself at the mercy, were vegetarian. As to the tasty nature of the food, I had three theories. Either they considered prisoners still worthy of good food, the food here is just naturally more flavourful, or I was not a prisoner and thus was being treated to some genuine hospitality.

If the latter were true, it was likely they feared me somewhat. According to Directorate protocol, any inhabited planets were to be contacted prior to a physical visit. Understandably, without that courtesy, this population found themselves completely unprepared for an alien encounter. This led me to my next query, my colleagues knew my destination and, on failure to make contact after landing, would have no reason to delay an investigation. I was actually very important back home. I led various research teams who were pioneering terraforming technology and planetary data collection. I spent the first ten to fifteen days confidently awaiting retrieval by my peers. Today, day forty, that hope was but a dim ember.

It seems necessary to explain the ways in which the population differ physically from Earth-humans. Of those I've encountered, they have a deep reddish, almost purple tint to their skin. Their fingers appear to widen slightly towards the tips, on which they have thick blackish nails. Facial details differ between individuals, but all lack visible lashes or eyebrows. Eye colour, for the most part, appear dark brown. I haven't been able to gather any other details, except perhaps that most are quite tall.

As my mind wandered back to my crew, I realised the most perplexing question: why hadn't they identified signs of civilisation on Wylke-27? I was warned of mammalian life, but not structures and electricity. I had no answer.

I had but a very brief visual scan of the township prior to my imprisonment, and for the life of me I couldn't recollect evidence of electrical power. My humid cell was lit by an apparent sunlight and there was no forced current, just ventilation. What I eventually worked out must be the toilet was more of a seat with a hole that led to darkness but must have required upkeep on the other end. Warm water filled the "bath" every second day without my prompt. The mechanics were all a mystery to me.

Day 41, shortly after finishing my morning meal (a dish I had named "space chili"), the door to my room opened to reveal a slender individual. I kept my distance, waved slowly, smiled and waited. They appeared to be cautious. Taking a small step inside, they tipped their head downwards like a little bow. I mimicked the motion back to them.

"Are my crew here?" I figured it couldn't hurt to attempt verbal communication.

A heavy exhale was the reply I received, presumably a kind of expression of frustration. They then made a motion with their hands (tapping the left wrist with a couple fingers on the right hand, then opening both palms facing together) and spoke to me in a language heavy with "ah" and "eh" vowels. I had no ability to interpret the individual's meaning. I shook my head and shrugged. The individual paused, then motioned to me with both hands, and then made the same motion just to the left of me.

"My crew? Another like me?" I gestured towards myself. Frankly at this point I was agitated that they hadn't given me writing implements or shown me pictures to start establishing useful communication. Nevertheless, I worked with what they offered.

The individual seemed contented at my reaction, and stepped out of the room leaving the door open for me to follow. I kept my head low in a kind of submissive gesture as I exited the room, hoping to convey that I was not a threat. I followed the individual only two doors down the plain, cream-coloured corridor and waited for the door to be opened. My heart sunk as I realised this whole exchange could be to relocate me while my room got cleaned. But when the door opened my eyes widened.

Inside was a shaggy man of about 50-60 years old laying on his bed. He sprung up when he saw me in the doorway, then almost immediately began to weep.

"Whoah, hey. Are you... from Earth?" I was a little disappointed that he wasn't one of my crew, but elated at seeing another human.

The leathery man wiped his face and sighed. "Course I am, Park. Oh god, I can't tell how much it pains me to see you."

My mind raced to put the dots together. I rushed forward to take a better look at the mess of a men bent over in hysterics.

"They haven't graced my room with a mirror, do I really look that different?" asked my old ecology professor.

He laughed at that. An actual, kind of startling laugh. The door shut behind us, the individual must have decided that we would like to talk a while.

"Professor... what's going on? Who are these people? Are they human? Why are we here?"

"What did they say happened to me when I disappeared?" he asked, ignoring my questions.

My mind scrambled to gather memories from six years ago. "They just said you retired or something. Wanted to do some independent research, I think. Honestly, they didn't make a deal out of it. I had no reason to suspect anything..."

"No, of course, that makes sense," said the Professor, nodding. He had stopped crying by this point. I waited, irritated. We may not have long and surely he has things he'd like to know from me. I tried again.

"Sorry, yes. I believe they are human. I believe they were put here a long time ago, hence the minor mutations. And I believe we're here as punishment, or perhaps to keep us out of the way until we're needed again."

He spoke so tiredly, even matter-of-factly. I was unsatisfied.

"Why? I'm sorry, I'm not sure what you were doing before you came here, but I traveled here on my own accord as part of a research mission," I refuted. I was standing now, though I didn't recall getting up.

"Who gave you this mission? I bet it wasn't your choice. And how far into your investigation of the Fandtom twelve were you?"

How could he know? He continued when I gave no answer.

"I knew it. I knew it was all too well hidden not to be a goddamn Directorate-shady-ass-cover-up!"

"Don't you?" his eyes narrowed. "We're living at the mercy of the descendants of the Fandtom twelve. They were never exposed to dangerous gasses on Pahdrid, and they were never quarantined until death on Dylaxick. As we both know, there are no gasses on Pahdrid that match the description given in the report. They were selected, no doubt because of their perceived "limited intellect", as some kind of evolutionary experiment I'm guessing. Maybe as a continuously available biological sample for experimentation. Or maybe the whole planet is just on standby until we reach overpopulation again. Regardless, they were left here, off-record, and they survived. And it could be the greatest scandal and the greatest resource the Directorate possess."

"But... it's been centuries. Can't they own up to it? Absorb them into the empire?"

"The fact that they haven't makes me believe their intentions continue to be inhumane." The professor was back to being tired.

"Okay, fine. Then what's the point of us being here? Why not kill us if we're close to uncovering their secrets?"

The professor turned towards the wall by his bed. "Park, every day I look through that little slit in the wall. I think it's their idea of a window. I can just make out the horizon past the trees. I think the sun sets a little further to the right. I was looking at the horizon forty-one days ago and I saw a ship land. It was the tiniest spec, but I knew what I saw. My heart hasn't beat like that in years. And it kept beating for the rest of the day, through the night, until the next day. I've hardly slept these last forty days because I thought finally, my sentence is over. They've taught me my lesson, I can go home and I'll mind my business. I'll swear an oath, I'll do anything. But when I saw your face in my doorway, I felt sure that I was going to die here. I don't know why we're here, Park. But I'd probably get comfortable."

I slumped back down. Rather than accepting that information, my mind thought of a hundred different ways that I could convince the locals that I was a friend, and more, that I could be useful. But they all required risk on the part of my captors, and they wouldn't lose anything by playing it safe.

I turned to look at him, perplexed.

"Ma'am, I am lactose-intolerant as all hell, and this food's going down a treat. They're goddamn vegan."

I burst out laughing at the thought of it. The professor started laughing too.

"It's tasty, right?" I remarked, wiping my eyes.

"Better than anything I've ever made myself, but honestly that's not hard."

As my sense of urgency diminished, I was able to enjoy my first conversation in over a month. I got the feeling we'd have plenty of time to theorise and scheme. For now, laughter was healing my soul. I wondered whether Wylke-27 inhabitants laughed. I wondered a lot of things over the course of my stay.

More stories from Eriko Jane and writers in Futurism and other communities.