'First Man' Explores the Phenomenon of the New Frontier

by Shandi Pace about a year ago in movie review

'First Man' paints the perfect picture of the harsh realities of space exploration.

When John F. Kennedy delivered those memorable words to a large crowd at Rice Stadium in Houston, Texas in 1962, most thought it would never happen. At that point, NASA’s space program was still in its beginnings. The groundwork had been set for expansion but the majority of leaders and civilians had their doubts on where the government-funded program was headed.

There was no place to go but up.

Thanks to Kennedy’s love for space, more energy and resources were put into launching new missions and ensure the United States remain a leader of the new frontier and of the all-important “Space Race.”

What First Man does in just over two hours is take you through the lengthy process and dangerous path that led to Apollo 11. Although it mainly focuses on Neil Armstrong’s perspective, at times the audience is put into the passenger seat. It allows the viewer to not only witness history as a bystander but as one of the men creating it.

Based on the official biography by James R. Hansen, First Man paints the perfect picture of the harsh realities of space exploration. Highlighted in the film directed by Damien Chazelle, the astronauts trained extensively despite not knowing if they would even make it through a mission. And many of them didn’t. Throughout the 1960s, close to 10 American astronauts died while attempting to improve NASA’s capabilities. Most notably, the crew of three from Apollo 1. Astronauts Virgil Grissom (Mercury 4 and Gemini 3), Edward White (Gemini 4) and Roger Chaffee died instantly during a training exercise for the Apollo 1 mission as a result of a fire within the spacecraft cabin. This was most likely going to be the eventual crew that would make the first trip to the moon.

Ryan Gosling does a tremendous job emulating Armstrong’s mannerisms and quirky midwestern accent to a tee. The moment Gosling takes that first step on the moon, the original tapes of Armstrong’s iconic phrase, “That's one small step for man, one giant leap for mankind,” begin to play. Only then do you realize how remarkable Gosling was in recreating Armstrong’s distinct Ohioan tone.

He also captures the stoic yet emotionally trapped side of Armstrong extremely well. From the death of his infant daughter Karen in 1962 to losing several friends over the course of the decade, Gosling has the ability to exude the right amount of emotion. Even in the movie’s tenser moments, like having to tell his two sons that he may not make it back from the moon, he bends but never breaks. Gosling's character has dealt with a tremendous amount of loss and won't allow himself to fully let go until he's faced with the dead silence of outer space. Claire Foy, who plays Janet Armstrong, is another character that nails her role as a deeply concerned wife. She shows off her emotional distress with just her facial expressions. Her eyes tell the whole story without having to say a single word.

There are numerous breathtaking scenes that highlight space’s beauty. The most captivating moment of all is those first moments on the moon. Shot using LED screens, it feels as though you’re actually on the moon with Gosling and Corey Stoll, who plays the eccentric Buzz Aldrin. The original recordings of the mission were used as Gosling and Stoll land and make their way off the spacecraft. The lack of sound during the majority of the endeavour is impeccable. It’s what makes the moon so eerily surreal in the first place. Paired together with brilliant camera work and the remarkable cinematography from Linus Sandgren, it’s sure to leave you breathless. 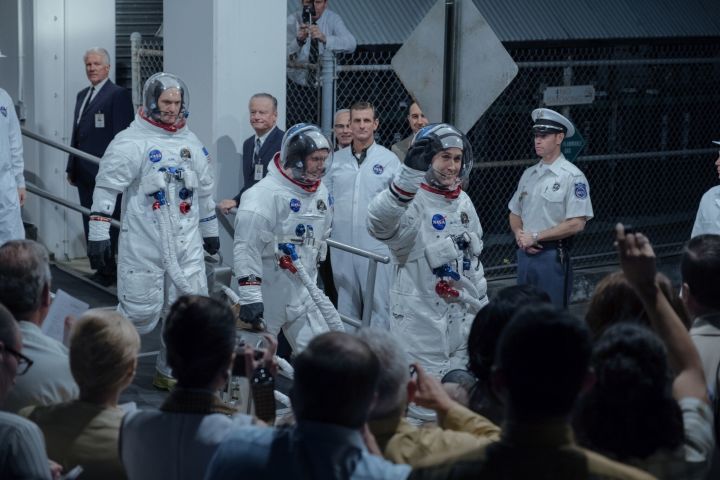 The filmmakers used a mixture of Super 16mm, 35mm, and IMAX film formats for different parts of the film. “We still wanted to think about it as a 16mm type documentary from the ’60s or ’70s but with a more cinematic approach in terms of storytelling with the camera,” said Sandgren. The slight grain of the camera during the majority of the film adds to the sixties era documentary feel. Only once they reach the moon does IMAX camera come in. This was important in the filming process as the astronaut's lives will forever change perspective moving forward.

At its core, First Man isn’t just a film about space. It's about how the man at the centre of it all dealt with death, isolation and letting go. Armstrong couldn't risk taking his emotions to work as it could have had fatal consequences. In the end, while staring into a crater on the moon, he finally releases the sadness that he'd been holding in.

The Space Race and Apollo 11 was a movement that left us striving for more. Was it so crazy to believe that a man could walk on the moon? If we could reach the moon, this far off place that no one had dared to venture to before, we could truly do anything.All the world needed to do was open its eyes to see the limitless possibilities left unexplored and to shoot for the literal stars.