Eyes on the Horizon 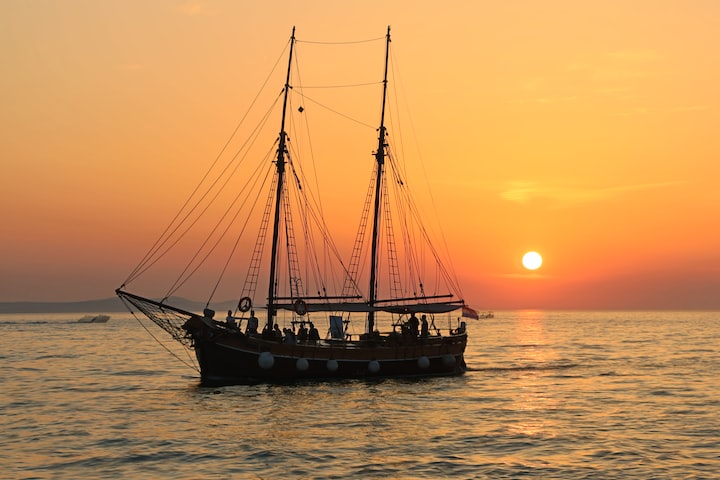 The waves crashed into the rocks like they had done every morning. I stood at the water's edge, searching for something that isn't supposed to exist. My father died declaring its existence. He was hanged for treason on my tenth birthday. For five years since that day, I have come here everyday in the early dawn, through rain and freezing temperatures, hoping to prove he didn't die for nothing.

The last night I saw him he made me promise never to take my eyes off the water at first morning light. With shaking hands he handed me a signal firework and said, “You will know when to use it."

Life on our large island used to be filled with dreamers and pioneers of new worlds. That was before industrial, money-hungry tycoons lied to the common people in order to monopolize trade. Before they decreed any entrance into the water (other than wading for fish and bathing) to be illegal. Before a generation grew up to believe that this island was all that existed and the water too dangerous to explore. Before the term, “sailing” became foreign and then forgotten. Before my dad was arrested and executed for "spreading lies."

I didn't even know what to look for. I never had. But that didn't stop me from coming. My dad never taught me the technical terms; he said it was too dangerous to carry that knowledge. Our powerful rulers knew that knowledge and kept it hidden away for their own use. My dad did tell me that humans were capable of flying on water. He knew because had done it. He had met other kinds of peoples who had glided over oceans to new worlds. These peoples had promised to come here one day and share the truth with our people.

I continued to stare out at the horizon. If what they called a "ship" came to us, would it look like a bird flying above the water in search for breakfast, or a dolphin's fin smoothly slicing through the waves? It was difficult to search because I didn't actually know what I was looking for. Part of me feared this was a waste of time; I should head early to the factory to do extra work, like a good citizen. But good citizens had killed my father. I needed to prove that he didn't die pointlessly. He gave his life for this. It has to be real. Please be real.

This chilly morning I sensed that I wasn't alone. Seagulls scattered as muted footsteps trekking on sand approached behind me. I turned and was surprised to see George, a boy who worked the machine next to mine at the factory. Mixed emotions flashed through me: guilt for being here and excitement (I had always thought he was cute).

"Hello,” he said as he sauntered my way.

"What are you doing here?" I asked.

"I could ask you the same thing." He came closer.

"Having a quiet morning by the water." I replied.

When he reached the water he put his feet in. His body winced at the freezing temperature of the sea. "Shouldn't you be at the factory?” He asked.

"Shouldn't you?" I replied flirtatiously.

He stepped back onto the sand behind me, causing me to turn my back to the horizon. "What's that?" He motioned towards the signal firework in my hand.

"Nothing...just something I found on the beach,” I lied as I slowly angled my body back to the water.

"You know...you're really beautiful,” he suddenly blurted out.

Startled, I turned back toward him. He smiled at me sheepishly as he continued, “Yeah...I always thought so. But in this morning light, even more than ever."

His words made my whole face turn red. "Thank you,” I replied, unsure at what to say.

Suddenly, he smiled bigger — his teeth stretching across his face like a giant canyon. The more he smiled, the less I liked his grin. Something felt off. I began to turn my eyes back to the water, and again words poured out of his mouth. "Your eyes!" He declared.

"My eyes?" I said looking back at him, waiting for his response.

"...are more beautiful than the ocean." His dark eyes gazed into mine.

"You're very poetic this morning." I laughed as I began to relax. I was just being paranoid and I did enjoy his attention.

"It's you. You make me poetic. I'm glad I found you here. Do you want to walk with me back to the factory?” He asked, motioning me toward the land.

"In a few minutes. I want to finish watching the sun peak over the horizon." I said as I faced my body back toward the sea, feeling the warmth of the rising sun.

Suddenly he touched my shoulders and turned my body toward him. "Nothing is as beautiful as looking at you. Come on." He said urgently.

I looked again into his handsome face. It would be fun to walk with him into the factory. All the girls would definitely be jealous. What difference would leaving five-minutes early make anyway? The sun was almost risen and there was still no sign of anything. There never was.

"Okay." I smiled and picked up the hem of my dress, preparing for the trek across the sand.

As we walked the length of the beach, distancing ourselves from the water, George began to relax, looking victorious. But the further we walked from the ocean, the heavier my footsteps felt. You made a promise. You can't give up now. Suddenly I froze.

"No.” I said and turned around, setting my eyes back upon the horizon. I was now running toward the water, feeling lighter with every step.

"Wait!" He panicked while he ran to keep up with me.

I kept my gaze steady and something slowly took shape. It was a blob at first. A black blob against the sun but I knew it was unusual. Yes, I was sure now as I ran closer. There was definitely something new in the water. I kept running toward the water, faster and faster. The blob looked motionless, but it was growing. It appeared to be moving toward me, almost like it was flying on the water.

"You will know when to use it." My father's words repeated in my head like a soundtrack. I never knew how to describe it or what I was looking for, but now I knew this was it. This is what he had called a “ship.” I took the signal firework in my hand and began to pull the ignition.

"WAIT!" George yelled from a few feet away. "Don't pull it. Just let them pass." He said as he glared at the string dangling in my hand.

"Why did you come here?" I asked. He didn't respond so I pulled a little more on the string, as a threat.

"They'll change our way of life. It could be bad. Dangerous! Don't you like our life?" He asked.

"They sent you didn't they? The ones that killed my dad?" I took his lack of response as a yes. "They're scared because they don't want their comfort and power to end. But it hasn’t been comfort for us, George” I cried. He looked back at me stunned. “Don’t you ever question if there's more? Why they're so afraid of us leaving the island? Is it really as dangerous as they say?" I had George's full attention now. "They know there are other worlds out there. They’ve lied to us. And once we wake up to the truth, they won't be able to control us anymore. There has to be more to life. I believe there is more." I pulled the final tug of the string.

A beautiful orange spark flew high into the sky and exploded like a million fire embers. Majestic, it spread like gold across the pink sunrise. The whole island would see it. This explosion was loud enough to end my life or save it, depending on who first noticed it was me who set off the signal.

I turned my eyes away from the fading embers and back to the water. The blob was more defined now. There was a fluttering triangle on its top, like a bird's wing blowing in the wind. It was moving the shape forward. The bottom glided through the water like a knife slicing ice. The ship on the horizon was flying to me. They had come. My dad was right. There was something more. I was saved.